The 22-year-old is already turning heads with his defense, but his trademark might be his smile 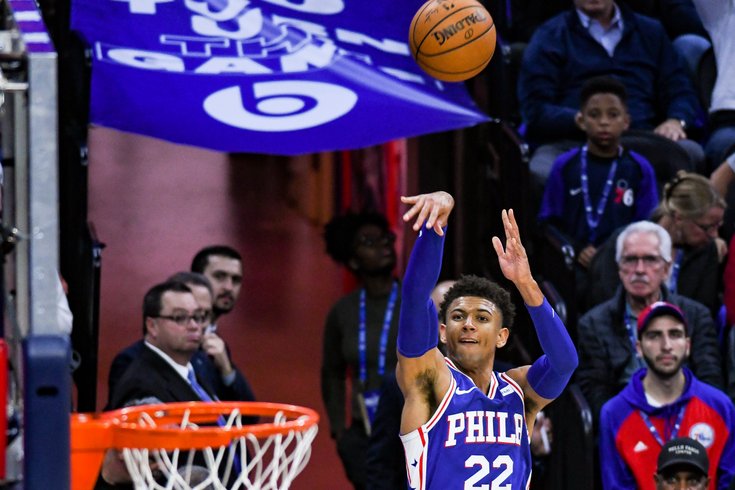 Sixers rookie Matisse Thybulle seems like an extremely positive young man. He works hard on defense, a part of the floor where plenty of players tend to slack off; he's equally passionate about his off-the-court pursuits, like photography; and he's constantly smiling.

Seriously, it feels like half of the Internet's photos of the 22-year-old showcase his smile, which is big and infectious, and a relative breath of fresh air in a sports landscape rife with mean-mugging superstars.

MORE: Sixers, Philly sports back at center of national scene — where they should be | Sixers post biggest opening night TV ratings in over 15 years

Here's the first shot on his Instagram with a Sixers jersey, smile and all:

If you listen to the Sixers' new unofficial Internet Liaison Mike Scott, it seems the smile is quickly and rightly becoming Thybulle's signature.

After Wednesday night's season-opening win, in which Thybulle flashed the defensive instincts and shot-making abilities which so excited the Sixers' front office, Sixers fans were thrilled with the rookie's performance, so much so that some started plotting a Thybulle fan club after just one game:

Can we get a Matisse Thybulle Hive going?

Scott was tagged as the conversation continued, and he endorsed the movement while adding his own take: Thybulle's signature emoji, like Ben Simmons' 😤 and Scott's 🐝, should be the 😄 emoji:

Scott, who at this point is basically a Philadelphia tastemaker, seems to have nailed it once again. Look at this picture and tell me Thybulle's signature emoji should be anything else:

I want to take this opportunity to thank the many people who helped me get here. My dad, My sister, Coach Hopkins, Coach Romar, the entire UW Coaching staff, Eric Hughes, Phil Beckner, Chris Farr, The Lipsen Family, My Grandparents, Jamal Crawford, Spencer Hawes, AG and of course Uncle E. Above all, a huge thank you to the @sixers for making a kids dream come true!!

Scott continued campaigning to make the emoji official Thursday afternoon, sending a horde of the emoji to Thybulle's Twitter account:

Sixers fans replied with a litany of the 😄 emoji, which means we probably have a movement on our hands.

And, just to be sure, Scott went over to Thybulle's Instagram page and left a comment on the rookie's most recent post. As you might've guessed by now, it was just nine 😄 emojis.

Whether Thybulle will adopt the emoji is unclear, but at least a few fans are hoping he makes it his own:

Hop in, folks: Thybulle Fever has arrived, and so far everyone's all smiles.