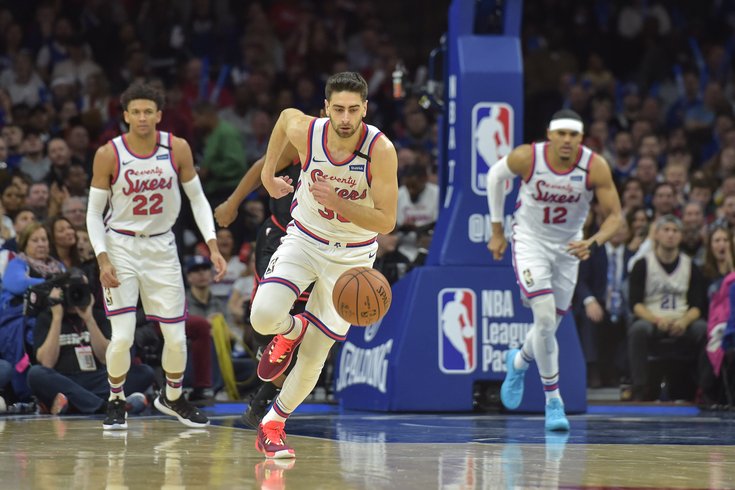 Furkan Korkmaz hit six threes in the Sixers' win over the Bulls.

For one delirious Friday night, it was Furkan Korkmaz's world and the rest of us were just living in it. Behind a huge second half from their bench wing, the Sixers closed out the Chicago Bulls and pushed their home record to 20-2 with a 100-89 victory.

• We discuss it all of the time in this space, but Ben Simmons should be seeking out contact and attempting to dunk the ball more. He has the capability to do this far more often than he does:

Even if he doesn't pull off the poster finish against Lauri Markkanen, he has already put him in a position where he's going to be forced to take a foul to try to stop him. These are the sort of sequences he has to invite because he should be living at the free-throw line with the way he plays. More of this.

• While we are on the subject of Simmons, let me point out once again that almost all of his best work on offense this season is coming when the Sixers actually try to lean into his versatility instead of rolling out the ball, asking him to play point guard, and trying to figure out the rest on the fly.

Has Simmons been a great post-up player this season? Absolutely not. But when the Bulls threw Kris Dunn on him early on, Simmons has more than enough size to seal him off and get easy looks around the basket. Is Simmons a great finisher in traffic? It's hit and miss. But when you can use him as a screener in pick-and-rolls with Josh Richardson, Raul Neto, or Tobias Harris, his ability to explode through space makes him tough to stop as a roll man.

And yes, Simmons absolutely needs to get the ball in transition and take advantage of his gifts there, as you saw in the video above. But whenever the Sixers put players who can set the table for him, instead of asking to do all the heavy lifting himself, Simmons has a better time of it on offense. This doesn't seem overly complicated, and the personnel tweaks that would benefit him would also benefit the franchise center who is currently out with a hand injury.

• We will get to Al Horford's meh defensive night below, but the Bulls are tailormade for him to exploit on offense. Chicago blitzes basically every pick-and-roll, which is a gift to a guy like Horford, who is either going to get an open look at a jumper or space with which to drive. Both of those situations suit him well, and Horford made the most of it against Chicago, knocking down mid-range jumpers and three-point looks alike.

Putting Horford in four-on-three situations is always a good thing, as it allows his passing talent to come to the forefront. Simmons' productive night around the basket can be attributed at least partially to Horford's great entry feeds from the top of the key, and his work on the move kickstarted ball movement that led to open threes for Philly.

On a normal team, we would be able to see Horford replicate this sort of night more, letting his all-around talents shine. Unfortunately, not every team is going to gift you space like the Bulls do with their blitzes.

• Does Furkan Korkmaz just need the bright lights of national television to play like the guy he's capable of being? A smarter man than I will have to answer that question. But I can tell you this, Korkmaz brought the Sixers to life in the third quarter of Friday night's game, and without him and his career-high 24 points, I'm not so sure the Sixers find a way to win this game.

Korkmaz hit a whopping six threes against the Bulls on Friday, with four of those coming in a span of just over three minutes. More time on the floor with Simmons has helped out Korkmaz a lot, as they have started to develop some synergy in the looks the Sixers used to run for JJ Redick. They're both aware of the spots he needs to get to in transition, and Korkmaz's quick trigger helps separate him from the rest of Philadelphia's shooters.

Rarely do we see Korkmaz asked to handle much responsibility on offense outside of spot-up shooting, but the Sixers also allowed him to handle the ball some in pick-and-rolls, where he followed the team trend of making the right read and getting the Sixers four-on-three opportunities headed toward the rim.

And just for good measure, Korkmaz hung in there and competed hard on defense, one of the few guys who did so consistently all night. He is making strides there, small though they may be, even if it doesn't really matter how well he defends when he shoots the ball like he did on Friday night.

• I didn't think it felt like a particularly good night for Matisse Thybulle on defense, but that says more about the high standards he has set for himself than anything else. Despite getting beat on some backdoor cuts and lob attempts to Zach LaVine, Thybulle more than held his own against a guy who can get hot with the best of them, and he came up with some sensational defensive highlights along the way.

He is starting to look like himself again after a tough stretch following his return from injury, and it gives them a lift at a time they really need it.

• No one should ever have to watch a lineup of Neto-Richardson-Korkmaz-Scott-O'Quinn, and Sixers fans were subjected to it to close out the first quarter. This is going to surprise you, but an offense that runs several plays in a row that end in Mike Scott having to make plays is going nowhere fast.

That group is D.O.A. and never should have been on the floor without two of Philly's core-four starters. Richardson was only able to do so much to offset the damage.

• As far as execution goes, I thought the Sixers did a fine enough job on the offensive end against a Bulls team that has had success blitzing pick-and-rolls in a league where it has gone out of style. Philly created open looks and four-on-three situations, which is all you can really ask for when teams play that style.

The other end of the floor was a different story altogether. Whether it was a lack of energy, communication, or some other unknown factor that was holding them back, the Sixers did not bring the proper level of effort against the Bulls for about 2.5 quarters, who were afforded open layups and dunks thanks to a series of blown switches and assignments on the Sixers' end.

It was a multi-faceted issue. Chicago's perimeter players were getting through the first wave of leaky defense, and the help defense wasn't exactly timely once players like Zach LaVine got into the paint. Switches were blown left and right. Transition defense was a particularly pathetic enterprise in the first half, with Lauri Markannen snagging at least three wide-open dunks because he just ran past the Sixers after made baskets.

When an opposing big does that with Joel Embiid in the game it turns into a referendum on his physical fitness and effort level from game-to-game. So what's Horford's excuse for standing there with his hands on his hips as Markkanen picked up freebies? He wasn't a whole lot better in a halfcourt setting, for some reason decided the best course of action was to sag off of Chicago's big men whose best (and really only) traits are their shooting ability.

Horford was far from the only guy who decided to mail it in for stretches, with Simmons deciding he had other things to worry about aside from playing defense, Josh Richardson seemingly running through his postgame plans in New York in the middle of possessions, and Matisse Thybulle getting lobs thrown over his head all night.

If the Bulls were a better team, they would have blown the Sixers to smithereens. As it was, one of the only reasons they were able to hang around is because the Bulls are deadset on playing a defensive style that gives opponents open looks and lanes on a constant basis.

Thankfully, Philadelphia turned it up a few notches in the second half, and that coincided with Korkmaz turning into the Human Torch for a quarter and a half, which earned Philly a relatively easy home victory.

• There was only one item that could have possibly led this section. Furkan Korkmaz hit a corner three late in the first quarter, and the Bulls were going absolutely bonkers on the floor and from the sideline. The reason why? The Sixers had created that open shot because they had six guys on the floor. Whoops!

Fake news Philadephia thought they could pull a fast one playing 6 on 5! Sad! pic.twitter.com/8n1hGz0FLp

I don't know who was ultimately responsible for the screw-up, but it cost the Sixers the made shot (which in fairness, they didn't really earn) and resulted in a technical free-throw for the Bulls. You expect this stuff from a team of eight-year-olds, not a professional basketball team. Ridiculous.

• The Sixers executed a full-court trap perfectly after a pair of James Ennis free-throws late in the third quarter, and Furkan Korkmaz was wide open on the perimeter on the same side of the floor as Kyle O'Quinn, who was the man who ended up with the steal. O'Quinn never even looked in his direction. Come on, man! The guy was in the midst of a heater.

• Josh Richardson came up grabbing his elbow after a collision in the third quarter, and while he didn't immediately come out of the game, he did end up sitting down the stretch with Korkmaz in the midst of cooking the Bulls. He remained out on the bench in the fourth, so doesn't seem like anything serious, but we'll check in with him after the game to make sure everything is tip top.