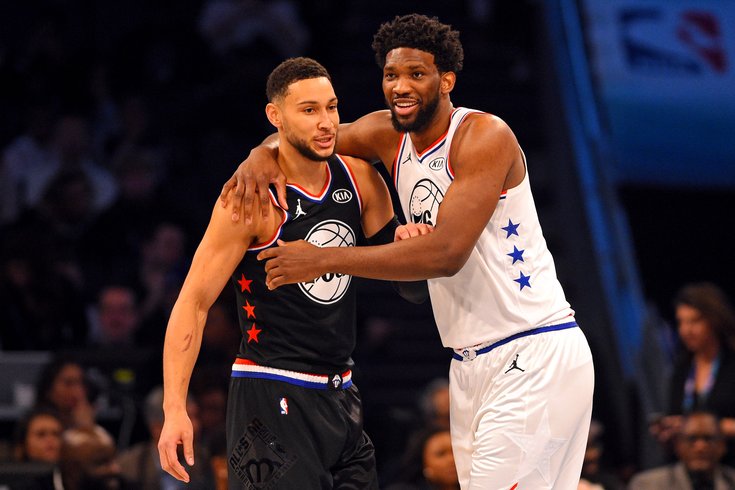 Joel Embiid and Ben Simmons share a moment during last year's NBA All-Star Game, when they played against each other.

It may have taken a week longer than he would've liked to get the call, but for the second straight season Ben Simmons will represent the Sixers in the NBA All-Star Game, joining teammate Joel Embiid, who last week was named an All-Star starter for the third year in a row.

It will be the first time a pair of Sixers teammates have been named All-Stars in back-to-back years in quite some time:

Per @bball_ref, @BenSimmons25 and @JoelEmbiid are the first @sixers teammates to be named All-Stars in consecutive seasons since Maurice Cheeks and Charles Barkley in 1987 and 1988.

The news of Simmons' selection came down on Thursday night, just as the Sixers were tipping off against the Hawks in Atlanta to begin a tough four-game road trip. Simmons, who finished seventh in the Eastern Conference among guards in the initial voting, finished high enough in the reserve voting, which is done by the current crop of NBA coaches, to be one of the seven East players voted in. In the voting for the starters, Simmons was eighth among fans, fourth among players and third among the media.

Simmons, in his third NBA season after an injury cost him his first year, has been playing exceptionally well of late, including earning an Eastern Conference Player of the Week nod earlier this month for his play without Joel Embiid, who returned in Tuesday night's win over the Warriors. In that nine-game stretch without Embiid, Simmons averaged nearly 40 minutes per game while posting 21.6 points, 9.3 rebounds, 7.9 assists and 2.3 steals per game. More importantly, with Simmons playing a variety of roles, ones that he may be asked to play more of moving forward, the Sixers went 6-3 without their franchise big man.

Overall this season, Simmons has seen his game improve. Aside from hitting his first two three pointers of his career, the 6-foot-10 point guard has also scored a career-high 34 points (twice) this season. The second of those two games came just last week in a six-point road win over the Nets and was arguably the best game of Simmons' career to date: 34 points (12-14 FG, 10-14 FT), 12 rebounds, 12 assists, five steals and two blocks.

Simmons currently leads the NBA in steals per game, but has seen more than just his defensive metrics improve this season. While some of his numbers remained flat or dipped slightly from previous seasons (largely due to changes in the players around him), Simmons' field goal percentage (.580) and assists per game (8.4) are both career highs. His points per game are down from 16.9 to 16.3, but that's not a bad thing once you realize he's taking fewer shots per game (but converting them into points at a higher rate).

Unfortunately, the Sixers were not able to get a third member of their team, Tobias Harris, voted into the All-Star Game despite coach Brett Brown lobbying on his behalf during a recent session with the media. So far this season, Harris is averaging 19.4 PPG, 6.7 RPG, 2.9 APG and is shooting 35.8 percent from three.

So, who will be joining Simmons and Embiid for the February 16 game in Chicago? Here's a look at all the players (starters and reserves) who have been voted in as All-Stars this year:

Which of these guys will be playing together remains to be seen, however, as the NBA no longer uses the East vs. West format for the All-Star Game. Instead, the two captains will draft players like they would in a pick-up game, regardless of conference, in a special that will air next Thursday (Feb. 6) on TNT.