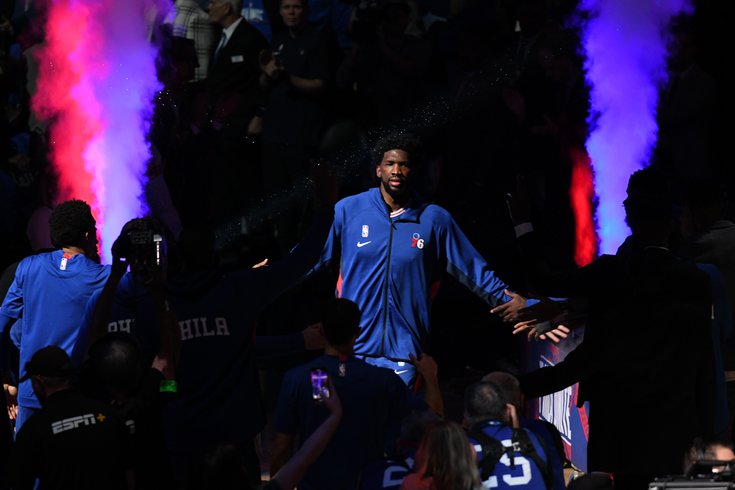 Philadelphia 76ers center Joel Embiid is headed back to the All-Star Game for the third straight year.

Joel Embiid might not have played a game since January 6, but that didn't stop the Sixers center from being named an All-Star starter for the third straight season, something no other Sixers player has done since Allen Iverson in the early 2000s when he started seven straight. And there's no question that Embiid has earned the honor in just his fourth season playing in the NBA after sitting his first two seasons with injuries.

Making his 3rd #NBAAllStar appearance... Joel Embiid of the @sixers!

In 31 games this season, Embiid is averaging 23.4 points and 12.3 rebounds while playing some of the best post defense in the NBA. Unfortunately, there's a chance Embiid doesn't actually get to play in the All-Star Game, which is set for Feb. 16 in Chicago. Embiid is still working his way back from a torn ligament in his non-shooting hand, and while he should be close to a return by then, the Sixers could decide to hold him out of the exhibition.

After all, at 29-17 and in sixth place in the East, the Sixers will need everything they can possibly get out of Embiid down the stretch if they hope to move up the standings and earn themselves home court advantage in the first round of the playoffs (and hopefully beyond). Last year, Embiid was playing through some pain in his knee suffered before the All-Star Game, but the big man opted to play anyway and then missed quite a bit of time in the second half as the injury got worse.

It remains to be seen if Embiid is joined by any of his teammates in Chicago, namely point guard Ben Simmons, who finished seventh among Eastern Conference guards in the voting totals. Simmons will likely still be selected as a reserve, and as you can see from the voting totals below, it was the fan voting that really did him in.

We can debate the impact Simmons’ lack of shooting has had on his actual value as a basketball player, which is significant either way, but the impact it has had on how fans perceive him/respond to him is hard to argue pic.twitter.com/ldEx31ABfM

The good news for Simmons is that the reserves are voted on by NBA coaches, and given his respect among his peers and the media, it's likely that the coaches will vote him in. Unfortunately, you'll have to wait until next Thursday (1/30) to find out who the rest of the 2020 NBA All Stars are.