Plus, breaking down Al Horford's quote about 'some stuff going on in the locker room' and whether there's actually cause for concern 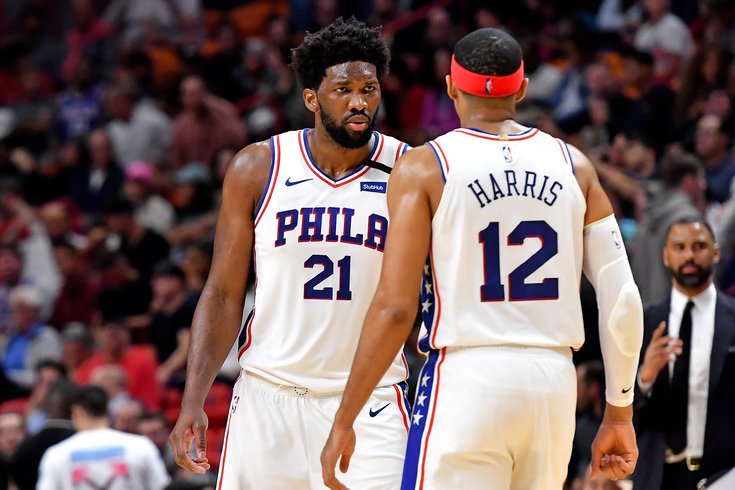 When the best player on a basketball team believes you don't have an offensive identity 50+ games into the season, you might just have a problem. Sound the alarms in Philadelphia.

"No, we don't," Joel Embiid said at practice Wednesday when asked if the Sixers have an offensive identity. "Spacing is an issue. Sometimes we play fast, sometimes we play slow. But at the end of the day when you think about it, and as we are trying to get ready for the playoffs also, the game slows down and it becomes a halfcourt game. That's where we struggle the most. Hopefully, we do a better job in the next three games before [the] All-Star [break]."

I don't mean to be the bearer of bad news, but the games heading into the All-Star break are not exactly the time to discover their identity. Philadelphia goes on the road to play the East-leading Bucks on Thursday, returns for a back-to-back against the surging Grizzlies on Friday, a Sunday evening meeting with the Chicago Bulls, and then a home game against the L.A. Clippers, who finally seem to have Kawhi Leonard and Paul George up and running at the same time.

It is the eternal struggle of this Sixers team, as Philadelphia attempts to shoehorn two centers and a non-shooting point guard into one starting lineup. Embiid, whose talent is most obvious in the post, would love to be able to go down on the low block and attack one-on-one matchups every night. That's not the reality of the situation right now unless a major trade comes down between now and the deadline.

Don't take my word for it, just ask the big man, who verbally committed to spacing the floor and then rethought what that means for himself several times in the span of a single answer.

"From time-to-time, I got to spend a lot of time at the three-point line just to make sure there's some spacing," Embiid said Wednesday. "Everybody keeps saying, 'Get in the post!' but if you actually understand basketball, you've got to find that balance. It's not about me, it's about the team. Whatever I can do to help my teammates or the spacing, which has been a struggle for us, I got to do it."

"So if it means that I got to stay at the three-point line all game, I guess I got to do it. But at the same time, I got to find ways to still maximize what I do best. But then again, there's also a bad aspect because every team doubles me every single game. It's hard, we're figuring it out, it's hard to find that balance, we still got to keep going."

So, he's happy to space the floor, but he wants to be in the post, but the post isn't a comfortable place for him to be because other people can't space the floor. Got it. That all sounds, and this is an unscientific description, pretty terrible.

Before that gets taken as another shot at Ben Simmons, as other quotes have been in the past, consider that Embiid was asked specifically about his desire for Simmons to shoot on Wednesday, and he toed the company line well, reassuring reporters that he and the team want Simmons to do whatever makes him feel comfortable. We can argue whether that is actually what is best for the team or not, of course, but the public stance from Embiid is what it is.

Embiid doesn't appear to be looking for a way out through the trade market, either. He told reporters this group loves and cares for one another, and that he's not going to complain about what he has. At the very least, he doesn't want to be seen as the star who is asking for help when the Sixers have a lot of talent on the roster.

But Embiid would also eventually concede that their struggles on offense have bled into their defense, making the uphill climb even worse for Philadelphia. He cannot hide his feelings on the pieces in place in Philadelphia, which have forced him to make sacrifices and changes to his game to accommodate all the pieces.

"When you look at how we played last year, obviously different structure, the ball movement was better. This year we've got different players, I've sacrificed a lot trying to make everybody feel comfortable," Embiid said. "And that's normal, we all got to sacrifice, if it means taking [fewer] shots just to make sure everybody's happy and we keep winning, that's what we got to do. But at the same time, we still got to understand what's going on around us and how we can help each other be better."

Without a change, I don't see how that's happening anytime soon.

• A quote from Al Horford went round the internet on Wednesday afternoon, so I feel like I have to talk about it even if it didn't feel like a big deal to me, the guy standing next to Horford in this video, at the time it was said:

Here's the full Al Horford quote that everybody is taking the wrong way: pic.twitter.com/e946sXg3iL

This is not all that dissimilar to other quotes Sixers players have given throughout the year. Tobias Harris, Josh Richardson, and Horford have all said during tough stretches this season that they have tough conversations and meetings internally when things aren't going well.

Even off-the-record conversations with Sixers players have included tidbits like this throughout the year. The Sixers lost three straight games in late December, capped by a loss to Dallas at home without Luka Doncic in a week that featured a complete inability to score against zone defense. In spite of a lot of outside concern, a Sixers player who spoke to PhillyVoice after that game insisted they were completely unfazed by it and that they would hash some things out in the locker room and figure it out. They would win their next three straight, including their Christmas blowout of the Bucks.

It is possible there are legitimate issues in the locker room. Anyone who has watched them fold on the road this season would be silly to dismiss that possibility. But in response to a question like, "Does anybody need to stand up and call somebody out?" which is some shit people believe when their understanding of sports is driven by watching Remember the Titans*, Horford offered about as professional of a response as he could have.

(*Consider that the same "reporter" later asked Brett Brown if Ben Simmons' commitment to win was in question because he spent part of Monday afternoon sitting by a Miami pool with his girlfriend. Getting on players for being out partying before games is one thing, but if you believe players shouldn't even be allowed outside before a game, please get a grip.)

Look, this team is in bad shape, and if you're asking me for my personal opinion, I think they're going nowhere fast without a major change. But if they go down in flames, I think it will be because of the offensive identity struggles listed up top, not some nebulous locker room issue. The scrutiny is at an all-time high for this team right now, so at the very least, maybe everyone should watch what they say.