Eytan Shander: Here's why the Sixers should stand pat at the NBA trade deadline 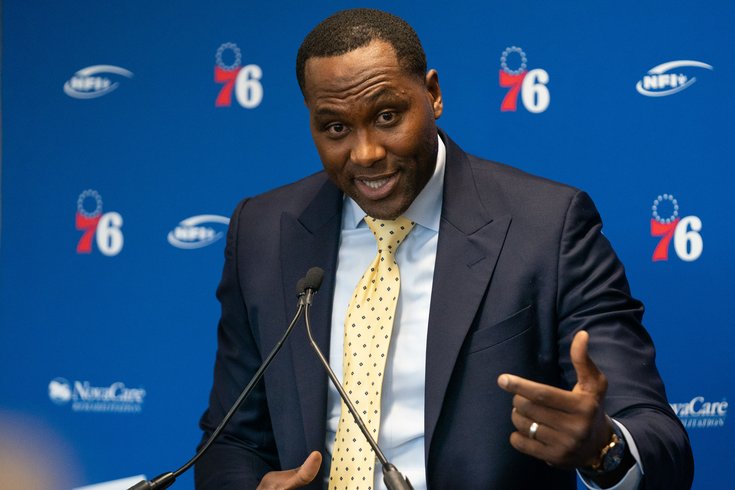 Well, maybe not this year. Unfortunately, the Sixers have taken a step back from where we expected them to be sitting at this point in the season (a top 3 team in the East) and, to make matters worse, their general manager won’t be able to trade his way out of it this time around. As we approach Thursday’s trade deadline in the NBA, so much of what may happen between now and then is based on the need to simply make a deal…again.

There are two defining things working against the Sixers this deadline that will likely prevent any big moves for Philly, and right at the top are their current assets. Outside of shipping away Al Horford – which would be a blatant admission of an offseason mistake – what are we really talking about here? I don’t see a situation where they can command anyone in return who truly makes this team better than they are today.

Is Elton Brand going to ship Zhaire Smith and some back-end first rounders to [insert any seller here] for a guy most people will have to Google? At this point, any move small move would come off as the team simply trying to sell to the fanbase the idea that, “Hey, we get it, the team needs to improve." But surely we can see past this subterfuge.

Making a trade, given their lack of assets, won’t change a damn thing about this basketball team. Three straight road losses by double-digits is inexcusable! Bringing in another mid-level veteran doesn’t change the focus issues, won’t fix the coaching problems and, if anything, only adds a new body into the mix (more on that in a minute). There’s no deeper look or me trying to extract anything more out of this story. It might be the most straightforward column I’ll write here. The Sixers don’t have the assets to trade their way out of a suspect season. That’s the biggest hindrance working against the team.

There’s another weight that keeps preventing any form of true progress, both on the court and in the front office. Every year that they make a trade, especially during the season, they at the very least halt a team trying to gel. Best-case scenario, they push the pause button on a team trying to mesh together on the court, one that we already know doesn’t mesh well with their two stars. Worst-case, they reset, make it to the second round on talent alone, and have to start all over again in the summer.

This is like having a movie cast with two big leading roles – struggling to work together on screen – and continuously changing their supporting actors instead of changing one of the leads. You can’t go from Bob Hoskins on Monday to Eddie Redmayne on Tuesday. You’ll drive the stars and director nuts. But here we are, and just look at the team’s history of moving pieces. It’s like they are compelled to make a deal, just to show you they care.

Let's take a look at their trades over the last five years, shall we?

That is five years of wheeling and dealing that would make late great Monty Hall smile. And because of that, I am not only OK if the Sixers don’t make a trade, I’m advocating they sit still. There’s no one out there that they can acquire with their current stock of assets that can make a true impact this year.

Elton Brand has the power to stop this nonsensical merry-go-round by not making a deal on Thursday. Stop trading just to trade and let the team breathe for a year.

I felt compelled to share this story about a name who deserves a ton of credit for helping his team win the Super Bowl. It’s not “our” own Andy Reid, nor is it the boy wonder Patrick Mahomes. It’s Steve Spagnulo, the – now – highly regarded DC in KC. I got a chance to work alongside Spags at the “old place” working on Anthony Gargano’s show. That was one of the true gifts working on that show, getting access to people like Spags, Brian Baldinger, and Vai Sikahema. When I was fired, I received a text from him – and while I haven’t shared that story with anyone until this week – I still remember his words of confidence. It was more than him knowing me, it was the weight of the words and how functional they were. I remain grateful to Spags and am thrilled for him winning another ring.

What’s the Most Popular Show in KC?

I get it, the NFL isn’t for everyone. However, when your team is in the Super Bowl you REALLY have to hate the sport in order to not watch it. Yet that’s what 3% of TV households were doing in Kansas City during their epic comeback. FOX executive Michael Mulvihill tweeted just how close they came to a complete takeover. My only question is, what in the hell were they watching? The game was on FOX so no "Simpsons." Another sport? Not likely. I just hope none of those “3 percenters” turned off the game to jump to "The Office" reruns.

I had the good fortune of meeting Nestor Garcia and his son, Manny, at FOX 29 on Monday. The father/son duo hails from Bethlehem and will be representing PA in Lego Masters. The new series, hosted by Will Arnett, should bring us all back to our childhood, even those who may have recently left it.

The show looks to mirror some of the team cooking programs but should have a mass appeal with something with such longevity as Legos. Both Nestor and Manny were really excited about the show and representing our area. You can tell there’s a passion to create art and happen to be using a rather unique vehicle in Legos. It’s been a while since I built a spaceship, but I’m excited to root on the Garcia family on Wednesday night.