With Pistons guard Luke Kennard reportedly off the board, could Philly look Bulls guard Denzel Valentine? 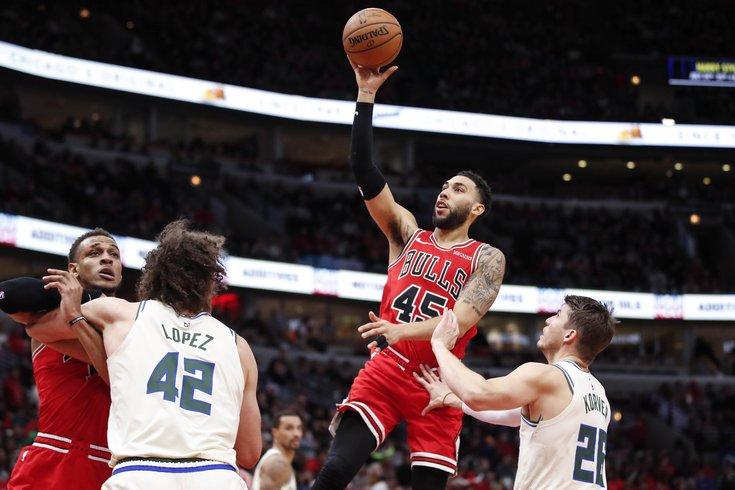 UPDATE [3:25 p.m.] — Here's a new name for Sixers fans to look up ahead of the NBA trade deadline on Thursday: Bulls guard Denzel Valentine. According to NBC Sports Chicago, the Bulls are "open for business" when it comes to Valentine, and the Sixers are listed as one of the possible landing spots for the third-year player out of Michigan State.

According to two rival executives, the 76ers and Grizzlies are possible landing spots for the former lottery pick, who had fallen completely out of favor with coach Jim Boylen before the recent spate of injuries forced him back into the lineup. Valentine for Zhaire Smith; who says no?  [nbcsports.com]

If the Sixers are looking for a young shooter with possible upside that won't cost them a ton, they could do worse than Valentine, who is shooting 35.6% from three in limited action. That's slightly better than another shooter who has been linked to the Sixers, Robert Covington, who is shooting 34.6% from deep. Valentine, however, is only averaging 12.2 minutes and 5.8 points per game for the Bulls, but he's played a bigger role in the past. Last season, he averaged 27.2 minutes per game and started 37 times for Chicago, and actually shot better from three (38.6%) while averaging 10.2 PPG.

It may not be the name Sixers fans are hoping for, but it would be better than nothing, especially if the cost is minimal.

In case you missed it, the Philadelphia 76ers went into Miami last night and got absolutely embarrassed by the Heat, falling to 31-20 following the 127-96 loss on Super Bowl Monday. If nothing else, that loss to the Heat served as the latest reminder that this Sixers team, at least as currently constructed, just isn't good enough.

Sure, Philly has played through some injuries this season and it's seemed like more often than not, at least one of their five starters has been missing from action. And now, with just over 48 hours standing between the Sixers and the NBA trade deadline, Elton Brand and Co. will need to act fast if they hope to get this team back on the right track and in position to earn home-court advantage in the first round of the playoffs, something that seemed like a foregone conclusion at the outset of the season.

The problem for the Sixers is two-fold. For starters, with the league feeling more wide open than it has in past years, this is definitely going to be a seller's market, with many teams still in contention and looking to improve ahead of Thursday's 3 p.m. deadline. Furthermore, Philly doesn't have the kind of assets it's had in the past, and swinging a deal for the kind of big-impact player that could really jumpstart this offense likely ain't happening. Instead, the team will likely settle for smaller, more realistic deals that can offer some kind of improvement, even if it's only minor.

That's because, as was evident against the Heat and the Celtics and Hawks before that, this Sixers team needs to do SOMETHING. With no games remaining between now and the deadline, it's time for Brand to get to work, especially because the longer he waits, the more players get traded, and the higher the asking price gets for the players that remain available.

One player that has been linked to the Sixers, Luke Kennard, could be off the board as a possibility with Detroit and Phoenix closing in on a deal centered around the Pistons guard, per Adrian Wojnarowski:

Unfortunately for the Sixers, they probably can't match what the Suns are offering. And that's for Luke Kennard, who, as Woj pointed out, hasn't played for 22 games! It's only going to get tougher when names get bigger and the bidding increases. Other names the Sixers have been linked to include fellow Pistons Derrick Rose and Langston Galloway, as well as former Sixer Robert Covington, and Thunder forward Danilo Gallinari.

So, do the Sixers have any surprises in store for us ahead of the deadline? Stay tuned to our live tracker below for all the latest news and rumors as they happen: