Live NBA trade deadline rumors: Two potential targets go off the board for Sixers as another emerges

Robert Covington and Malik Beasley are no longer options for the Sixers, but could retired guard Darren Collison be a possibility? 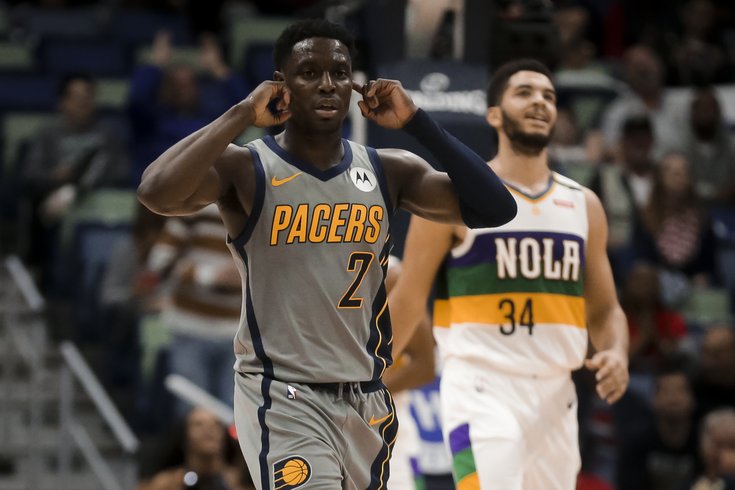 Could former Indiana Pacers guard Darren Collison be an option for the Sixers?

UPDATE [4:46 p.m.] — According to The Ringer's Kevin O'Conner, the Sixers are reportedly interested in Markieff Morris of the Pistons. They are one of five teams — the Lakers, Clippers, Bucks, and Celtics are the others — to have inquired about the veteran forward ahead of Thursday's 3 p.m. trade deadline.

Marcus Morris and the Knicks have everyone's attention, but the Pistons have also received calls from multiple contenders for his brother, Markieff Morris.

The Lakers, Clippers, Bucks, Sixers, and Celtics are among those teams interested in Markieff Morris, per league sources.

Playing in his ninth season, the Philadelphia native is averaging 11 points and 3.9 assists in 22.5 minutes per game. He's also shooting a career-high 39.3 percent from three (4.2 attempts per game, also a career high). Morris, 30, is in the first year of a two-year deal with the Pistons that will earn him $3.2 million this year and $3.6 million next year if he selects his player option.

UPDATE [11:11 a.m.] — The Athletic's Shams Charania joined Alex Kennedy on the HoopsHype podcast and had a few interesting things to say about the Sixers.

For starters, Shams listed the Sixers as one of four teams that could be a possible landing spot for veteran guard Darren Collison, who is eyeing a return to the NBA this month. The other teams mentioned are the Clippers, Lakers and Nuggets.

The Lakers, Clippers, Sixers and Nuggets are among the teams interested in Darren Collison, per Shams Charania on The HoopsHype Podcast. Shams has been told that Collison will weigh his NBA-comeback options over the All-Star break and then make a decision. https://t.co/oK6sC1drLg

The Clippers and Lakers especially make sense for the Southern California native and UCLA product. His interested in returning to those two teams was also reported by Sean Deveney of Heavy.com on Tuesday. Collison, who shocked the NBA world when he decided to retire last offseason at the age of 31, averaged 11.6 points and six assists per game for the Pacers last season. Most importantly for the Sixers — aside from the fact that they wouldn't have to worry about trading away any assets to acquire him — Collison shot 40.7 percent from three in 2018-19 and is a career 39.4 percent shooter from deep.

That last part ties in nicely to something else Shams said about the Sixers on his podcast: "Philly is definitely being aggressive trying to add a shooter."

If that's the case, they better hurry. Collison seems to prefer one of the two L.A. teams as his eventual landing spot, and a few of their other reported targets appear to be off the board already. You can read more about that below...

While many of you were sleeping on Tuesday night, the first Woj Bomb of the 2020 NBA trade deadline was dropped on the unsuspecting basketball world. And, boy, it was a doozy.

The four-team, 12-player deal may not have involved the Sixers directly, but it likely impacts their plans ahead of Thursday's 3 p.m. trade deadline. That's because two of the players involved, Robert Covington and Malik Beasley, had both previously been linked to the Sixers. Now, Elton Brand and Co. will have to turn their attention elsewhere if they hope to improve this season.

More than anything, however, this deal may have reinforced to the Sixers something many of us had already believed: the team simply doesn't have the assets to make a high-impact deadline deal. Here's more from David Murphy of The Daily News:

Covington, the former Sixer, and Beasley, a 23-year-old shooting guard who has seen his role diminished with the Nuggets this season, were viewed as the types of players the Sixers would be in the market for ahead of Thursday’s 3 p.m. trade deadline. And for good reason. For all his faults, Covington would have given Brett Brown a (streaky, less-than-ideal) catch-and-shoot option who does not diminish the team’s defense in the way that Furkan Korkmaz or Shake Milton does. Meanwhile, Beasley is less than a year removed from a breakout season in which he shot 40% from three-point range on 5.0 attempts per game.

Again, though, it's not the Sixers' needs that matter most. It's the price they are willing to pay to fill them. And when you parse through this convoluted deal, you're left with the fact that both Covington and Beasley netted their teams a return that the Sixers would have struggled to match without including Matisse Thybulle in any deal.  [inquirer.com]

In order to land Covington (and Jordan Bell and second rounder) from the Wolves, the Rockets parted with Clint Capela and a first-round pick (that eventually went elsewhere). Aside from the Sixers not having a guaranteed pick in 2020, they also likely don't have a piece like that they could've parted with and still viewed the move as an overall plus. For Beasley, who is essentially a rental, the Nuggets netted that first-round pick from the Rockets — again, something the Sixers don't have to trade because their pick would come with protections and would not be guaranteed to convey.

With a more wide open league landscape than in past years, and with so many teams trying to get better for a late-season push, it seems as though it will be a seller's market this year — and that's not good for the asset-poor Sixers. On Tuesday, it was reported that another rumored Sixers target, Pistons guard Luke Kennard, was involved in trade talks that would land Detroit a pair of players and a first-round pick.

As you can see, netting anything meaningful in a trade, given their current assets, it's going to be tough for the Sixers unless they want to part ways with someone like Thybulle — and I don't think there are many fans who want to see that happen.

There is still time before tomorrow's trade deadline, but it's looking more and more like Brand will need to get creative if he hopes to improve his Sixers. We'll keep you posted with all the latest news and rumors in our live updates post below: