What they're saying: Do the home-happy Flyers have what it takes to make second-half playoff push? 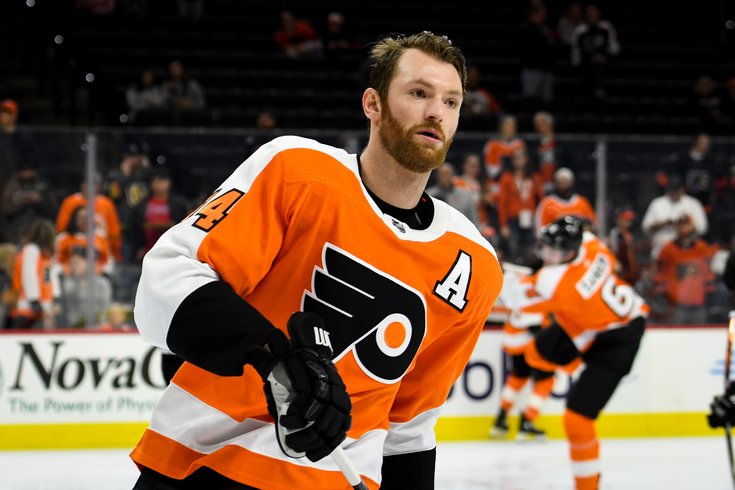 Sean Couturier skates during warmups before a Philadelphia Flyers game.

The Flyers' ended the first half of their season on a high note, decimating their rivals from Pittsburgh, 3-0, on home ice last Tuesday. They won't play again until Friday, when they play those same Penguins on the road.

Aside from Travis Konecny making his All-Star debut in between, not much has happened on the hockey front, as Philly spends its week and a half of down time resting and getting prepped for a sprint to finish the regular season over the next three months.

If the season ended today, the Flyers would miss the postseason by the slimmest of margins — they trail the Hurricanes by a single point with 32 games remaining (27 of which are against quality opponents according to ESPN.com).

Philly's home and away splits are well known by now, as the team is 17-4-4 at home and has some of the best stats in the NHL at the Wells Fargo Center. Away, they are a different team, with a middling 10-13-3 mark. Whether this trend will continue or not is more or less the biggest key for the squad in the second half the season.

Can this team play better at home and make a run? Here's what they're saying about the Flyers at the All-Star break:

First, let's look at what the team can't control: it's brutal schedule down the stretch. If they stumble and miss the playoffs with a lackluster final few weeks, their upcoming slate of games could be an excuse.

Here's what they'll have to contend with:

The Flyers do not through 25 road games. As stingy as they have been at home, they've been the polar opposite away from home. On the road, the Flyers are 10-13-2, have a minus-30 goal differential and are allowing the NHL's second-most goals per game at 3.80.

The figures above are a major concern and the Flyers must stem the tide over their final 16 road games. Vigneault's team still has two trips to Washington, D.C., two to Tampa Bay, Florida, two to Madison Square Garden and one more to Pittsburgh. Those matchups with the Capitals, Lightning, Rangers and Penguins will be stiff tests.

Speaking of the schedule, the Flyers are battling in the NHL's deepest division and have 14 games remaining against Metro teams. The Flyers are in sixth place of the Metropolitan Division (three points out of third place) but would be in first place of the Pacific Division.

The Flyers will be challenged the rest of the way and so, too, will their depth at forward. The Flyers are a middle-of-the-pack scoring club (15th in the NHL with 3.06 goals per game) and without Oskar Lindblom (Ewing's sarcoma) and Nolan Patrick (migraine disorder).

Is the team's youth in the bottom six enough for the playoffs and a competitive shot? Or will (and can) general manager Chuck Fletcher add at the Feb. 24 trade deadline?  [NBCSP]

Walk on the Wild Side

Over at Broad Street Hockey, one of their writers took a look back at their (inaccurate with hindsight) preseason predictions for the Flyers' division. He expected the Flyers to be second in the Metro and, right now, they are in sixth. It has not dampened his optimism or confidence in the 2019-20 squad one bit.

As I said earlier, the Metropolitan Division is one of the toughest in the NHL, and the standings currently sit at a logjam that will eventually sort itself out once in-division games are played. Look at it this way: if the Flyers played in the Atlantic division, they’d be in 4th place with 60 points.

We’ve seen enough from the Flyers to suggest they could be a playoff team if they continue to play well. Kevin Hayes has been the 2C we expected, Carter Hart is looking set to be the Flyers’ long term solution in net, and my word has Travis Konecny broken out. I’ve said all of this without even mentioning that Sean Couturier is playing like a Selke Trophy candidate. The Flyers probably won’t claim a top three divisional spot, not unless the Islanders suddenly realize they’re the Islanders. But, they could certainly take a wild card spot.  [Broad Street Hockey]

Kind of under the radar, Sean Couturier has been having a killer season, and seems to be getting some award buzz for the Selke Trophy — the honor given to the best defensive forward in hockey. Through 50 games, he has 43 points and is plus-15. Midway through the year, the Pro Hockey Writers Association has Couturier as their top choice for the award (an award he finished in second for a few years ago).

A lot can change between now and when the season ends, and according to The Athletic's Charlie O'Connor only twice in the history of the award has a player won it on a team that missed the postseason.

Now, Couturier’s first-place finish — the PHWA doesn’t release midseason vote counts — is no guarantee he’ll come away with hardware. The January vote isn’t binding; writers can (and do) change their opinions between now and April, when ballots are due.

That said, during the past two seasons, the PHWA’s midseason results have often aligned with the final balloting. Of the five awards included in the poll that the writers vote on in April — it also includes the Vezina and Adams trophies even though writers don’t vote on either — the midseason “winner” has claimed the actual award six of 10 times. In addition, 63.3 percent of the All-Star break “nominees” (19 of 30) finished in the top three in final results.

Couturier’s presence at the top of the midseason poll makes it a solid bet he’ll remain in the Selke mix this spring — five of six Selke midseason nominees ultimately received an invite to the awards ceremony. But Patrice Bergeron was the “predicted” winner in each of the past two seasons, and he finished third both years. Couturier still has work to do to lock down the award.  [The Athletic]

Rookies on the rise

The Flyers have never had a rookie of the year (though several have come close, like Shayne Gostisbehere and Ron Hextall), and according to Carchidi, they won't this year either. Still, the Flyers have surpassed the expectations of many and are in a playoff race, thanks in large part to the contributions of rookies. Here's more on some of the team's top freshmen:

Who has been the Flyers’ top rookie performer? Myers gets the nod here, though Farabee is coming on strong. Myers is tied with Minnesota’s Carson Soucy for the best plus-minus (plus-16) among all NHL rookies, and he has contributed 14 points (three goals, 11 assists) in 32 games. Myers is averaging 16 minutes, 45 seconds of ice time.

Yes, Myers has had some puck-management issues, but that will improve with experience. Defensemen generally take more time to develop, and the 6-foot-5, 210-pound Myers just turned 23 on Saturday.

Farabee is only 19, and he is getting better with each game. During a recent three-week stretch, he was on the fourth line, but he is more effective in a top-9 role.

After being sent to the Phantoms for one game because the Flyers needed cap space, Farabee was recalled from the AHL team, and he has points in his last three contests (two goals, assists). He was promoted to a line with Sean Couturier and Jake Voracek on Tuesday and was outstanding in a 3-0 win over Pittsburgh,

Farabee has 15 points (five goals, 10 assists), one fewer than highly touted Rangers rookie Kaapo Kakko, and two fewer than New Jersey’s Jack Hughes, selected No. 1 overall in last June’s draft. The speedy Farabee has displayed a high hockey IQ, has played a gritty, 200-foot game, and has rarely been out of position.  [Inquirer.com]