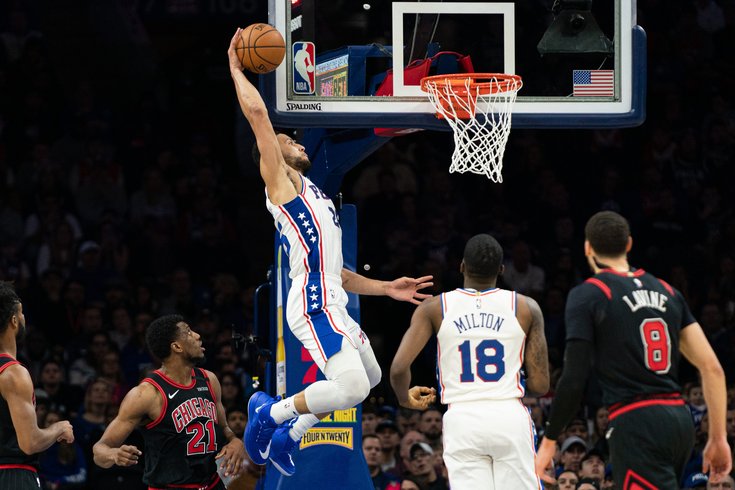 Ben Simmons and the Sixers are back to their winning ways at home at the Wells Fargo Center.

The Sixers made life difficult for themselves with shaky effort in the middle quarters against the Chicago Bulls, but they would eventually emerge victorious in the end, winning 118-111.

Here's what I saw on Sunday evening.

• No one is having a better weekend than Furkan Korkmaz unless you're one of the select few people who were fortunate enough to win an Oscar on Sunday evening. He is absolutely burning down the nets and seems like he's having a heck of a good time while doing it.

The most notable thing watching Korkmaz right now is that teams do not feel comfortable leaving him open almost ever. It's the biggest reason his pump fake has turned into a legitimate weapon — guys go flying past Korkmaz trying to stop him from getting up a quick three, and he ends up making them look silly anyway. He can hit off of the catch, he can hit with a side-step, and he has weaponized that success attacking closeouts off of the dribble.

Sustaining the confidence he's playing with at the moment will be the difference between Korkmaz sticking in the rotation long-term and just being an occasional hot hand off of the bench. We have seen Korkmaz get into grooves before, most notably after he hit a game-winning shot in Portland early this season, but game-to-game consistency hasn't necessarily been there, in part because his value was so reliant on his outside shooting.

But the Sixers can actually run the offense through Korkmaz at times, which is a huge deal, and his defensive reads continue to help him get by with subpar strength on the other end. The Sixers went out and got two guys who can play at the deadline, but it doesn't seem like anybody is going to be able to kick Korkmaz out of the rotation with the way he is playing.

He is scoring early, he is scoring late, the kid is just flat-out killing people right now. Sixers fans are showering him with love right now, and he deserves every bit of it.

• The only guy other than Korkmaz who I thought acquitted himself well on Sunday evening was Ben Simmons, who continues to try to lead by example through how hard he plays. If every Sixers player consistently gave as much effort as Simmons night-to-night, it's reasonable to believe they would have a lot more comfortable wins under their belts at home and on the road.

Simmons had some of the same maddening plays he does every game on Sunday, a couple of turnovers on passes from deep in the painted area that everyone knew were coming, but he controlled the game otherwise. He didn't do that simply by showing up — Simmons erased mistakes by his teammates and created turnovers out of thin air, continuing to build on his All-Defense case,

His recent progression at the free-throw line is a huge deal. Simmons is not just willing himself to the line more, he's actually converting attempts at a 70+ percent clip, which is what his coach has been hoping for since his rookie year. If this is a constant moving forward and not just a momentary surge, it has the chance to transform how Simmons plays.

I am obligated to mention he got a triple-double, but I don't care that he got one more rebound in garbage time. He was a leader for the team in multiple ways on Sunday, and that's what mattered.

• Glenn Robinson III looked a little lost at times on Sunday night, as you would expect from a guy who is suiting up with a brand new team. And while he didn't have a chance to show off his shooting touch too much, he ran the floor in transition and was an active cutter in the halfcourt, picking up a bunch of easy baskets along the way.

It appears Brown's first instinct is to play him in the bench units Embiid is the centerpiece of, which I think is the right instinct for his skill set.

• The way Joel Embiid came out of the starting blocks, you would have thought he was on pace for a 50-point game at home. Embiid went to work against Luke Kornet early on, forcing a couple of cheap fouls and getting himself to the line instead of settling for jumpers. He would eventually find that groove again late in the game, punishing Kornet in single coverage to open the fourth quarter and helping to carry the Sixers to a win.

For whatever reason, Embiid went missing in the middle stages of the game. It wasn't for a lack of effort from Philadelphia. His teammates created some really easy looks for him around the basket and Embiid's touch and assertiveness just wasn't there — he hesitated on a few potential dunks and layups that appeared to be there, only for the window to close.

That's an area where I certainly give him some benefit of the doubt with his hand, as it can't be easy to shoot with a splint on your guide hand. The janky lineups with Horford also continue to weigh him down, because when he was able to go to work in lineups built around his post-ups, Embiid certainly looked closer to his older self.

But set aside his hand for a moment and it seems clear Embiid lacks the level of explosiveness he had just two seasons ago, when he was capable of skying for blocks, rebounds, and dunks in a way that he doesn't seem to be anymore. When you don't have that extra level of athleticism to create separation, you become more reliant on finesse, and Embiid's touch, like everyone else's, can come and go.

That's been apparent all season but is pretty concerning nonetheless, as it's hard to figure out what the root cause is. And that's before we talk about his defense, where he made a number of nice plays but followed those up with gaffes that are beneath a defender of his caliber. Maybe this all changes when they hit the playoffs.

The Sixers need Embiid to lead by example when he is on the floor, whether it's for five minutes or 35 minutes. I get that it's the Bulls and they can sleepwalk to a win anyway, but I have higher expectations for the big fella, even when he's able to put up 28-12 in a home victory.

• Tobias Harris earned a lot of due praise for his defensive improvement to start the year, but he has slipped big time recently, and it is an under-discussed part of their recent swoon. Bad habits he had cut out, like gambling too far off of shooters, getting beat to spots on drives, and letting down before a play is finished, are leading to offensive rebounds or easy baskets for the opponent.

And with the way the team is operating at the moment, Harris isn't making up for these lapses at the other end, which is where the bulk of his value is supposed to come from. Harris found himself unable to beat Zach LaVine in one-on-one battles, a matchup that is tailor-made for him to win.

You can have off nights on offense and tough days on defense, but you can't have both at the same time. He has to renew his commitment as a defender because it has been nowhere close to good enough.

• I'm not sure if it makes his teammates or his coaching staff feel better, but I can tell you this, watching Al Horford clap his hands after standing flat-footed and getting beat to a rebound is getting pretty old as an outside observer. Those are plays that don't have anything to do with fit, his declining athleticism, or bad matchups for him. They are lazy, mental errors that are supposed to be the antithesis of what he is about.

You would think the guy who is supposed to be Mr. Professional might box somebody out every so often. Apparently that is too much to ask. He wasn't the only guy who was lazy on box outs, for the record, but stick with me here.

It's not like Horford is adding much more on top of that. He is badly missing shots that have gone down for him his whole career, losing physical battles to undersized guards like Coby White, and made to look like he's moving in quicksand by any big man with juice in their legs. Things are not getting better for him even when he's in lineups that make more sense for his talents.

But I'm sure they'll turn around in one of the next three years where he's under contract, getting older and less athletic.

• Josh Richardson needs some time to get acclimated again, clearly. And he certainly should not be the backup point guard moving forward, especially now that the Sixers brought in deadline reinforcements. They need him to find his footing again ASAP.