Instant observations: Sixers bounce back with comfortable win over Grizzlies 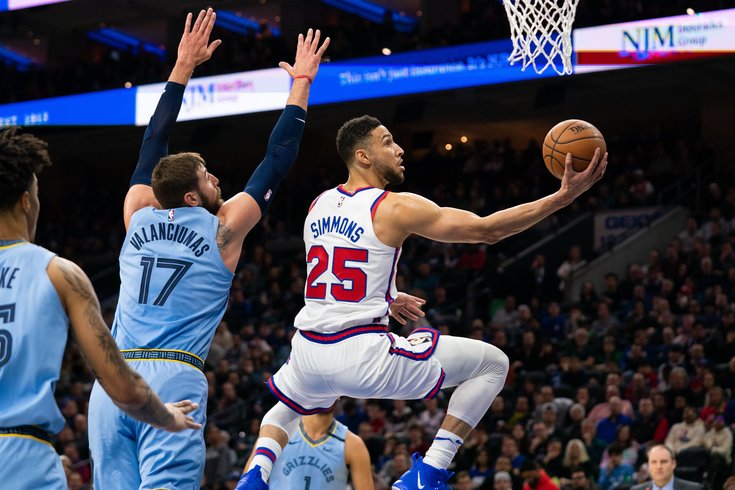 The home Sixers, not affiliated with the road Sixers, got back to their usual domination with a much-needed win on Friday night, blowing a hot Grizzlies team away in a 119-107 victory. There are still questions to be asked about this group, and lineup problems to solve, but a comfortable win should be good for everyone's soul right now.

• There was a noticeable difference in Philadelphia's defensive energy from the opening tip on Friday night. Their offensive struggles are going to continue as long as they have this demented personnel group, but they have no excuse to struggle on the other end, where they have a group of guys who can lock up any team when they want to.

Memphis has a lot of young talent, but Friday's game was a reminder of how big and athletic the Sixers are when they're close to full strength. The highlight-reel plays Ja Morant has made routine this season were few and far between against Philly, with Ben Simmons presenting a difficult puzzle for him to solve and the rest of the team getting their work done on the back end. And it wasn't just on defense where you saw and felt a physical difference.

With multiple Grizzlies players battling foul trouble throughout the first half, Memphis had to hand out extra minutes to De'Anthony Melton, who has been a nice piece for the Grizzlies off of the bench but is basically drawing dead trying to defend Simmons in single-coverage. After a tough start to the game finishing at the rim, Simmons spent most of the second quarter punishing Memphis inside, striking a good balance between finding his shooters and attacking the Grizzlies at the rim.

This was the first time in at least a couple of weeks where it felt like the Sixers' size and physicality actually mattered, and it was a welcome sight. Credit Simmons for leading the charge there.

• As we all said when they signed him to a deal in the offseason, the franchise is going to go as far as Furkan Korkmaz can carry them.

Jokes aside, Korkmaz has been one of the few overwhelming success stories of this season. Brett Brown trusted him early, much to the chagrin of a lot of people (myself included), riding through some cold streaks and leaky defense on the perimeter. He has emerged on the other side better for it — Korkmaz's blend of floor-spacing and off-the-dribble juice has given them life, and helps tie together a roster with a lot of ill-fitting parts.

What used to be a made shot here or there has turned into legitimate hot stretches for Korkmaz, who has mastered the perimeter pump fake to a point that I think he should be using it to pick up some cheap fouls on opposing players. Then again, he's making so many threes on the fly-bys that it's hard to quibble with his strategy.

Defensively, he deserves just as much credit for his development and commitment. Korkmaz is still a player who can be hunted, but his reads are sharp enough that he can make plays from time-to-time, and it's rare these days for him to be out of position. He could probably use a protein shake or 10 to fill out more, but everything he offers on that end is a bonus.

Korkmaz got a standing ovation from the home crowd late in the fourth quarter as he hit his seventh three to get to 34 points, and it was a deserved moment for a guy who took an unorthodox path to the rotation. Whether he remains in it moving forward is an interesting question — the arrivals of Alec Burks and Glenn Robinson III will loom large for somebody who is getting minutes right now.

• I was half expecting Josh Richardson to walk out onto the floor and look like he was playing on one leg, so it was good to see him showing off some burst and explosiveness against the Grizzlies. The Sixers kept his minutes count down in his first came back, predominantly using him in a backup point guard role, but there were plenty of chances for him to showcase his athleticism.

The highlight of his night was probably the chase-down block he came up with in the waning seconds of the first quarter, but there were a lot of little hustle plays he made that stood out up close, mostly because the team has been coming up short in that regard recently. Richardson almost always plays with an edge, and that is an element this group desperately needs right now.

• Before the game, Brown and Elton Brand both spoke and shed some light on some of the issues plaguing the team right now. And when asked about the possibility of moving Al Horford to the bench for a better fitting starting lineup, Brown left the door open to the possibility, suggesting everything will get looked at closely over the All-Star break.

Some of the lineup choices in the first half suggested they are already starting to prepare for some changes to the rotation. Tobias Harris, who is often attached to Simmons and Horford, spent some time playing power forward next to Joel Embiid with bench groups in the first half, a look I discussed when projecting the rotation moving forward. With Embiid exiting in the game at halftime, we didn't get to see how much Philly really wants to tinker, but it appears there are changes on the horizon.

That quietly was a big deal for Harris, who I continue to believe is in his ideal role when he's on the floor with more guards and wings rather than as the wing that needs to carry the offense. And by the way, that's true for basically every basketball player — when you play with more guys who can dribble and shoot, the game becomes a lot easier on offense. Maybe the Houston Rockets are on to something.

Everything should be on the table for the Sixers right now. They came out and smoked Memphis on Friday night, but they can't count on shooting well from all over the floor night-to-night, and the key to unlocking their upside is, well, playing lineups that make sense instead of putting multiple centers on the floor at a time.

• Booed during pregame introductions, booed after his first missed shot, booed after a miss in the third quarter, Horford may not find himself on the good side of Philadelphia fans anytime soon, if ever. And honestly, Horford was mostly fine on Friday night.

Some of the issues aren't really his fault and are more a product of a clunky fit that was always going to make life difficult for Horford and the rest of Philly's frontcourt-heavy roster. He has picked up his outside shooting a bit over the last couple of games, but he is clearly not equipped to play a bomber's role from deep, where it often looks like he's rushing into shots instead of getting his feet set and then letting it rip. Even in the areas where he has traditionally been good, like the mid to low post, Horford is often struggling to generate leverage and attack.

If Embiid is going to miss any time due to the neck issue that forced him out of Friday's game, it is obviously better to have Horford than it would be to rely on a backup rotation of Norvel Pelle and Kyle O'Quinn. But if you're in the process of trying to win over the fans, Al, I would suggest perhaps not shushing detractors in the home crowd as you pick up your 10th point of the game. You don't have enough clout in Philly to play the heel — and the history in Boston really makes that tough.

• I don't really know what to say about the home-road discrepancy anymore. It is great that the Sixers are able to turn it up on their home floor and blow teams out of the water. There's just no reason they can't play with the same attitude when they take this show on the road, whether the shots are falling or not. This isn't some terrible team the Sixers just beat the hell out of — the Grizzlies have been great since the start of 2020, and they got absolutely run out of the gym.

I can tell you this: the Sixers better play with the same mentality all the way to close out the portion of their schedule leading into the All-Star break. It's obvious that they can clear high bars when they decide to show up.

• You know things are going poorly when a home team is getting booed during pregame introductions. Coming off of a brutal road trip, that's exactly what happened to the Sixers on Friday night, with the fans booing throughout the entirety of their elaborate lineup announcements.

The loudest boos, from my judgment, were saved for head coach Brown and Horford. That doesn't seem surprising taking a bird's eye view of the situation, though it was still a little jarring to hear Embiid get booed before a game had even begun in a city that unabashedly loved him for years.

But I'm not here to tell anyone they were wrong for doing so. This group has played far below their talent level over the last week and a half, and frankly for stretches of this season, and if you're paying to be entertained by them, let 'em have it when it feels right.

• While we're on the subject of Embiid, he never emerged from the tunnel at the beginning of the second half, and within two minutes in the third quarter he was ruled out with what the Sixers designated as "neck stiffness." That's not the sort of thing you often hear as a reason a guy is ruled out, so it's slightly concerning to say the least.

Up until the point where he exited the game, I thought Embiid had a solid, if unspectacular game. He proved much more willing to do the dirty work than he had in other recent games

We will keep you posted on any further developments with the big fella, but as always, the Sixers can never take a step forward without at least one or two back.