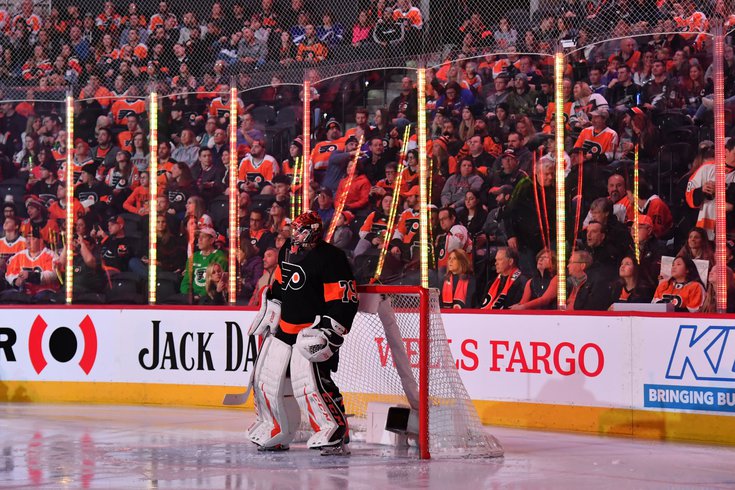 Philadelphia Flyers goaltender Carter Hart won't have thousands of Flyers fans directly behind him when the playoffs start, but he knows they'll still have his back.

Dennis Williams watches from a distance and laughs. He’s seen this all before from Carter Hart, a Clint Eastwood-squinting Richie Cunningham on ice skates. The head coach of the Western Hockey League’s Everett Silvertips coached Hart in his final season of amateur hockey — the last time Hart appeared in a playoff series.

Williams also knows something else: Carter Hart encased himself in a bubble long before he ever entered the NHL’s playoff bubble in Toronto this summer.

Right now, the Flyers are poised to do something that they haven’t done in 45 years — win a Stanley Cup. If they do, it’s because of the uncanny poise and focus of a 6-foot-2, 190-pound goaltender who’s going to turn 22 on Thursday, with a penchant for cheesesteaks, the Eagles and Philadelphia.

It’s almost as if he invites it. The more shots on him, the better he gets. Local and national media rave about how unflappable he is. He’s actually been that way for some time.

And this situation Hart currently finds himself in is not much different from other major amateurs tournaments in which he played.

“I think it’s very similar to a World Championship almost where you’ve got three games a day,” Hart said. “You’re watching a lot of hockey. You’ve got all the teams at the hotel. It kind of reminds me of those kinds of vibes and minor hockey tournaments back in the day, which were always a blast.

“Here in Toronto, they’ve done a really good job of setting things up for us. We’re at a really nice hotel. We’ve got a lot of things to do in our spare time. A lot of hockey to watch. I think we lucked out here in Toronto.”

Hart calls it luck. The people that know him know better.

The last time Hart was in the playoffs, which the Flyers open up for real in a best-of-seven series against the Montreal Canadiens on Wednesday, was in the WHL two years ago.

Hart earned 2017-18 Goalie of the Year in the Canadian Hockey League, which is comprised of three member leagues, the WHL, the Ontario Hockey League and the Quebec Major Junior Hockey League. Think of it as the goalie equivalent of the Heisman Trophy for the world’s best young goalie — and he’s the only player in CHL history to win the award twice (2016 being the other year).

During the NHL’s round-robin phase against the Boston Bruins and Tampa Bay Lightning, the best two teams in the NHL’s Eastern Conference, Hart has stopped of 57 of 59 shots, and carries a .966 save-percentage.

His excellent play of late has the Flyers favored in their Eastern Conference quarterfinal matchup against the Canadiens. They are currently the favorites to win Game 1 on Wednesday night (-149 at DraftKings and -165 at FanDuel) per TheLines.com. And they are tied for the best Stanley Cup odds of anyone in the NHL.

The skills that got him here are even sharper. He can be in two places at once, where he’s seemingly out of position, and comes from nowhere to make a save. That’s his innate instinct to read plays before they unfold, reading odd-man rushes, his angle awareness, depth perception — and his intuitive ability to control rebounds.

“I watched him play last week and you can just see in Carter’s facial reaction against Boston that there’s nothing there,” Williams said. “He’s calm, cool and collected and business-like. It’s the same look and stare that he had here in Everett.

“I say to a lot of people that I learned a lot from coaching Carter on what it’s like to already be in a pro athlete mindset. That’s when he was 19. Not too much phases him. He’s able to stay even-keeled. His approach is the same, his demeaner is the same and this just proves how great of a goalie he is.

“His level of preparation, not getting too high or too low, is absolutely the best that I’ve ever seen.”

Against Tampa Bay, Hart was tested early in the Flyers’ 4-1 clinching the top seed in the Eastern Conference. After Flyers’ defenseman Matt Niskanen turned the puck over in the first period, the Lightning’s Nikita Kucherov came rushing in on a breakaway and Hart was there to make a pad save.

“I’m not going to make assumptions based on a round-robin game, but we are in different times and it is not a normal situation, but it is a nice way to get your feet wet,” said former Flyers’ goalie and NBC analyst Brian Boucher about Hart’s play. “It was a good start for him. But I won’t judge him just yet. I want to see how it plays out.

“I still think he has a bright future and great talent. He has a long, long career ahead of him. He has tremendous technical stuff that I see with my eye that he’s going to be a great goaltender in this league.

“He has uncommon poise for someone his age. I don’t get the sense he worries about any situation. I think what he’s worried about is preparing the way he knows how to prepare, taking care of his process and when you take care of your process, the results will come.

“Carter has a routine and on top of that, he has the talent.”

It goes back to before Hart arrived in the NHL bubble. He was in his own bubble.

The Flyers never trailed during the Eastern Conference round robin. They allowed just three goals over the three games, which is the fewest among all NHL teams at this point in both total and in average per game.

“Probably the difference is Carter Hart early on making those two breakaway saves, especially the one where we’re on the power play and we turn it over,” Flyers head coach Alain Vigneault said after the Tampa Bay victory. “Those were two huge saves. He probably had tougher saves to make in that first period than he did in the third. We bended a little bit. We didn’t break. A lot of it thanks to Carter. That’s an elite team. They pressed and came at us hard. We were able to do the job in the third.”

An hour after Game 6 of the 2017-18 WHL finals was over, Hart was still in uniform and padded up. He was the last one to leave the Everett locker room. In the days that followed, the Everett dressing room was gradually cleaned out — all except Hart’s locker.

“I looked up at that [Everett] jersey and it was hard to say goodbye, because I blamed myself after the [WHL game No. 6] loss,” Hart remembered. “I don’t ever want to go through that again. But it taught me something. I can only look forward. I have to look forward.

“The NHL, the NHL playoffs, the Stanley Cup, it doesn’t matter. I like to keep my mindset simple—and that’s stop pucks.”

“That will never change.”