Gritty does his best impression of Joe Exotic from 'Tiger King' 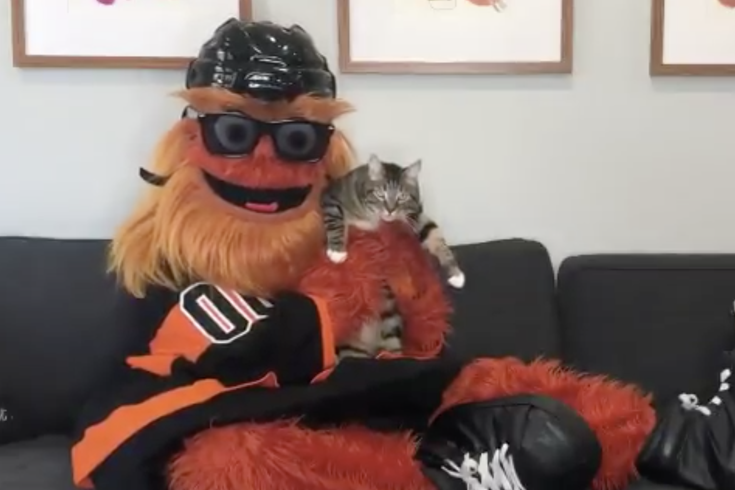 Philadelphia Flyers mascot Gritty does his best impression of Joe Exotic, the big cat breeder whose rise and fall is featured in the wildly popular Netflix docuseries 'Tiger King.'

Would anyone hesitate to call Joe Exotic an unsung hero of the quarantines that have kept people glued to Netflix during the coronavirus pandemic?

"Tiger King," the seven-part documentary series about the vengeful world of big cat breeders in the United States, has drawn millions of streams in the past few weeks and has proven to be one of Netflix's most binge-worthy selections in recent memory.

While the series features never-ending intrigue — murder-for-hire plots, unsolved mysteries, cults and tragedy — one of the documentary's most absurd details is the soundtrack of country music songs ambiguously sung by Joe Exotic himself.

Whether or not you're a fan of country music, these songs are actually very pleasing to hear in the context of "Tiger King." The cringe they elicit is one of awe and admiration at how something so corny can ring so sentimentally true.

"I Saw a Tiger," the best of the lot, has harmonies that make you want to cry about the beauty and plight of the species.

It's no surprise that Gritty, who has pledged to offer comic relief during these frightening times, decided to give us the Joe Exotic impression we needed.

I AM THE TIGER KING pic.twitter.com/SYT21bFMDv

Anyone who watches "Tiger King" inevitably suspects that there's no possible way Joe Exotic is a good singer. In one scene, he warbles off-key to his own song while driving in his car. It becomes clear that — like everything else in Joe Exotic's life — it's another form of unearned self-aggrandizement, his best and worst trait.

As Vanity Fair has since made clear, Joe Exotic is not the actual singer of all of these songs. He hired amateur country singers Vince Johnson and Danny Clinton to produce several songs that he claimed would be featured on a reality TV series that never came to fruition.

When Johnson and Clinton realized Joe Exotic was making music videos of himself lip-syncing to the songs, they were furious and called him out for it. Ultimately, they chose to simply roll with the train wreck that eventually became the Netflix docuseries, in which they both receive credit for the songs.

For years, Joe Exotic insisted to everyone he knew that he was the actual musician behind these songs. From Vanity Fair:

“It was absolutely ridiculous,” producer Rick Kirkham told Vanity Fair of Joe’s music ruse. Kirkham spent years living on Joe’s now-shuttered zoo, filming footage for a prospective reality show. “One time,” he said, “Joe got a little bit drunk and high, and we actually coaxed him into singing part of one of the songs. He couldn’t even hold a tune. It was just so ludicrous. It was a big joke within the crew and staff that it wasn’t him [singing in the videos]—but he was damned insistent to anyone and everyone, including us and my studio crew, that that was him.”

Joe Exotic currently is serving a 22-year prison sentence in connection with his murder-for-hire plot and wildlife offenses. The fame he desperately sought throughout his life finally hit its peak. When Gritty is imitating you, you know you've made it somewhere.