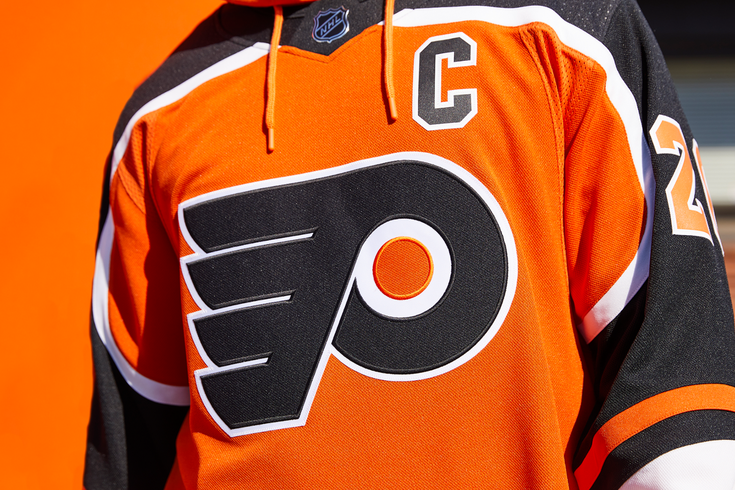 The Flyers' new threads feature a main body of orange coloring and the shoulders consisting of black coloring, with both sections separated by white pinstripes.

The Sixers will not be the only Philly sports team rocking new threads soon, as the Flyers unveiled their “Reverse Retro” alternate uniform on Monday for the upcoming season.

The new alternate jersey may look familiar to many Flyers fans, as it resembles the style uniform that the team had from 1982-2007.

The style features a solid color that goes across the shoulders and extends halfway down the sleeve, as well as another solid color that covers the main body of the uniform. A third color serves as the pinstripes of the jersey.

The new threads feature a main body of orange coloring and the shoulders consisting of black coloring, with both sections separated by white pinstripes.

When the franchise originally introduced this jersey in 1982, the Flyers wore orange-shouldered white jerseys for home games and white-shouldered orange jerseys for away games. Both uniforms featured black pinstripes and lower sleeves.

Fifteen years later, the organization created a third jersey that flipped the orange and black coloring from their road jerseys. The orange-colored road jerseys were eventually retired in 2001, while the white and black-colored versions of the uniform remained until 2007.

The new jersey, developed by Adidas, came about after an examination of the team’s main colors and jersey history to develop a never-before-seen uniform.

“Philly fans have clamored to bring back the burnt orange color associated with our teams of the 90’s,” said Mark Zarthar, who serves as the team’s senior vice president of marketing. “Those were special years for our franchise. The Reverse Retro jersey celebrates this era of Flyers history while simultaneously looking to a bright future, presenting a fresh look at a classic design.”

Like the legends who wore burnt orange & black before. Introducing the Flyers adidas #ReverseRetro jersey. Hitting the ice in 2021. pic.twitter.com/3qHRD5KKVZ

All 31 NHL teams will have an alternate retro jersey as part of their wardrobe for the upcoming season, which still does not have a determined start date.

While the new jerseys will not hit shelves until Dec. 1, they are available now for pre-sale here.