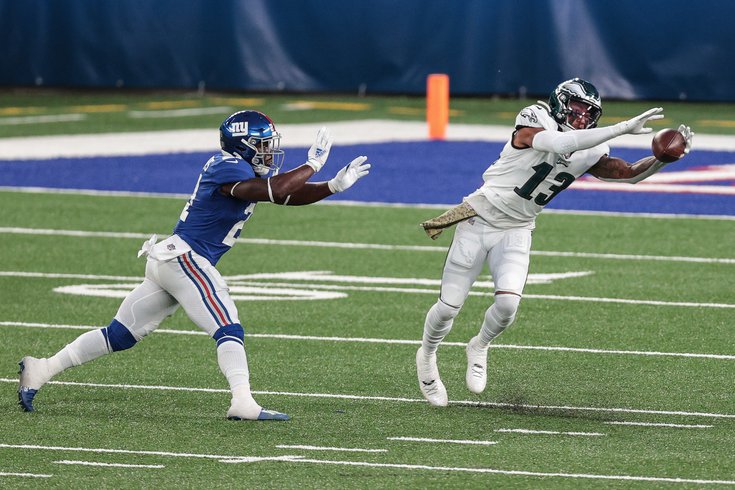 Travis Fulgham, a rare player that the Eagles can feel really good about this season, came off the field on the first drive in favor of Alshon Jeffery.

In their Week 10 embarrassing loss to the New York Giants, the Philadelphia Eagles played 67 snaps on offense, and 71 on defense. Let's just get right to the snap counts.

Analysis: Jalen Hurts, 2 carries, -1 yard. Miles Sanders did have 2 carries for 20 yards on zone read plays in which Hurts was in the game.

Putting Hurts in for 3 snaps mid-drive isn't enough at this stage of the season. Give him a series. Let's see what he's got.

Analysis: When the 21-day practice window was opened for Isaac Seumalo to begin practicing early in the week, it felt optimistic that he would would be ready in time to start at LG in this game. However, he was never activated to the 53-man roster, and remains on IR.

More surprisingly, Nate Herbig was unexpectedly sidelined with a finger injury, after he didn't appear with an official status (like questionable, doubtful, etc.) on the final injury report.

With Seumalo and Herbig both out, the Eagles were forced to start Sua Opeta at LG, and well, that didn't go well. The lineup of Peters-Opeta-Kelce-Pryor-Johnson marked the eighth starting five offensive line combination in nine games. Let's go ahead and update those:

If your aim is to have the best five players on the field, Opeta would not have been in there, and Jordan Mailata would. Of course, that would require Peters to move inside to guard, and we all saw at the end of training camp what can happen when you ask Peters to change positions.

Analysis: All three of the Eagles' running backs did good things. Sanders had 15 carries for 85 yards, Scott had an impressive 56-yard tip-toe down the sideline TD run, and Clement scored on a 5-yard run on his only offensive snap.

The run game was there, and yet, Doug Pederson only ran it with their backs 19 times vs. 39 dropbacks.

Analysis: On the third snap on the Eagles' first drive, Alshon Jeffery entered the game, and Travis Fulgham headed for the bench.

Fulgham is one of about a half dozen players (if that) who the Eagles can really feel good about this season, who has developed legitimate rapport with the struggling quarterback, and who was bursting with confidence after catching 29 passes for 435 yards and 4 TDs in his first five games, looking like a bona fide No. 1 receiver in the process. And you're going to sub him out on the third play of the game for a guy you've been trying to trade for over a year, and who almost certainly won't be with the team in 2021?

On that play, Jeffery ran into an open hole in the Giants' zone defense, and Wentz sailed a ball over his head. If you're Fulgham in that moment, I don't know how you can watch that unfold from the sideline and not think, "You have to be kidding me."

As you can see above, Fulgham played his share of snaps (88 percent of them, actually), and I can't say if he sat in favor of Jeffery at any other points during the game, but shoehorning Jeffery into the game on that first drive seemed silly. Why mess with the one true pleasant surprise from this season, in any way?

Fulgham ended with 1 catch on 5 targets for 8 yards. Jeffery was not targeted the rest of the day.

Analysis: In each of the last two seasons, it's been a common statement (self included here) to refer to Zach Ertz and Dallas Goedert as the best 1-2 TE combo in the NFL. That's been far from true in 2020. They've both been outplayed by a journeyman backup tight end.

Analysis: The Eagles' defensive line combined for three sacks, but this was their worst game of the season, as the Giants' bad offensive line pushed them around at times.

Analysis: Singleton and Edwards combined for 28 tackles, but I think it was pretty obvious that the linebackers did not play well as a group on Sunday, as usual. In a bit of a surprise, Singleton assumed three-down duties instead of Edwards.

Analysis: There were concerns about Maddox's ability to play outside corner in the NFL at 5'9, 184, and those concerns have materialized on the field. I respect Maddox's willingness to play wherever the team needs him, but he is not an ideal outside corner. He can perhaps be a good slot corner, or maybe even a free safety, but CB2 is going to be a significant need for the Eagles this offseason.