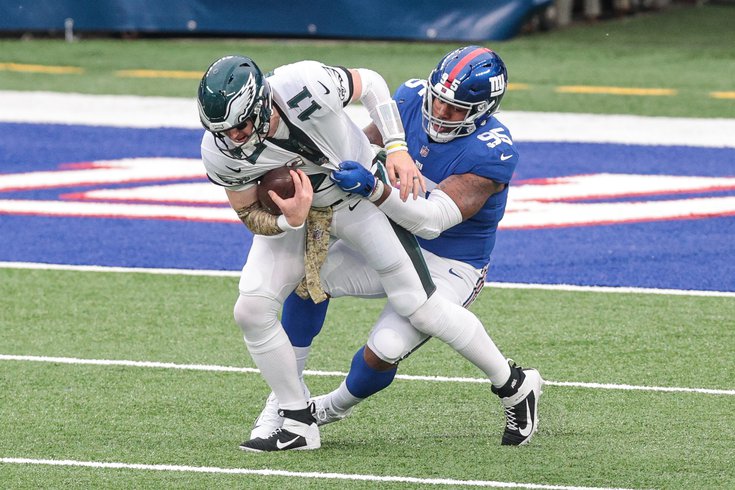 The Eagles made the absolute least of the extra time they had to prepare for the Giants, dropping their first post-bye game 27-17 to their NFC East rivals. Just about nothing went well for Philadelphia on Sunday, and it serves as a reminder of where this team is headed down the stretch. They should not be taken seriously in any form or fashion.

• Good things happen when the Eagles run the football with regularity. Doug Pederson has gone away from the run in occasionally baffling fashion this season, but with Miles Sanders back in the mix, it was up to the rushing attack to save the day for Philadelphia.

So of course it was Boston Scott, the "Giants killer" who went off against them last season, who really got things going for the Eagles in the second half. He made it to the endzone in somewhat dubious fashion — I personally thought he stepped out of bounds on the run — but it takes nothing away from the terrific run of 56 yards that got him there.

Sanders was so good on Sunday that he was actively erasing bad plays from other guys on the offense. In the third quarter with Jalen Hurts behind center, Sanders scooped a botched snap off of the turf and scampered for a painless first down. He made it look a lot easier than he had any right to, and maybe that's the sort of guy who should get the ball more.

This team, like any football team, is considerably more dangerous when they establish the run game and force teams to respect their fakes in the backfield. You would think it would be intuitive for a team that loves play-action to make an effort to get the ground game going. Unfortunately, they abandoned it right as it started to get going, but more on that soon.

• I don't have a whole lot of positive things to say about the defense, but Brandon Graham was competing his butt off out there, so we'll give him a bit of love. More than we can say about most of these guys this week.

• This was one of the most miserable defensive performances for the Eagles in recent memory when you consider the opponent. Daniel Jones had plenty of time to operate in the pocket, New York's receivers faced little resistance in the secondary, and the defensive line got absolutely gashed most of the day, and Wayne Gallman made plenty of people forget (at least for one afternoon) that Saquon Barkley was out injured. Very few positives to point to on defense.

If we assume the defensive line can be excused for one rough outing, and I think they've earned that leniency, our eyes have to drift to the secondary. Darius Slay has generally been a good addition to Philadelphia's defense, capable of shadowing top options on other teams, and even when he has played well it hasn't mattered too much because the rest of their corners are so bad. Nickell Robey-Coleman gets roasted constantly, Avonte Maddox is proving unable to fill a larger role, and when Jalen Mills has played corner reps this season, he hasn't exactly lit the world on fire.

(That being said, Slay was not good on Sunday either and has had a couple of clunkers already, so can't exactly give him a pass for such an inept performance against a bad team.)

It gets all the more painful when you see castoffs like former Eagles corner Sidney Jones coming up with turnovers for other teams, while NRC has an interception go through his hands and off of his facemask before falling harmlessly to the turf. they need a second legitimate corner badly, and given the cost of getting one on the open market, they almost have to draft one. Looking at this team's draft history, good luck.

I think it's fair to say the Eagles aren't really making anyone look better as a product of Jim Schwartz's scheme, which means Howie Roseman has more pressure to get things right. As we have seen, that's not exactly a recipe for success.

• What the heck was up with Jason Kelce on Sunday? One of Philadelphia's most consistent players had a bunch of issues snapping the ball, with both Philadelphia quarterbacks having to field low or off-angle snaps. It would make more sense if he was struggling to block because of the uncertainty around him, but snap issues are his to own.

• Make all the excuses you want for the performance of this offense. The line play was bad, they played out of a hole from the beginning, we've heard it all before. At this point, the coach and the QB have to be in the crosshairs. There is no excuse for this team to look as inept as they do for long periods of games.

On the coaching side, the team's complete lack of preparation for this game falls on Doug Pederson first and the rest of the coaching staff right after that. Through the first 30 minutes of football, there were maybe 2-3 guys who played well on the entire team. That's a tough thing to manage when all your guys had extra time off to rest, recuperate, and prepare for a matchup with a division rival. When even the strength of your team (the defensive line) looks completely inept for long stretches, you have failed as a team.

Then you have to consider the weird decisions Pederson keeps making within the flow of the game. The running game got going, so Pederson promptly decided they were going to let Wentz sling the ball and ignore the hot hand/best offensive player they had on Sunday. Why run the Jalen Hurts package with no real chance for him to ever throw the ball? What happened to the creative designs after their successful fourth-down conversion involving Jalen Reagor in the first half?

Philadelphia has a billion offensive coaches and no idea how to make use of them. That's what the tape says, anyway.

• I just want to put a separate bullet point in for this play — you abandon the run for a lot of the second half, and then you run a third-and-18 draw down four points in the fourth quarter? How the hell are they arriving at these decisions? If it's toxic groupthink, they need to purge the staff. If it's Pederson not being the guy we thought he was, that's just as bad, if not worse.

• Then you have the QB. This is a game where Wentz might escape some blame, but consider this for a second — on a pair of back-to-back plays in the third quarter, Daniel Jones threw two inch-perfect jump balls to Giants receivers on opposite sidelines, each guy coming down with big gainers to set up an eventual touchdown. The focus ends up being on the catches, which were good, but it's critical to note that Jones gave them chances to make plays in the first place.

Wentz didn't do that on Sunday. On his deep throws down the field, his guys never had real chances to come down with the ball, either because they were overthrown or because double coverage never afforded them a chance to make plays. It's one thing when Wentz has to outperform elite or even very good QBs and can't do so. Getting outplayed by Jones? That's a big problem.

Look, I thought Wentz was decent, even good at times on Sunday, and he cleaned up a lot of the issues that we normally scold him over. He got rid of the ball when necessary and his decision-making was good overall. After the Giants scored a far-too-easy touchdown early in the third, Wentz drove Philadelphia right back down the field, leading a great response.

But he is being paid to be one of the best players in football, not just one of the best quarterbacks. If he can't soundly and routinely outplay the Jones types of the league, very little else is going to matter. "Good stretches" are not good enough. This guy needs to make big-time plays and big-time throws all of the time. He cannot afford to throw behind or over guys in crunch time, even if these throws are only slightly off.

• The Jalen Hurts package was absolutely brutal on Sunday. Maybe they should attempt to let him throw the ball if they're going to try to get him involved because sledgehammering into the defensive front is clearly not working or fooling anyone.

• I said it during our first half observations, and I will say it again now: Philadelphia's roster management is absolutely nonsensical when you consider the sort of team they are.

Alshon Jeffery should only get snaps over Travis Fulgham if the latter is absolutely gassed or suffering from some sort of injury/illness. Instead, Fulgham faded in the gameplan for a lot of the afternoon, and when they needed him to come up big later in the game, he was not ready for the moment.

Jordan Mailata should not be pushed to the sideline so that Jason Peters can get extra snaps at tackle or in service of playing Matt Pryor and Sua Opeta. Instead, the Giants got pressure between the tackles against Philadelphia's unqualified interior linemen. At least Jeffery has a baseline of talent and some history of production for this team, the decisions on the offensive line have been absolutely ridiculous and got the bad results they deserved.

This is not a team with a real chance to compete for anything. They must be in development mode, and they must try to discover as much additional talent as they can. Build the chemistry between the young guys, get reps for as many of them as you can, and let the vets who aren't part of future success collect mothballs and paychecks on the sidelines.

• Nothing has been more infuriating this season than watching Pederson toggle through fourth down and two-point decisions like a drunk guy at a blackjack table. Going for two to get within a field goal after their first touchdown? Awesome, absolutely on board with that. Going for two when you're down four points in the third quarter, instead of just kicking the extra point to get within a field goal? No thanks, man.

Pederson will likely get asked about it after the game and dismiss any questions with some form of, "We just wanted to be aggressive" or some such answer. Aggression doesn't mean doing stupid stuff.

• This is an undisciplined football team, but even by their standards, this was a pitiful performance. Double-digits in penalties coming out of a bye is horrific.