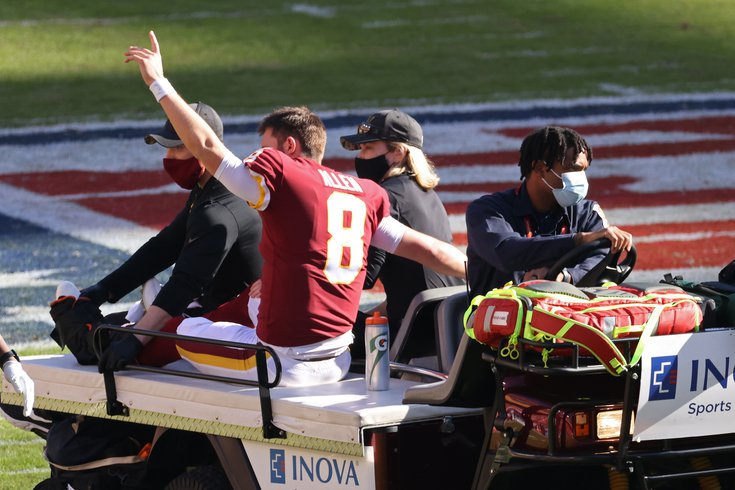 The Football Team lost a game and their starting QB last Sunday.

The Philadelphia Eagles are not a good football team. Fortunately for them, neither are any of the other teams in the NFC East, as the Birds are currently leading the division at 3-4-1.

And so, we'll continue on plotting the ideal outcomes for other games around the league as if the Eagles have a chance to contend this season, even though, again, they aren't good. Perhaps as the season goes along the lightbulb will go on and they'll look better? That's unlikely, but possible.

Whether they become better or not, it's pretty much 4 seed or bust, so for the other NFC games around the league, it's really all about who Eagles fans should be rooting for to get the 5 seed, which would be the Eagles' first-round opponent.

Anyway, ideal winners for Sunday's slate of games are bolded below, and you can get the latest lines for all the Week 10 games over at TheLines.com.

• Football Team at Lions: Last Sunday the Football Team lost a game in the standings as well as starting quarterback Kyle Allen. Still, they're only 1.5 games back at 2-6 (lol), so it's best if they continue to dig themselves into a deeper hole.

• Jaguars at Packers: Should the Packers earn the 1 seed, I would view them as a better matchup for the Eagles to have to get through at some point in the playoffs than the Seahawks. Plus, the Jaguars will be shopping for a new quarterback this offseason, so the more games they lose the better, thus keeping the Football Team (or maybe even the Giants?) from landing a blue chip quarterback prospect.

• Buccaneers at Panthers: While I believe there are better offenses in the NFC, Tom Brady gets the ball out quickly, which would help negate the Eagles' pass rush, which is the best thing they have going for them. They would be a bad first round matchup. It's hard to say whether it's better if they just win the NFC South outright, or if rooting for them not to make the playoffs at all is possible. Here, we'll just call it a game of interest, but we won't pick an ideal winner.

• Texans at Browns: It doesn't matter who wins this game, but the Eagles play in Cleveland next week, so it's worth keeping an eye on.

• Bills at Cardinals: Should the Cardinals become the 5 seed, I think the Eagles would have a fighting chance against them, given the records of neophyte quarterbacks in the playoffs, and the fact that it would be a warm weather team playing in 20 degree weather. Still, it's better if the Seahawks just win that division. I don't want to cover another Eagles-Seahawks first round playoff game.

• Seahawks at Rams: The Seahawks winning the NFC West and landing as the 2 or 3 seed in the NFC is probably the best outcome, because an Eagles-Seahawks first round matchup would be (a) bad for the Eagles, and (b) boring.

• 49ers at Saints: Yes, the Saints own the Eagles, but maybe not in Philly in a bad weather game? It's maybe better if the Bucs win the NFC South?

• Vikings at Bears (MNF): The Eagles might actually be better than this Bears team. They would be the best matchup possible.

Note: The Cowboys have their bye this week.