Eagles mailbag: Would an All-NFC East team be good? 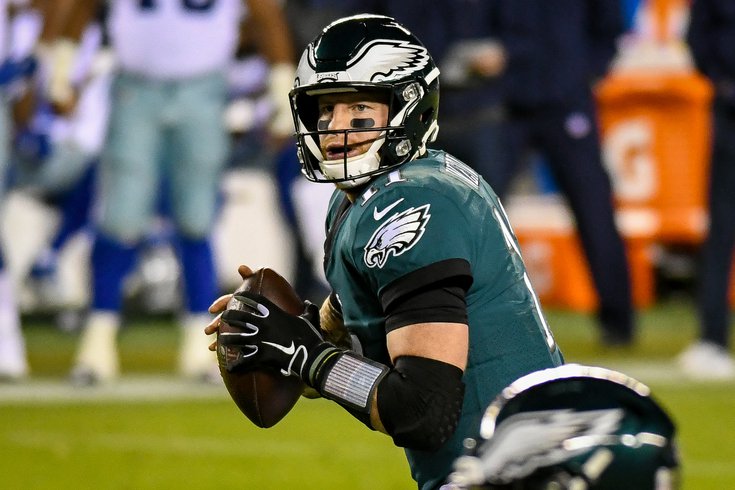 To note, we had so much overflow of good questions that we had two mailbags (one on Friday, and one today).

Question from RKotite: If you could make an all star team out the NFC East, combining all four teams based on currently available players (no Dak because he’s on IR, for example), what record do they finish with? Bonus points if you want to name offensive and defensive starters.

You can't answer that question without naming the starters! So here goes:

• QB Carson Wentz Eagles: The only other option here would be Daniel Jones, who has had a better season so far (low bar), but if I have Super Bowl aspirations here, I'm just hoping that Wentz turns it around later in the season.

• RB Miles Sanders, Eagles: There are durability concerns, but Sanders is explosive and averaging over 6 yards per carry. Zeke looks cooked.

• WR Terry McLaurin, Football Team: If I had my choice of any receiver in the NFC East, I'm taking McLaurin.

• WR Amari Cooper, Cowboys: He's been quiet, and yet is still on pace for 1164 receiving yards.

• TE Dallas Goedert, Eagles: Clearly the best available tight end in the division, and probably my choice even if Zach Ertz were healthy.

• LT Jason Peters, Eagles: I can't believe this, but JP is probably the best available option at LT. 🤯

• LG Brandon Scherff, Football Team: Technically, Scherff is a RG, but since Isaac Seumalo is technically still on IR, we'll just stick Scherff at LG. He'll be fine there.

• C Jason Kelce, Eagles: The Eagles' offensive line somehow hasn't been a complete disaster despite missing four-plus starters at times this season, and Kelce is a big reason why.

• RT Lane Johnson, Eagles: Even with the gimpy ankle, I'll take him over any of the other RTs in the division.

• DT Fletcher Cox, Eagles: No longer elite, but still the best DT in the NFC East.

• DE Chase Young, Football Team: This was a tough call for me between Young and DeMarcus Lawrence. I'll take the potential upside of Young tearing it up in the second half of the season.

• LB Blake Martinez, Giants: I didn't like this free agent acquisition for the Giants this offseason, but he's been good.

• LB Leighton Vander Esch, Cowboys: LVE hasn't played well this season, but like Wentz above, the hope would be that he turns it on in the back half of the season.

• CB Darius Slay, Eagles: He has made a huge difference in the Eagles' defense this season, as No. 1 receiver killed the Birds in 2019. Not so much this year.

• Slot CB: Kendall Fuller, Football Team: Fuller is a starting corner, but he would be sort of my do-everything guy.

• S Rodney McLeod, Eagles: Strong bounce-back season after a down 2019. With three really good corners, I just need McLeod to be the leader on the back end.

That would be a very good team, and a Super Bowl contender, but with a major concern at quarterback, whether you have Wentz or Jones. If you did this exercise with any other division, you'd have the following quarterbacks:

The All Available NFC East team would get smoked by any other division, obviously.

Question from Power Sturge: What odds would you give to the Eagles drafting a linebacker in the first two rounds in the next draft?

Low. I don't think you'll ever see them draft one in the first round under this regime. Maybe in Round 2. You're going to see a lot of draft nerds predicting a LB to the Eagles in the first round leading up to the draft, but if you're hoping the team is going to change its mind about how it prioritizes the linebacker position, forget it.

Question from Stop whining and concede Donny: Please tell me that when Nate Gerry comes back, he doesn't jump back into the starting role.

I'm curious to see how T.J. Edwards plays this Sunday. I think he has an opportunity to become the new three-down backer.

Question from Bird Gang: Given the cap situation next year, how likely is it that Jalen Mills comes back?

Mills' cap number this year is $4,000,000. There's perhaps an argument that he's more likely to return at a similar number because of the Eagles' challenging cap situation next offseason. But also, assuming Jim Schwartz isn't going anywhere, we all know Mills will be back, right?

Question from pee: Imagine if McNabb played as poorly as Wentz has during this year, he would have been sent packing. The amount to leeway Wentz has been given by the press is incredible.

🙄. Has Wentz not been unanimously criticized by "the press?" He certainly has here. I'll admit I don't read everything, but who exactly is giving him "leeway?" What am I missing?

Anyway, McNabb definitely got his share of criticism at times during his career when he went through rough patches. But he also had stretches when it was deserved. Take the first four games of his fifth season, for example, as something close to an apple-to-apples comparison.

So we don't have to imagine. McNabb did play as poorly at times as Wentz is playing right now.

I think you have to start that process four years in advance. Begin questioning the validity of possible losses during the 2024 season right now. Like, even when you win games in 2020, say that you should have won by 50 instead of by whatever small margin of victory you did win by, creating doubt with pee-brained dolts who will believe anything you say, no matter how outrageous.

Or don't even play football. Whatever. Just go golfing instead, and occasionally take 20 seconds out of your day to reassure your fans that you're killing it. When major problems arise, ignore them. Like if you lose half your team to some weird injury, for example... No biggie! Just golf right through it, and tell your fans the problem will magically go away. They'll believe.

Meanwhile, install a spineless commissioner and rules committee that will do your bidding, win the rights to the 2024 Super Bowl being played in your house (proud fans of your team with guns encouraged), and endlessly make up lies about the other 31 teams in the league. The more ridiculous the accusations, the better. Hell, demand that they be put in jail, if necessary.

Nobody will take you seriously initially, but the longer you stick to the plan, the more the rules committee will reconcile with your pure evilness at the expense of the integrity of the game, as long as they stand to benefit in some way. Boom. Championship.