Week 10 NFL picks: Rounding up the experts' predictions for Eagles vs. Giants 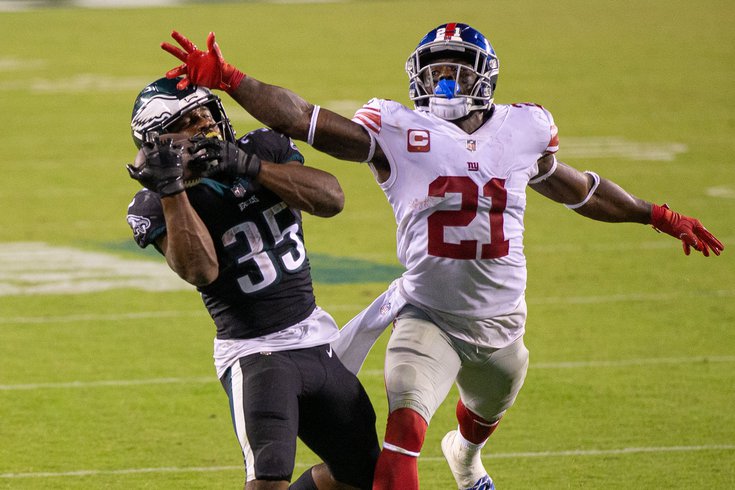 The Eagles are in the 20's across the board.

The Eagles are coming off a bye, have won two straight games — including one against their opponent this Sunday — and are as healthy as they've been all season. Yet, people seem to have less confidence in them than they did prior to their last two wins.

Against both the Giants and Cowboys, the Eagles were heavy favorites. But after seeing how the Birds played in those two games, needing to come from behind to avoid being upset at home, oddsmakers have likely decided this Eagles team shouldn't be giving a touchdown or more to any team in the NFL. That, coupled with the fact that the Birds will hit the road for the first time in a month, has led to Philly being just a 3-point favorite against the 2-7 Giants on Sunday, according to TheLines.com.

And it's not just oddsmakers. Even those who make predictions every week appear to have lost some faith in the Eagles. Two weeks ago, when we rounded up picks for the Eagles game against the Cowboys, we found 83 writers and NFL experts and not a single one was picking Dallas to win. This week, there's still an overwhelming amount of Eagles support, but it's not nearly as one-sided as a week ago.

Why? We'll let the writers explain themselves.

We've already broken down some matchups to watch and offered up predictions of our own — as well as picks for every game this week. Now, as we do every week, let's take a look at how the local and national media sees this game playing out, and why some believe the Birds will fall to 3-5-1 on the season and 2-2- against the dismal NFC East...

• PhillyVoice staff: After everyone was in agreement last time around, we're back to being divided in out picks this week, with six of us taking the Eagles and one taking the Giants. Here's how Evan Macy, who has the largest point differential of the group at 14, sees this one playing out:

It’s rare that two NFL teams play twice three weeks, but the Giants will have another crack at the Eagles and will no doubt have revenge on their minds, as the Eagles fought back to win a game that really should have been put away. Returns of injured players will be key here, as the Eagles offense could look completely different than it did back in Week 7. And in my opinion, that is the Eagles’ edge. Alshon Jeffery is an upgrade, even if he is a shadow of his former self. Miles Sanders is the team’s biggest weapon with the ball and he should be back. Dallas Goedert wasn’t in there for the first game, and the offensive line could actually have three starters active if all goes well. The Eagles should post some points this week. Daniel Jones will turn it over. The Eagles will get to .500.

• Inquirer.com: All four of their writers have the Eagles winning, but only one has them winning by more than a touchdown. Here's what Les Bowen, who sees a narrow win for the Eagles, had to say...

The Giants' last five games have been decided by a total of 10 points, including their one-point loss to the Eagles on Oct. 22 at the Linc. So do I like the Eagles, giving 3.5 points? No, I do not. I want to see all these shiny refurbished parts actually fit together, as the injury list diminishes.

The Giants weren’t able to do much offensively in the last meeting, except sneak their quarterback around right end for 80 yards. I think Daniel Jones might fare better this time; New York’s offensive line has improved steadily. The Giants' biggest offensive problem is their turnover-prone quarterback, which is something they share with the Eagles.

I think Joe Judge’s team has improved steadily since its 0-5 start. I don’t feel the same way about the Eagles. Every victory this season has been won by clawing and scratching and shaking off terrible, stupid mistakes; if everything suddenly falls into place this week, because a couple of rusty regulars return, I will be amazed. Oh, and Doug Pederson is 1-3 coming out of the bye.

• NJ.com staff: Just three of their five writers are picking the Eagles in this one. Here's more from Giants beat writer Zack Rosenblatt...

The Eagles have won 12 of the last 13 games in this matchup, including eight in a row, and six of those were by less than 10 points. This is one hump the Giants have just not been able to get over, despite leading in most of those games. The Giants have played their best football the last few weeks, Jason Garrett is finally showing a modicum of creativity, the offensive line is improving and the defense has been shockingly effective all season ... but the Eagles are more talented, and will have some key players — Miles Sanders, Jalen Reagor, Alshon Jeffery, Dallas Goedert, Isaac Seumalo — that didn’t play last time. On the “bright” side, more Sanders means less of Boston “Giants Killer” Scott. The Giants certainly can win this game, but are they talented enough to close it out?

• Bleeding Green Nation staff: In arguably the biggest surprise of the day, BGN is not united in picking the Eagles. And, perhaps even more surprising is that it's editor Brandon Gowton picking the Giants in an upset.

• ESPN staff: Eight of their 10 NFL experts are picking the Eagles over the Giants.

The Eagles have played one game since beating the Giants. A rematch so soon should favor the better-coached team, but which team is that? The Eagles are far more talented with Lane Johnson and Miles Sanders on track to return and a stout defensive line well-suited to stop the Giants' steadily improving power run game.

• CBS Sports staff: Seven of their eight prognosticators are picking the Birds, including Pete Prisco, who sees a 23-16 win for Philly.

This is for first place in the division. That's hard to believe. The Giants almost beat the Eagles in Philly a few weeks back, but this Eagles team is much healthier. That matters. Look for the Eagles to win a tough, physical game.

Would I be surprised that Brett Favre said what he said about Carson Wentz to light a little fire under Wentz, as a favor to Doug Pederson? No, not at all.

I like the way the Giants have been playing in recent weeks, but I think over the second half of the season we’re going to see the Eagles get some separation in the NFC East.

• USA TODAY Sports staff: Six of their seven writers are picking the Eagles over the Giants.

• SB Nation staff: It's a more even split at SB Nation, with just six of their 10 NFL experts taking the Birds.

The Philadelphia Eagles are finally getting healthy, while the New York Giants can't beat anybody but the Washington Football Team. Those dynamics have the majority of our predictors risking a field goal plus a scary hook with an Eagles squad coming off its bye.

"At this point, your guess is as good as ours when it comes to the NFC Least and how it's going to play out this season," Sobleski admitted. "With that said, the Eagles still hold an advantage within the division. Plus, Philly is coming off its bye with a few expected returns to the lineup, particularly along the offensive line where guard Isaac Seumalo had been cleared by doctors this week and right tackle Lane Johnson had some time to heal."

But that's not all. Veteran receiver Alshon Jeffery (foot) is practicing fully for the first time all season, top back Miles Sanders (knee) has returned to practice on a limited basis, and defensive tackle Malik Jackson (quad) might have a chance to avoid a missed start as a result of the bye week.

Still, we're far from unanimous here, with Gagnon noting the Giants are pretty healthy too and have hung around of late. Each of their last five games has been decided by three or fewer points, and, for what it's worth, Eagles head coach Doug Pederson is just 1-3 coming off bye weeks.

Don't go overboard on anything associated with the NFC East right now.

• Sheil Kapadia, The Athletic: Each week, former Eagles beat writer Sheil Kapadia (now a national football writer for The Athletic) makes picks against the spread for every game. This week, he's taking the Giants to cover the 3.5-point spread, but he's picking the Birds to win the game, 23-21.

Nothing would surprise me with the Eagles in this game. Carson Wentz is expected to have his best supporting cast of the season: Travis Fulgham, Jalen Reagor, Dallas Goedert and Miles Sanders. The offensive line is healthier too. It’s possible that the coaching staff figured some things out during the bye, Wentz looks comfortable and the Eagles deliver their best offensive showing of the season. It’s also possible that the coaching staff didn’t figure anything out, Wentz turns the ball over more, and the Eagles’ season hits what feels like rock bottom. These teams played a few weeks ago, and the Eagles needed a late rally for a one-point win. It feels like another close one.

The Eagles had a bye week to prepare for the rematch with the Giants, and Carson Wentz had 359 passing yards in the first meeting. New York kept the first meeting close and have improved in the running game, but Philadelphia increases its lead in a weak division with a season sweep.

The Eagles are coming off a bye. The Giants are coming off a much-needed close win in Washington. They won't be playing another one-point affair with Philadelphia getting healthier everywhere and New York facing a strong pass rush for Daniel Jones. The Eagles will be close to full juice with their offensive line and their skill players around Carson Wentz.