A look at the Eagles' NFL-leading 32 sacks allowed, with gifs and stuff 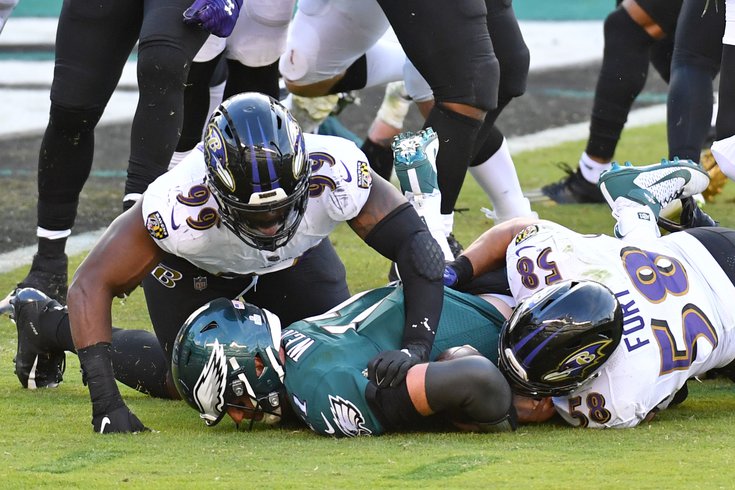 At the halfway point in the 2020 NFL season, the Philadelphia Eagles have allowed 32 sacks, which leads the NFL and puts them on pace for an absurd 64 sacks allowed.

The last team to allow at least 64 sacks in a season was the Cleveland Browns, who allowed 66 sacks in 2016. They went 1-15 that season. The following is a list of teams that have allowed at least 25 sacks this season, and their win-loss records:

The combined records of the teams above is 12-45-2 (.220). Take out the games in which two of the teams above played each other, and it's 4-37 (.098). My conclusion? There's a strong correlation to between giving up a lot of sacks and losing football games. #Analysis.

In the Eagles' case, what's to blame? For this exercise, we looked at all 32 of the Eagles' sacks, and tried to determine what went wrong on each sack. Our findings:

For the purpose of showing one's work, here's video of each sack, with an explanation of what we saw on each sack thereafter:

Sack 1: Football Team safety Troy Apke comes down from his safety spot and blitzes to the outside. Rookie Jack Driscoll abandons his responsibility in Ryan Kerrigan to pick up Apke, and Kerrigan has a free run at Wentz. Meanwhile, Apke is double-teamed by Driscoll and Boston Scott. Wentz makes the sack worse by retreating further back into the pocket, but this one is on Driscoll.

Sack 2: On the very next play, Kerrigan isn't sold that Dallas Goedert is actually trying to block him, and he quickly realizes a screen is coming. With nowhere to throw it, Wentz tucks the ball and tries to run it, but Matt Ioannidis brings him down for a loss of 2. If you'll recall, Wentz was concussed on a similar play in the playoffs last year against the Seahawks. If the screen isn't there, just chuck it into the dirt like almost every other quarterback in the NFL. That's on Wentz.

Sack 3: Corey Clement chips Chase Young on the edge, and it's actually too effective, as he propels Young into an unplanned-but-nasty spin move to the inside, and Jason Peters is left blocking the air. Still, Peters shouldn't be getting beaten inside when he knows he has chip help from the running back on the outside. That’s on JP. Wentz makes the situation worse by trying to make a play that isn’t there, and fumbling.

Sack 4: It's Richard Rodgers' job here to get enough of Montez Sweat to force his pass rush inside so Wentz can get out on a naked bootleg to the right. However, Sweat owns Rodgers at the point of contact, and he is able to cut off the boot action. Wentz tries a pump fake to get Sweat in the air, but Sweat isn't buying it. A throwaway here is easier said than done. This one is on Rodgers.

Sack 6: It's 4th and 4, and the Football Team is sending Jon Bostic on a blitz up the middle. Doug Pederson placed blame on Boston Scott for not identifying the blitzing linebacker, and blocking him.

Sack 7: In order to sell play action, the Eagles are having Isaac Seumalo pull across the formation, and he is tasked with blocking Ryan Kerrigan. Kerrigan isn’t fooled, and Seumalo doesn’t really have much of a chance of blocking him. Clement doesn’t offer much help. Easy to blame Seumalo here, but I’ll put this one on scheme. Unwilling to concede the sack, Wentz holds the ball carelessly as he goes down.

Sack 9: Nothing is open in the end zone, and Wentz takes a sack after having almost 5 seconds to throw. This was third down, so there was no difference between a sack and a throwaway. We’ll call this one a coverage sack.

Sack 12: Slow-developing pass rush by the Niners gets home, as DT D.J. Jones eventually finds his way to Wentz, unblocked, as he loops around the left side. This was a 2nd and 27 play with slow-developing routes down the field, and nobody got open. We’ll ding Driscoll for not coming off his double-team and blocking Jones.

Sack 13: 3rd and 8, Eagles go empty set. Niners are blitzing their slot CB off the edge, so the ball has to come out quickly. It doesn’t, and in this case, he had options to throw to. We’ll go half Wentz, half Herbig for slow recognition of the looping DE inside.

Sack 14: 3rd and 9. Sack is essentially the same as an incomplete pass, so we won’t ding Wentz for not throwing this away. Jordan Mailata doesn’t block anyone, and Jason Kelce’s guy eventually finds his way to Wentz, but if something were open, the ball would have come out already. Coverage sack.

Sack 15: Ertz, Hightower, and Fulgham all eventually get some separation in their routes, so this isn’t a coverage sack. It’s either on Wentz for not getting the ball out, or on Mailata, for getting bull-rushed deep into the pocket by Bud Dupree. If Wentz tries to throw this under heavy duress, and a Steelers pass rusher gets the ball out, we’re killing him for that. I think this one is on Mailata, for forcing Wentz to flee the pocket.

Sack 16: 2nd and 12. Wentz’s first look is a throw to the flat to Miles Sanders, and it’s there. He doesn't take it, and it might’ve gotten 5 or more yards, depending on whether Sanders could’ve broken a tackle or not. Instead, he resets, and eventually goes down. A potential 3rd and 7 (or maybe better) becomes 3rd and 17. Wentz.

Sack 17: A blitzing DB runs right by Clement as the Eagles are running play action. We’ll put this one on Clement, as he probably should have seen the blitz coming. (It looks worse from the “All-22” angle.)

Sack 18: The Eagles are running a stop-and-go to Fulgham, and it’s there before the pressure gets to Wentz (as shown in the All-22 look). Throw it!

Sack 19: Mailata beaten around the edge.

Sack 21: Greg Ward is definitely either No. 1 or No. 2 in the progression here, and while not wide open, he at least had a chance (as shown in the all-22 look). Wentz either didn’t like it or didn’t see it and instead took the sack on 3rd down. This is of course the play in which Jamon Brown sacked Wentz, but this one is on Wentz.

Sack 22: The Ravens take advantage of Jamon Brown by sending a blitz his way. Brown lets Campbell go to try to pick up the blitzing LB, even though Jason Kelce isn’t really blocking Campbell, and both defenders come free, with Campbell getting home first. This is what happens when you have no continuity, and you’re on your fourth RG of the season. We’ll give it to Brown.

Sack 23: Brown gets thrown out the club.

Sack 24: Brown is beaten by Campbell again, but Campbell doesn’t get home. On the opposite side of the line, Patrick Queen (48) is playing a little game of peekaboo with Mailata, pretending to blitz to occupy Mailata so that the blitzer on the edge gets a free run. I can’t ding Mailata here, because I simply don’t know what the Eagles want him to do there. My sense is that they want him to be sure the inside guy (48) is accounted for. We’ll be kind and call it a scheme sack.

Sack 25: Brett Toth can’t get to the corner blitz.

Sack 26: Wentz runs around for a while before he’s sacked. It’s 3rd and 9, so he’s trying to keep the play alive, but even on 3rd down there are times you just throw it away. Being this deep in your own is one of them. But also, he had open receivers.

Sack 27: Loss of 0. Meh. Nobody clearly open down the field, no lineman beaten. We’ll call it a coverage sack.

Sack 28: Mailata beaten around the edge.

Sack 29: Mailata whiffs badly on the inside move by DeMarcus Lawrence.

Sack 30: This is just a totally unacceptable play by Wentz. He had almost eight seconds to throw, but worse, he was out of the pocket and could have easily thrown it away, and it’s not as if he couldn’t have seen the defender coming. Careless football. Careless turnover. These are the types of plays that cost games, but Wentz was lucky Brandon Graham bailed him out with a strip sack on the Cowboys’ ensuing possession.

Sack 31: There’s a lot going on here, but I’ve landed on Matt Pryor mistakenly blocking 99 instead of 55, though you kind of can’t fault him for blocking 99. Jason Kelce seems to recognize it and probably would have gotten to 99 in time, but Pryor did not. Tough one to give to Pryor, so we won’t. We’ll call this one a scheme sack.

Sack 32: Eagles are up 14, and just trying to run clock. The Eagles call a play that allows Wentz to hit a wide open receiver if it’s wide open or just go down to keep the clock running if it’s not there. Aldon Smith picks up a garbage sack.