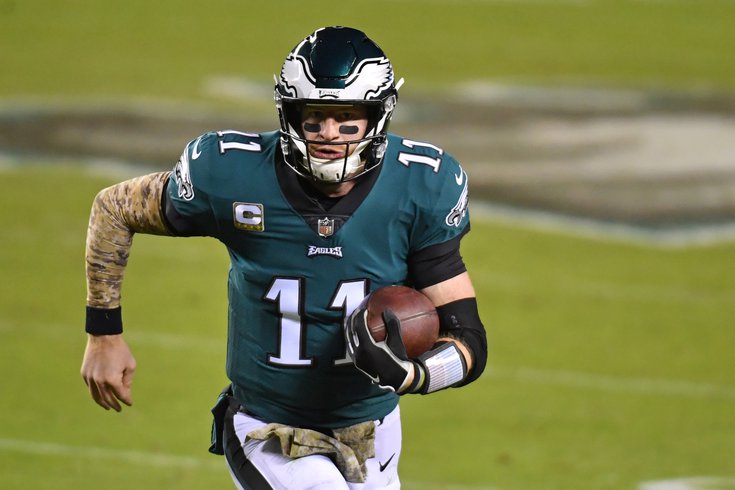 Here's where people around the country have the Eagles ranked after they rested Week 9. Oh, and here's our version of these sellout rankings, too.

They're the best team in the worst division in football. Barring an implosion, Philadelphia should make the playoffs for a fourth straight season. Coming into 2020, the bar for a successful season was getting Carson Wentz his first playoff victory. While that is still possible, the injuries, roster imperfections and unexpected struggles by Wentz make that more of a long shot at this point.

#JimmySays: If the Eagles get just two more wins this season, it would force one of the other teams in the division to have to play at least .500 ball the rest of the way, which feels like a major stretch, sadly. That would make them winners of the NFC East at 5-10-1. I think I'm rooting for that.

Last week, Doug Pederson fielded questions as to whether he considered putting Carson Wentz on the bench during Philly's ugly win over the Cowboys on Sunday Night Football. The coach said he had "a lot of trust and faith" in his QB1, which you believe -- but you also have to wonder if that trust and faith has been shaken in a way Pederson would have never imagined in August. Wentz has been making punishing mistakes since Week 1, and his turnovers against a terrible Dallas defense made you think maybe Ben DiNucci was somehow playing for both teams. The numbers are grim: Wentz reached the Eagles' Week 9 bye leading the league in turnovers (16), interceptions (12) and sacks (32). He hasn't been accurate or explosive. In most years, his play would've ruined Philly's season. Instead, they're in first place in the NFC East. 2020, man.

#JimmySays: Lost in the fact that Wentz leads the NFL in turnovers is that he has also taken the most sacks, as noted here, and many of them have been of the "QB's fault" variety. We'll actually have more on that later this week (maybe Wednesday).

The Eagles are now pretty big favorites to win one of the worst divisions we’ve ever seen. But they should get some of their injured players back, and could still be dangerous come playoff time, no matter how embarrassing their three NFC East rivals may look by then.

#JimmySays: Jalen Reagor and Dallas Goedert are both back, and the Eagles should also soon be getting Lane Johnson, Isaac Seumalo, Miles Sanders, and eventually Zach Ertz. They will all indeed help. #Analysis.

Sunday's date with the Giants might be NFC's most consequential game, in terms of playoff ramifications, on the Week 10 schedule. No, seriously.

#JimmySays: Meh. Seahawks-Rams and 49ers-Saints feel more compelling to me.

For a first-place team, the Philadelphia Eagles have quite a few problems.

Injuries have wrecked them on both sides of the ball. But according to Daniel Gallen of Penn Live, perhaps their biggest issue is the poor play of quarterback Carson Wentz.

"Among qualifying quarterbacks. Wentz ranks 32nd in completion percentage (58.4%), 24th in touchdown percentage (3.9%), first in interceptions (12), 30th in yards per attempt (6.2), first in sacks (32), second in fumbles (seven) and 30th in passer rating (73.2). He turned the ball over four times (in Week 8) against the Cowboys, and the defense bailed him out after three of those. The Eagles need to hope that Wentz can turn things around in the second half."

The schedule doesn't do the Eagles any favors after the bye, either. After traveling to New York to face the Giants in Week 10, Philly faces five straight against teams with winning records: at Cleveland, vs. Seattle, at Green Bay, vs. New Orleans and at Arizona.

If they survive that gauntlet, the Eagles will more than likely make the playoffs.

#JimmySays: I think what that stretch of games shows is that the Eagles really, really need to win Week 10 against the Giants, because on paper, that looks like five losses thereafter.

Next up, the Eagles play at a feisty Giants team. Don’t forget, the Giants should have beat the Eagles earlier this season, New York just blew it in the final minutes. It would be very 2020 NFC East to see the Giants win that game and tighten up the divisional race.

#JimmySays: For sure, the Giants are better than their record would indicate. And sure, I think feisty is maybe a good way to describe them. They do compete.

They come off their bye in first place and getting healthier. They are the clear favorites in the NFC East now.

#JimmySays: Yes, thank you for that, CBS.