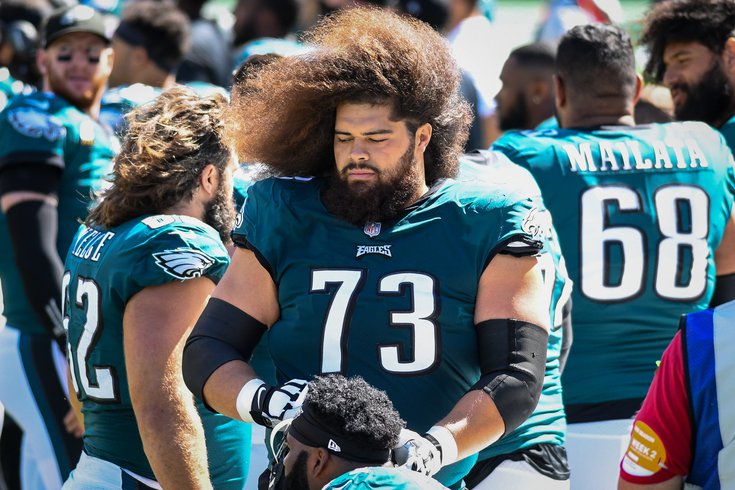 Isaac Seumalo by the bench during the Philadelphia Eagles game against the LA Rams at Lincoln Financial Field in Philadelphia on September 20, 2020.

The Philadelphia Eagles announced on Monday that they activated the 21-day practice window for starting LG Isaac Seumalo, in advance of his possible return from injured reserve.

Seumalo injured his knee during the second quarter of the Eagles' matchup against the Rams, and he has been out since. In Seumalo's absence, the Eagles have had to juggle their offensive line to a severe degree, starting seven different offensive line combinations in eight games.

As a recap, here they are:

The return of Seumalo, whenever that occurs, should result in an upgrade at two spots along the Eagles' offensive line. Seumalo will be an upgrade over Nate Herbig, and whoever fills in at RG — whether that be Jason Peters or Herbig — should be an upgrade over Matt Pryor.

To be determined if Seumalo will be ready to go this Sunday against the Giants. If so, the other question to consider along the offensive line will be whether Lane Johnson and/or Jack Driscoll are ready to return from their injuries to play RT.

If not, Jordan Mailata will likely start at RT again, like he did last week against Dallas, with Peters staying at LT. If Johnson or Driscoll are good to go, the Eagles will have to decide whether Peters or Mailata will start at LT. The feeling here is that Mailata should get the nod with Peters playing RG, but bet is that the team will opt for Peters at LT, Herbig at RG, and Mailata coming off the bench.