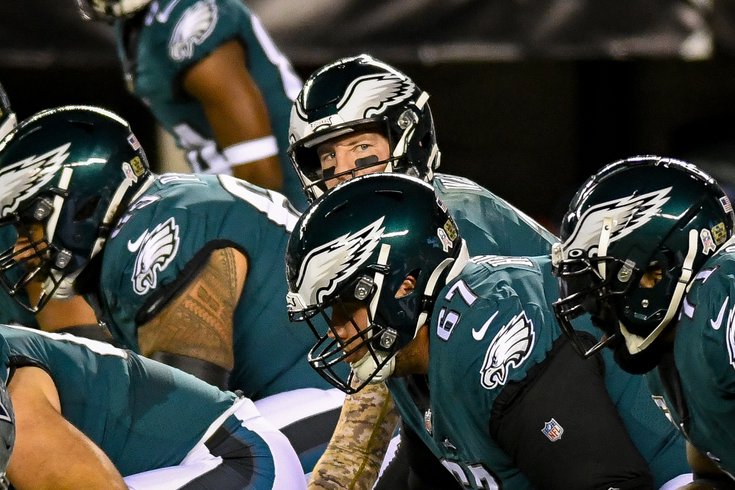 The Eagles are relaxing this week, hoping to get healthier and perhaps more in sync when they return to play the Giants in Week 10 as they remain NFC East leaders and favorites.

But it hasn't been pretty. The Eagles' 3-4-1 record is nothing for the team to be proud of, and a likely division-winning 7-8-1 record (or worse) is hardly a promising sign that this team will contend once it makes the playoffs.

Still, they are about to play a ton of meaningful football games, both in terms of the playoff race and for, you know, those of us who like to put a little money on things. And so, let's take a look at the latest future odds and player props from TheLines.com, from postseason chances to award winners and season stats as the Eagles look to return with a better roster in Week 10.

Really all you need to know for this section is that the NFC East is a combined 8-22-1, and they've been out-scored this season by 186 total points.

After starting the season just behind Dallas for the best odds to win the division, a very slow start saw them plummet to pretty long odds at the end of September, but the Eagles appear to be firmly in control now. According to TheLines.com, DraftKings has them at -275, the best they've been all season long. Hope you got your money in when the payoff was better.

There is a chance the Giants or Washington (they are playing each other), or even Dallas makes some headway in the division race with the Birds on the bye, but even a win puts them a half game behind Philadelphia.

At the beginning of the year, we had Carson Wentz's MVP odds listed here and it was a reasonable expectation that he would at least stay in the race for a large part of the regular season. His odds have plummeted every single game, but somehow, surprisingly as players names have been taken off the board at TheLines.com left and right, Wentz remains with extremely long +15000 odds. I wouldn't bet it, but you never know...

We also previously looked at Jalen Reagor's odds for Offensive Rookie of the Year, which opened at +2800 according to TheLines.com. But the Eagles placed him on IR on a few weeks ago after he injured his thumb against the Rams back in Week 2. He's returned and scored a touchdown against the Cowboys but will not be a factor for the award.

Miles Sanders has played very well when on the field, but his injuries have ended any chance he had at winning Offensive Player of the Year or MVP himself. Let's move on...

[Note: For comparative purposes on the percentages, the Eagles are currently 50% of the way through their season, so if a player is above that, they're on pace to exceed their total.]

Just when Sanders caught up with the pace he needed to eclipse the over, he got hurt again. If he comes back after the bye, there's still a chance he can get close to 1,400 yards in 12 or 13 total games played — but he'll need to bounce back and be ready to play next week in New York for that to be possible..

Believe it or not, Wentz still has a chance of reaching his preseason projected total of around 28 touchdown passes. However, he'll need to start throwing them at a pretty impressive pace — at least two per game for each of the final eight games this season. Over the course of his career, he's never had an 8-game streak of two touchdowns or more, but he has done it six games in a row twice. That being said, he only needs to average two per game, so if he can feast in his three remaining games against the NFC East, there's at least a path.

Reagor has a chance of reaching this milestone despite having missed five games this season. He will need to stay completely healthy and haul in at least 67 yards per game for the rest of the way.

Ertz is still out with a high ankle sprain. Is it possible he returns for the last six games and averages a touchdown reception in each of the six? Sure. But I wouldn't bet on it.

The Eagles need to go 6-2 over their last eight games to eclipse their projected 9.5 wins. That's a tall order, as they'll need to beat at least two of the Seahawks, Cardinals, Packers and Saints — in addition to handling their NFC East foes and the Browns in the season's second half.