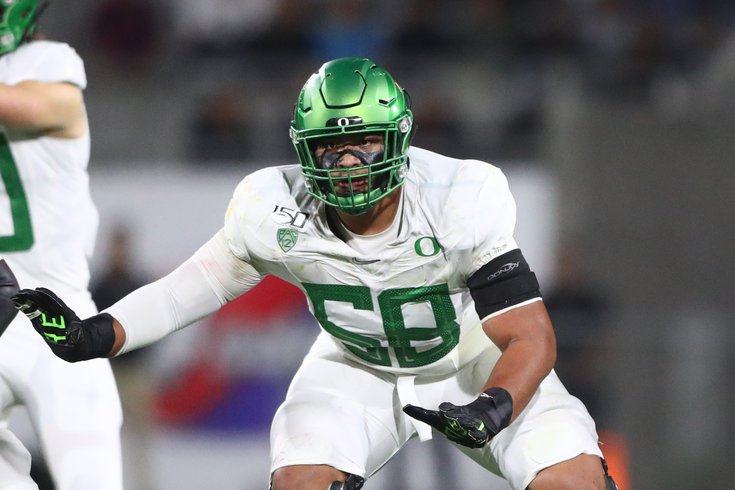 As long as you're taking in some college football action this Saturday, here are some players who could make sense for the Philadelphia Eagles in the 2021 NFL Draft. Since this is the Pac-12's first week of games, and since the Eagles have had so much success drafting Pac-12 guys 😉, it's a Pac-12-only list this week.

Lucas would have been a draftable prospect if he had come out last year, but he returned to Arizona State for his senior season. He is primarily an outside corner, which the Eagles still need, with some experience in the slot. He has the speed and quickness to stick with fast receivers, and despite his small build, he's a very willing tackler.

Arizona State Redshirt Senior Chase Lucas. Not a big guy, 6-0 176lbs but throws his body around. I'm looking for more man coverage reps. ASU plays a ton of off one, but so far I've been impressed with him reading his keys and shooting with no hesitation. #CRFB @CrockerReport pic.twitter.com/Nj3MKwZcsc

There's definitely some finger-wagging swag in Lucas, which will appeal to Jim Schwartz.

At 6'2, 230, Kuithe is undersized, but he has speed, he can break tackles after the catch, and he can line up all over the formation, including as a fullback.

From a big picture standpoint on the offensive side of the ball, the Eagles should transition from their 12 personnel-heavy offense to an 11 personnel-focused offense, now that they have some receivers worth playing/developing, and Zach Ertz could soon be on his way out of Philly.

Kuithe would make a lot of sense as a TE2 who the Eagles can mix in on 12 personnel looks sometimes, while also serving as a playmaking-capable tight end in the passing game should Dallas Goedert go down. He gives me sort of a better Trey Burton vibe. His lack of size should make him fall, but I like him early on Day 3.

(This game has been cancelled.)

In just 20 games at Colorado, Johnson has 12 sacks and 20 tackles for loss. He is an undersized, but disruptive interior defensive lineman.

Barring any sort of unknown injury or character concern, Sewell is a surefire top 5 pick. He won the Outland Trophy in 2019 for being the best lineman (offense or defense) in the country. He is already considered by some to be the best player in college football, a scary thought considering he'll still only be 20 years old when he's drafted next spring (assuming he declares). A look:

Even after Jason Peters moves on next offseason (we think?), the Eagles still have numbers at OT, with Lane Johnson, Andre Dillard, Jordan Mailata, and Jack Driscoll, but this is the kind of guy that you just take if he's there.

Of course, the Eagles would have to lose the rest of their games (or pretty close to it) to have a shot at him, but he's worth profiling now because he's going to be a name that everyone knows next April.

Holland has 9 INTs and 10 pass breakups over the last two seasons, playing a multitude of roles in the Ducks' defense, from slot corner, to deep safety, to dime linebacker.

The Eagles are prioritizing these "positionless" guys in their secondary, and Holland fits. Probably a Day 2, early Day 3 guy.