What they're saying: Wentz wins dubious midseason award; will Eagles considering benching him? 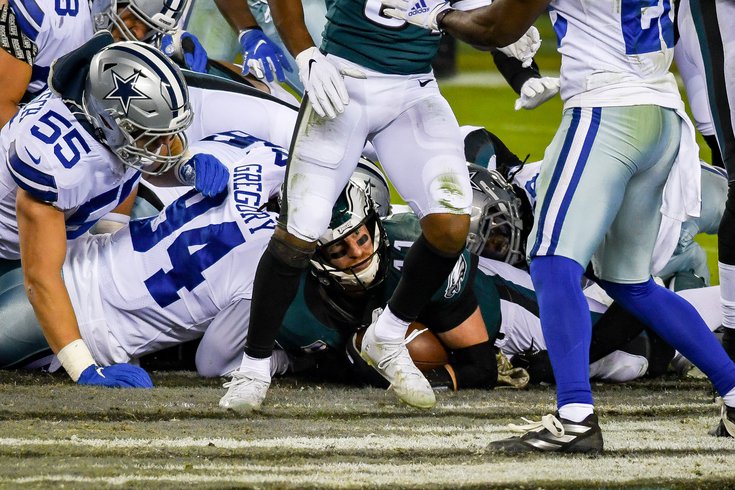 Quarterback Carson Wentz at the bottom of a pile during the Philadelphia Eagles win over the Dallas Cowboys.

The NFL trade deadline came and went on Tuesday without much fanfare, especially in Philly where the Eagles opted to stand pat and not make any moves for the first time since 2016.

We'll get to Howie Roseman's decision not to make a deal in a bit, but with the Eagles on the bye (and there not being any deadline moves to dissect) we figured it's as good a time as any to take a look at just what the hell has been going on with Carson Wentz this season — and whether or not the Eagles should bench him.

Over at ESPN, Kevin Seifert handed out some midseason quarterback awards, with most of them being positive. Not all of them were and, perhaps unsurprisingly, Wentz found himself as the No. 1 candidate for biggest disappointment in the NFL (No. 2 was Kirk Cousins).

Not enough people realize that Wentz -- and not the Giants' turnover machine, Daniel Jones -- leads the NFL in giveaways this season. Wentz has thrown 12 interceptions and lost four of his seven fumbles, putting his total turnovers (16) well above Jones' (13).

Nothing else should matter about how Wentz has played, even if he occasionally places a perfectly thrown ball in a key situation -- as he did on a game-winning, 18-yard touchdown throw to running back Boston Scott in Week 7 against Jones' Giants. Frankly, the Eagles are fortunate it hasn't hurt them worse than it has. Wentz's average turnover has cost them minus-3.5 expected points added (EPA), the 12th lowest among 38 players who have committed at least three turnovers this season. In other words, this could all have been much worse.  [espn.com]

Not making the grade

Paul Domowitch of The Daily News handed out grades for the Eagles at the midway point of the season. They weren't quite position-by-position and were a bit more general, with rushing offense, passing offense, rushing defense, etc. as the categories.

And the passing offense, which obviously covers more than just Wentz, didn't fair that well according to Domo. Here's a look at what the veteran columnist had to say:

That said, injuries are no excuse for the way Wentz has played this season. He had four more turnovers Sunday night against Dallas, giving him an NFL-high 16. His 12 interceptions are the most in the league and five more than he had all last season. He is 30th in passer rating (73.2), 31st in completion rate (58.4%), and 29th in yards per attempt (6.2).

He’s been sacked a league-high 32 times and has been under pressure on 36% percent of his dropbacks, which is the third-highest rate in the league, behind only the Giants' Daniel Jones (43.9%) and the Bills' Josh Allen (38.1%), according to Pro Football Focus. But Jones and Allen both have significantly higher completion percentages than Wentz on passes thrown under pressure. Wentz has completed just 38.8% of his under-pressure throws. Allen has completed 51.6% and Jones 47.5%. Both also have significantly lower sack rates on under-pressure dropbacks.

Wentz’s overall completion rate is more than five points lower than his completion percentage for his first four NFL seasons (63.8). He has particularly struggled on 0-to-10-yard throws. His 67.1% completion rate on throws from that distance is the lowest of his career. [...]

Over at BGN, Brandon Gowton offered up nine takeaways from the first half of the season for the Eagles, and among his ideas for the Birds was Doug Pederson benching Carson Wentz, an idea the head coach rejected on Monday.

Still, Brandon believes there's a case to be made for pulling Wentz should he continue to struggle. He's not advocating for a full-time switch to Jalen Hurts, but thinks the Eagles quarterback could use a wake-up call — and sitting down for a bit might provide just that.

The supporting cast hasn’t been ideal. The coaching staff could be doing better. I get that...They do NOT solely justify his status as arguably the worst starting quarterback in the NFL. His performance this season on the whole is simply unacceptable. [...]

I really felt like the coaching staff would’ve been justified for pulling Wentz after his fourth turnover. To their credit, not pulling him worked out as he delivered the go-ahead touchdown pass.

But if Wentz continues to struggle this badly, the Eagles shouldn’t be so reluctant to bench him during a game in the way that Andy Reid did with Donovan McNabb back in 2008. That strategy clearly lit a fire under No. 5. It’d be really interesting to see how Wentz responds in a similar scenario. It’d also be interesting to see how Jalen Hurts fares in relief duty.

To be clear, I don’t think the Eagles are at the point where they should be making a permanent change right now. They’re basically stuck with Wentz for 2021 so they have to find a way to try to get him right. But benching him should not be entirely off the table.  [bleedinggreennation.com]

Sitting Wentz to try to get his head right isn't the worst idea, but the problem with that comes in when you consider the guy who would be replacing him. If the team was sitting him down in favor of Nate Sudfeld, it wouldn't be much of a threat to Wentz and even a solid performance from the backup likely wouldn't breed a full-on QB controversy.

But could you imagine what would happen if Hurts, who the team spent a second-round pick on back in April, came in and looked better than Wentz? Even if he showed any glimpse of upside, which he almost certainly has, and didn't necessarily "outplay" Wentz, there would be calls from around Philadelphia for Hurts to be named the full-time starter.

Doug Pederson has gone on the record endorsing Wentz as the starter, saying that he has full confidence in his passer. And it left Reuben Frank with the impression that Wentz isn't going anywhere anytime soon.

Getting benched did wonders for a slumping Donovan McNabb in 2008 when Reid benched him in favor of Kevin Kolb for the second half of an ugly loss in Baltimore. Two months later the Eagles were in the NFC Championship Game.

So why not consider benching Wentz when he's been the worst QB in the NFL?

“Listen, Carson is our starter and we’ve got a lot of trust and faith in him that he can get the job done,” Pederson said. “And by no means was I in a position to make a decision or make a move yesterday.” [...]

No Eagles starting QB has been benched since Andy Reid benched Michael Vick in favor of rookie Nick Foles nine weeks into the 2012 season with the Eagles 3-6.

And it doesn’t sound like it’s about to happen any time soon.  [nbcsports.com]

Whether that's entirely true from Pederson — or there's a bit of concern that playing Hurts would shatter whatever confidence Wentz has left and would divide the fan base even further — is worth wondering as the Eagles prepare to embark on the second half of their 2020 schedule.

As we mentioned at the top, the Eagles didn't make any moves at the deadline, despite the fact that they're currently -275 favorites to win the NFC East, according to TheLines.com.

And NJ.com's Chris Franklin agrees with our own Jimmy Kempski that this was probably the best outcome for Philly. Here's why...

The Eagles are in a tough situation. The front office had to decide between adding pieces in the final year of a window with veterans versus adding pieces for potential retool next year.

The team will roll over the money they currently have under the salary cap, currently estimated by Spotrac to be a little more than $22 million, to alleviate the overage they face in 2021, estimated to be around $63.3 million. While they can convert the salary to a bonus as the team did with Fletcher Cox this year, saving more than $5 million, the team will have to make some cuts in other areas.

The Eagles have seven draft picks in the 2021 NFL Draft, ant those draft picks could be essential depth pieces for next year, some of whom may have to contribute immediately because the Eagles may need to fill the necessary holes at different positions after the team releases players get under the cap.

Roseman made the right decision by not trading away any of the pieces on his team. Rumors had begun to surface that the Eagles were shopping several players such as Will Parks, Zach Ertz, DeSean Jackson, and Alshon Jeffrey. Even with a 3-4-1 record, The Eagles find themselves with a legitimate chance at winning the NFC East and going to the playoffs.  [nj.com]

But that doesn't mean that the Eagles weren't close to making a deal...

Before the trade deadline, the Vikings had preliminary discussions with the Eagles about a deal for safety Will Parks, a source said. Vikings also had shown interest in Parks during free agency; worth keeping his name in mind as he hits the market again after this year.