John McMullen: It's time to accept that Eagles are just an ugly football team 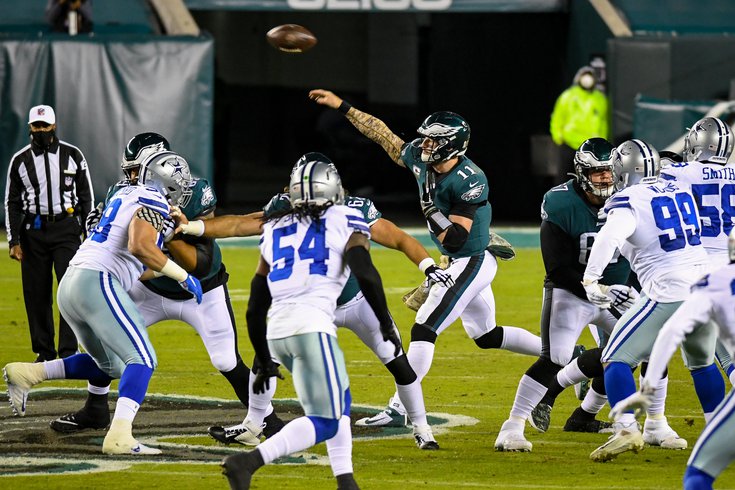 Carson Wentz was not at his best despite the Eagles' Week 8 win.

If you are looking for aesthetics, the Art Museum is about seven miles away from Lincoln Financial Field. In South Philadelphia on Sunday night you got a whole lot of ugliness but the end game went as expected with the Eagles (3-4-1) dispatching the reeling Dallas Cowboys (2-6) and a third-string quarterback rather easily, 23-9.

In doing so, Philadelphia took a large step toward gaining control of the NFL's worst division, the NFC East.

So what if NBC considered flexing out of the game at halftime for a re-run of "The Voice" or if the City weighed rerouting the National Guard to stop the blight on polite society? There was even talk the embattled year 2020 might distance itself from Eagles-Cowboys for fear of its reputation being sullied.

Typically when you turn the football over four times as the Eagles did on national television, you don't win many games, never mind games by two touchdowns, but the safety net for Doug Pederson and Co. manifested itself in the form of Ben DiNucci, the Cowboys' seventh-round pick out of James Madison via Pittsburgh, who was making his first professional start due to injuries to Dak Prescott and Andy Dalton.

The last time a rookie seventh-round pick won a game as an NFL starter was when Gus Frerotte did it 16 years ago with Washington so not much was expected from Dallas and DiNucci "delivered" on that sentiment, finishing a dismal 21-of-40 for 180 yards.

Perhaps the only upset came for those who went for the prop bet of no DiNucci interceptions. He managed to stay clean in that stat column despite giving Philadelphia defenders plenty of opportunities.

Rodney McLeod, Jalen Mills, and undrafted rookie Michael Jacquet had the best chances to cash in but couldn't corral errant DiNucci throws. McLeod, however, did do it in another way, scooping up a T.J. Edwards strip-sack of DiNucci and rumbling 53 yards for a score in the fourth quarter, essentially sealing the game.

Carson Wentz's own turnover-prone play, which featured two interceptions and two fumbles, rivaled DiNucci for ineptitude with the difference being the occasional big-time throw to the Delaware Valley's flavor of the month, Travis Fulgham.

Against any competent NFL signal caller, Wentz's four-turnover performance would have sunk the Eagles. In fact, the Eagles "superstar" actually somehow finished with a passer rating (61.2) that was worse than DiNucci (64.6) and threw for just 123 yards against a defense that has been allowing an NFL-worst 34.7 points-per-game coming in.

Take Fulgham, who had six receptions in seven targets for 78 yards and a nine-yard touchdown that proved to be the game-winner late in the third quarter, out of the equation and Wentz was just 9-of-20 for 54 yards on the night targeting everyone else. And the woe-is-me he's-got-no-weapons crowd had to ignore the returns of Jalen Reagor and Dallas Goedert.

"I have to be better," Wentz admitted. "There’s mistakes out there — some of it’s maybe not on the same page, some of it I have to, you know, the first fumble I should've thrown the ball away. That stuff I can keep cleaning up, and obviously it’s stuff that, individually, I can get better at.

"Some of these shots down the field, I’m going to keep giving these guys chances and I can be better and put the ball in the right spot, but I’m not going to change my aggressive mentality. We’re going to start connecting on some of those big plays. Obviously [the turnovers] hurt us a little bit today, but the defense played great and we got a win.”

You could have tacked on another Wentz turnover or two and felt pretty confident DiNucci still wasn't getting Dallas over the hump.

Once it became evident that the style points weren't coming for the Eagles and the only goal was to escape with heads above water and the Eagles did that thanks to their defense.

"A win in this league is a win, man," Pederson said. "They are hard to come by. There's never a pretty win. There's never an ugly win. A win's a win. We've got to start stacking them together."

When things pick up after the bye on Nov. 15 with the final leg of a three-game stretch in the division at MetLife Stadium against the Giants even Daniel Jones might seem like Aaron Rodgers next to what DiNucci gave the Cowboys.

From there, things pick up with competency in the form of Cleveland and Baker Mayfield before a murderer's row of a month — Seattle, Green Bay, New Orleans, and Arizona. The regular season then finishes up for the Eagles at Dallas and against the Washington Football Team at Lincoln Financial Field.

No matter how bad it gets in the second half, this DiNucci of divisions will provide the Eagles with a fourth consecutive postseason berth and an opportunity to change a narrative in January. The prediction models say the Eagles have a 67 percent chance of that happening after the win over the Cowboys.

And who knows? Maybe even those aesthetics return in 2021.

"We understand we can't turn the ball over, bottom line," Pederson said. "We can't turn the ball [over]. We're too good. We have got too much responsibility for everybody, me included, that we've just got to take ownership of it. We can't do the things that we're doing in order to really survive in this league.