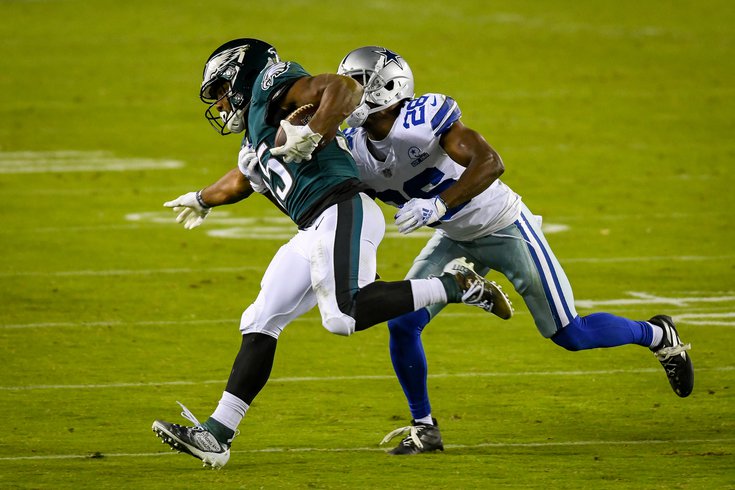 Eagles running back Boston Scott carries the ball against the Cowboys.

The NFL's worst division had an opportunity to showcase their best on Sunday Night Football, and it was the clash of garbage most expected. Philadelphia picked up another win with a 23-9 defeat of the Cowboys, and the Eagles somehow sit comfortably in first place heading into their bye week.

Here's what I saw. May we all never see it again.

• Travis Fulgham is the real deal, and there's an argument to be made that his emergence is more important than anything else from this depraved season. He is doing things that legitimate No. 1 wide receivers do, and from this point forward, he should be treated as their top threat in the passing attack. He has earned it.

The trust Fulgham has earned from Carson Wentz is legitimate and has helped the Eagles save themselves from their own quarterback. With sure hands, a big frame, and clean footwork along the sideline, this kid makes play after play, week after week, at all levels of the field and in every way imaginable.

First Eagles player to ever do that in his first 8 games
pic.twitter.com/lwbslNPAtk

Getting Fulgham off of the scrap heap is legitimately shocking, and if it weren't for the fact that they've bungled so many other roster decisions, we would be calling this a season-altering move. As it stands, it may still end up being a major impact move over the long-term, because he is killing teams this season, it just happens to be for a bad team sputtering through a depressing season.

• I'm not sure if T.J. Edwards is legitimately good or not, but he looks like he is pretty easily Philadelphia's best linebacker. He filled gaps well and shut down plays that otherwise might have been nice gainers for Ezekiel Elliot, and best of all, he is not Nate Gerry, which is a huge bonus.

• While we're on the subject of the defense, you could make the case that they simply did what they were supposed to/needed to do against such a terrible quarterback. But we've seen plenty of games like that in the past that went sideways for the Eagles, so credit to these guys for doing exactly what they needed to do in this stinker of a game.

Game-altering turnover to bail out the quarterback? Check. Elimination of big plays for an opponent with lots of wide receiver talent? Check. Keeping Elliot under wraps and not allowing him to break off a big one? Yup. There were solid performances all throughout the defense, from Brandon Graham to Edwards to Rodney McLeod being his usually steady self on the back end.

Of course, they got a big assist from DiNucci, whose suckiness I can't emphasize enough. Hard to give up a big passing play when any throw beyond 10 yards looks like it was the target of a skeet shooting session. But this was still a fairly comprehensive performance from the defense, opponent notwithstanding.

• Do I think this was a play that should have stood upon further review? Absolutely not. Does that matter now? Definitely not.

Defense gets it done.#DALvsPHI | #FlyEaglesFly

Great play by the aforementioned Edwards to get the ball loose with a big hit on DiNucci, and good heads up football from McLeod to scoop and score on a play that they all could have just given up on. And if they had, based on how they called it, Dallas would have had a chance to keep the football and score a potentially decisive touchdown on the drive. The little things add up.

• What can you even say about this Wentz performance? The final 30 minutes could have been the greatest stretch of QB play the sport has ever seen and it still may not have been enough to erase the stink of the first half. Four turnovers on two fumbles and two interceptions for the game is simply atrocious.

The evidence suggests you can't pin it on the skill position guys anymore. Fulgham has proven to be a week-to-week stud that may well be part of the core moving forward. Jalen Reagor's speed has looked dangerous in short spurts. Greg Ward is Philadelphia's modern equivalent of Jason Avant, steady as they come on third down. Even John Hightower, while seemingly unable to track a deep ball, has proven he can beat guys downfield.

Yet here we are, looking for excuses for why this guy can't consistently deliver, why he throws the ball into double coverage, why he can't diagnose a zero blitz, why he has a man deep and throws it to the area of the field his man is not running toward. This is year five. He is leading the NFL in turnovers and the team is bad, in spite of some nice stretches from Wentz that put them in a position to win games they probably didn't deserve to.

As a thinker, he doesn't diagnose with the speed and accuracy he should. As a thrower, he constantly sails throws that should go for easy completions. He doesn't hold onto or get rid of the ball when he should, he rarely (if ever) audibles the team into a productive play after he makes his pre-snap diagnosis, and when he gets in a bad rut, he struggles to get out of it, compounding his mistakes with continued (and often worse) errors.

There are nits to pick with the playcalling, the decision-making, and a whole lot of other stuff, but Wentz was by far the biggest problem on Sunday night. There's a reason a lot of fans have begun pining for a look at the guy they took in the second round this spring — Wentz is not trustworthy and not good enough. He was the worst QB on the field for most of the game in spite of Ben DiNucci turning in one of the most impotent performances from an NFL quarterback you could imagine.

• If there was ever a game to pull the quarterback and see what you have with the young backup, this was it. Wentz clearly did not have it, and Doug Pederson would have had a built-in message (or excuse) no matter which way the game went from there. If Hurts shows out, that's a good problem to have moving forward. If Hurts plays terribly, you emphasize that you thought Wentz needed to watch the game from the sideline after going through a really tough stretch.

Put it this way — this dude has not earned the right to go down with the ship. You drafted a quarterback in the second round, but he can't even get a real shot when the starter has four turnovers through 2.5 quarters? Why bother with the pick at all? In what context is he ever going to get a chance to play and either develop or increase his trade value?

• An optimist might point out that all you need to do is win the game, not necessarily win it in inspiring fashion, but anyone with two eyes can see this team is doomed to fail. The Eagles are getting healthier than they were a few weeks ago, they're up against terrible competition, and they continue to look like trash. This is a rotten football team, and no one should try to convince themselves otherwise.

Philadelphia may have its hands tied at the trade deadline because of injuries to key veterans they might be able to get value for (most specifically Zach Ertz), but the rest of the year should be spent on development and talent identification, not trying to extract as much value from the vets they have. That means playing Jordan Mailata at left tackle, leaving the vet wideouts on the bench even if they get healthy, and perhaps even longer stretches with Hurts in at quarterback, seeing what you have so you can make more informed decisions in the offseason.

The "any given Sunday" mentality is part of what makes football great, and this division is so crappy that the Eagles are justified thinking they can win this division and make the playoffs. That can't make them lose sight of what they are and what is most important to accomplish.

• How do you pick up a false start penalty on the very first play of the half on offense? You had all of the halftime break to prepare for that play! A microcosm of how bad this team is.

• The shame of Wentz's piss poor outing is that we didn't get to laugh more at stuff like this.

YOU'RE ON NOTICE MAHOMES pic.twitter.com/k5SLLCFMdW

Should have been a banner night for laughing at the Cowboys. A recovered free-kick after taking an intentional safety was very nearly their smartest and best offensive play of the evening.

Three hours of pain is what we got instead. Maybe we'll all laugh at it later.

• The spot on the QB sneak from Ben DiNucci that Dallas "converted" for a first down was absolutely terrible. There is no way in the world he made forward progress on that play.

That would have been the single worst call of the game if not for the fumble recovery touchdown that clearly should have been down by contact and recovery for Philadelphia, but what can you do? Not like they have access to video replay that is automatically triggered on all scoring plays and turnovers.

• Okay, a little bit of laughing at Dallas' expense: Tony Pollard is straight-up better than Elliott at this point, which makes the pay discrepancy between the two and the top five draft choice used on Elliott look even funnier.

• Whatever man, at least this game is over. Eagles got the W and accomplished what they needed to in the end. Burn the tape and never speak of this game again.