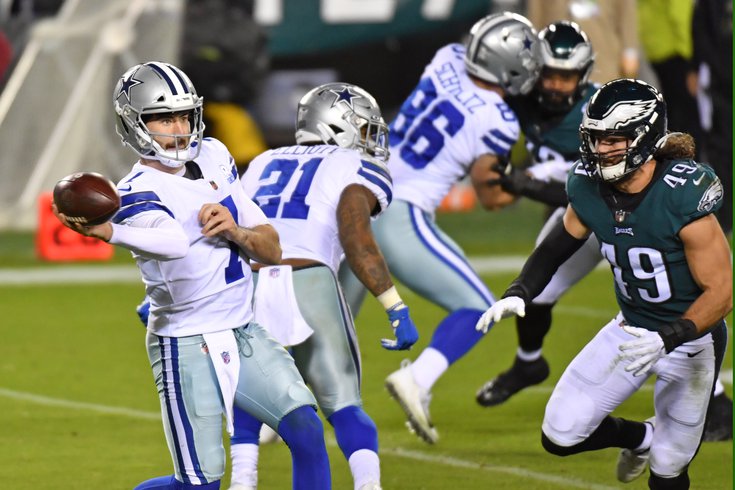 Before we even get started with the hierarchy/obituary this week, we should first note that the NFL may expand the playoffs to 16 teams this season, to make sure billionaire owners can maximize their revenue account for games lost due to COVID.

NFL competition committee expects to present a resolution to owners based on a contingency of having a 16-team playoff season (8 in each conference) if games are lost due to the pandemic, especially as bye weeks disappear, according to league sources. Committee met by zoom today.

Anyway, for disclaimer purposes, had a 16-team playoff existed from Day 1, I probably wouldn't have killed off the Falcons or Vikings just yet. Therefore, should I need to revive either of those two teams, as the president would say, I take no responsibility for that failure.

Anyway, there are no new obituaries this week. 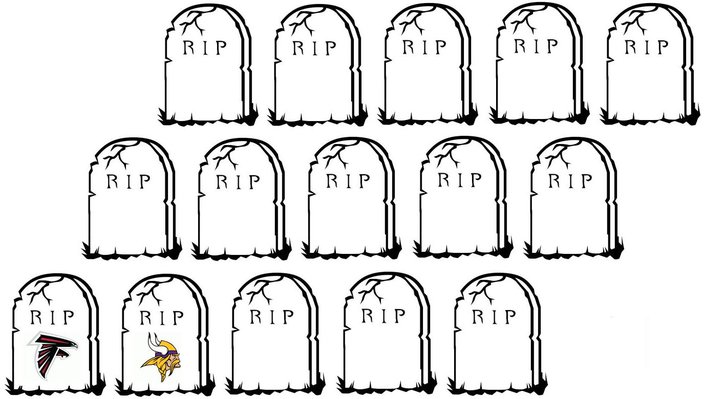 14) Cowboys (2-6): The Eagles played one of their worst games of the Doug Pederson era on Sunday night, and they still beat this dog poop team by two touchdowns. Before some of their best players started going down, the Cowboys weren't good. After the injury carnage, they're easily the worst team in the NFC. With a point differential of -81, the Cowboys are 27 points worse than the next closest team in the NFC, and only the Jets have a worse point differential in the NFL, at -144.

We would have eulogized them this week, but Tuesday is kind of an important day in this country, and I want to be able to give Dallas its proper sendoff. They're 9.5-point underdogs against the Steelers, according to TheLines.com, so we shouldn't have to wait long.

13) Giants (1-7): The Giants have continued to compete. They've lost three games by three or fewer points, one by four, and one by eight. They've really only had one blowout this season, a 36-9 loss to the 49ers in Week 3. Compare that with Dallas, who have lost their last three games by an average of 21 points, and the Giants don't look so bad, even at 1-7.

• 2012: They went 10-6 in Robert Griffin III's rookie season, and were quickly wiped out in the wild card round by the Seahawks, with RG3 tearing an ACL. The next closest team in the NFC East was the Giants, at 9-7.

I'm smelling a Week 17 "NFC East championship game" between the 5-10 Football Team and the 5-9-1 Eagles. If there's a year in which the Football Team can grab their fourth BS divisional title in almost 30 years, this is it!

11) Panthers (3-5): Christian McCaffrey could return this week against the Chiefs, after suffering a high ankle sprain Week 2, which really only matters for people who have him on their fantasy football team. If you're the Panthers, what's the rush? Why waste tread on his tires, unless he's truly 100 percent?

9) Eagles (3-4-1): When I look back at past Eagles games in the time I've covered the team, there's typically something (usually a bunch of things) that I'll remember vividly about almost every game. It's rare that I can look at a game and can barely remember anything about it.

Looking back at past schedules, I think the best example, personally speaking anyway, was a win over the Bills in 2015. That was LeSean McCoy's return to Philly, but other than that, I got nothing. In 10 years, I wonder how I'll remember this one? Like, will I remember Ben DiNucci's name? That'll probably be it, if anything, and maybe this specific throw:

YOU'RE ON NOTICE MAHOMES pic.twitter.com/k5SLLCFMdW

Because otherwise, that was as forgettable a performance by two teams as I've covered since I've been a professional NFL reporter.

8) 49ers (4-4): Alright, so the Niners might be more injured than the Eagles and Cowboys. Good Lord:

You could field an entire team with this list.

22 players currently out, likely 24 by end of day.

Another 8 players have missed time due to injury. pic.twitter.com/hYfmqUYYha

This won't be the Niners' year, and it'll be interesting to see what they do with Jimmy Garoppolo this offseason, who just isn't good enough to lead this otherwise Super Bowl-worthy roster. They can get out of his contract with little pain during the 2021 offseason.

Will they lose enough games the rest of the year to have a shot at, sayyyyy, Trey Lance of NDSU? If not, maybe Zach Wilson of BYU will interest them?

7) Bears (5-3): Matt Nagy is a bad head coach, and the Bears aren't going anywhere until they replace him with someone better. At the end of regulation on Sunday, the Bears trailed by 3, and had one last chance to either tie or win the ballgame in regulation, starting at their own 32 with 1:51 to go.

As you have all seen in today's NFL, 1:51 is plenty of time to drive 68 yards for a go-ahead score. In the middle of that drive, the Bears had the following sequence:

• 1st and 10 at CHI 45 (1:33): They complete a short pass to Allen Robinson over the middle. With the clock running, they opt not to call a time out, and they quickly get up to the line of scrimmage. That's fine so far.

I mean, it's dumb even if you have a running back capable of making a big play, but when you have a "three yards and a cloud of dust" guy like Montgomery, who only has five career rushes of 20-plus yards, what's your upside here? Anyway, clock continues to run...

They ran three plays, in which the Bears didn't threaten the Saints down the field, at all, resulting in 8 yards, 55 seconds off the clock, a burned timeout, and facing a 4th and 2.

But beyond all that, Nagy can't even seem to get along with Nick Foles. Via Jason Lieser of the Chicago Sun Times:

Something isn’t quite right between coach Matt Nagy and quarterback Nick Foles. Their partnership has been choppy from the beginning, exacerbated by having no offseason, and the ongoing offensive slump isn’t helping.

It’s not a full-blown rift, but it’s something.

In the last three weeks, Nagy went nuclear about a delay-of-game penalty coming out of a timeout against the Panthers, spent multiple days rehashing a comment Foles made about play-calling to a broadcast crew and probably wanted to chuck Foles’ cheat-sheet wristband across the room Sunday.

Anyone can see there’s a disconnect.

He's lucky he didn't have 4 or more INTs.

Side note: Speaking of coaches who don't know what they're doing when it comes to situational decision-making, enjoy this gif of 2017 NFL Coach of the Year Sean McVay punting from the Dolphins' 36:

5) Saints (5-2): The Saints have a four-game winning streak, but by a total combined point differential of only 15 points. They're winning close games, which is fine, but not what we're used to seeing the Saints do to below average teams. Their 5-2 record is about where they would be in any normal year in which they were clear Super Bowl contenders, but they just don't feel like that in 2020.

Drew Brees is clearly in decline, and the Saints' defense has allowed at least 23 points in all seven of their games this season.

Huge game on SNF this week, by the way. Saints at Bucs.

4) Packers (5-2): The Packers' season ended in embarrassing fashion last year, when the Niners ran all over them, and Jimmy Garoppolo had single-digit pass attempts. Those old demons reemerged against the Vikings on Sunday, when Dalvin Cook ran all over them, to the tune of 30 carries for 163 yards and 3 TDs.


Look at how many of those runs are out of the i-formation, or out of 3-TE sets, which you just don't see much of anymore. The Vikings were telling the Packers they were going to run it, and the Packers couldn't stop it. Highly alarming.

3) Buccaneers (6-2): I don't know if he has always done this, but on his final kneeldown Monday night, Tom Brady made sure he minimized the loss of yardage, getting -1 yard in the stat sheet instead of -2 or -3, lol.

Also, guess what! He shook hands after the Bucs' win.

2) Cardinals (5-2): The Cards had a bye following their impressive 37-34 OT win over the Seahawks last week. Tough stretch for them upcoming:

1) Seahawks (6-1): Not to beat a dead horse here, but how could any talent evaluator look at this monster and say, " I think we should draft J.J. Arcega-Whiteside instead."

DK Metcalf was such an obviously better prospect at the time, and we can see what each player has been in their short time in the pros. The Eagles' front office is going to have to hear about this miss for a long, long time.

By the way, I love that he can wear a pacifier mouth guard and nobody has jokes.