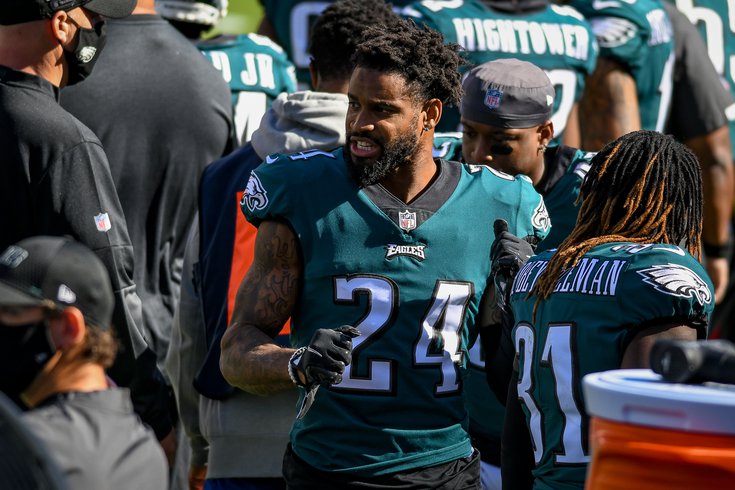 It may have taken half the season, but for the first time all year the Eagles exited their Week 8 win over the Cowboys without any new injury concerns. And, with the bye week on the horizon, this could be a much healthier team in Week 10 than the one that walked off the field at the Linc on Sunday night.

The biggest concerns coming out of the weekend were cornerback Darius Slay (knee) and defensive tackle Malik Jackson (knee), both of whom left the game with separate injuries and did not return.

First, there was Slay, who remained on the Eagles sideline when the team came out of the locker room to start the second half. The team quickly put an injury designation on him and he never returned to the game. Jackson left later in the second half when he suffered a quad injury that sent him to the locker room. No word on whether or not it's the same quad that kept Jackson out previously, but it doesn't seem like it's going to matter, as head coach Doug Pederson said on Monday that the two were going to be just fine.

"Both of those guys are OK," Pederson told reporters. "We didn't have any significant injuries coming out of the game, so this week is getting to us at the right time with guys getting healthy and those two guys should be OK moving forward next week."

Is... is that even allowed? Finishing a game without losing multiple starters for multiple weeks? Apparently it took the Eagles half a season to figure that out.

In addition to staying healthy, the Eagles also got several key returns from injured players against the Cowboys, including Jalen Reagor, Dallas Goedert, T.J. Edwards and Jason Peters. And after not suffering any more worrisome injuries on Sunday, the Eagles could find themselves coming out of the bye week as healthy as they've been since the beginning of the season.

For starters, the team should also be getting starting right tackle Lane Johnson back from injury — and with Jordan Mailata's development, the Eagles can now feel a bit more confident that should Johnson suffer a setback or Jason Peters be unable to finish a game, something that was a brief concern in his return on Sunday when he came up limping after a play. Johnson had been dealing with a troublesome ankle injury all season before suffering an MCL sprain against the Giants. He was planning on playing through that injury this weekend, and wasn't on the Eagles final injury report. But over the weekend, he suddenly was downgraded to "questionable" and was ultimately inactive.

"It was unfortunate," Pederson said about Johnson's last-minute absence. "He had a really good week, trending in the right direction. Friday, Saturday practices were good, and [he] just woke up on Sunday not feeling, just not there. So we didn't want to risk putting him out there and [possibly] missing him for more weeks in advance. It was just unfortunate that it happened, but I thought Jordan Mailata really stepped in nicely there with that position and did a nice job."

In addition to Johnson, the Eagles should also be getting Miles Sanders back from injury before too long, and possibly by the time they take on the Giants in Week 10. Zach Ertz shouldn't be far behind, as he'd be eligible to come off injured reserve the following week. And maybe, who knows, Alshon Jeffery will finally be ready to play assuming the Eagles really they can't find a trade partner before Tuesday's deadline.

The Eagles might only have been able to win three of their first eight games, but they appear to be getting healthy at the right time and have won two straight (albeit against two god awful teams) heading into the bye week. And now, with what feels like a commanding 1.5-game lead in the NFC East — and oddsmakers having them as -250 favorites to win the division, according to TheLines.com — maybe, just maybe, things are starting to trend in the right direction.