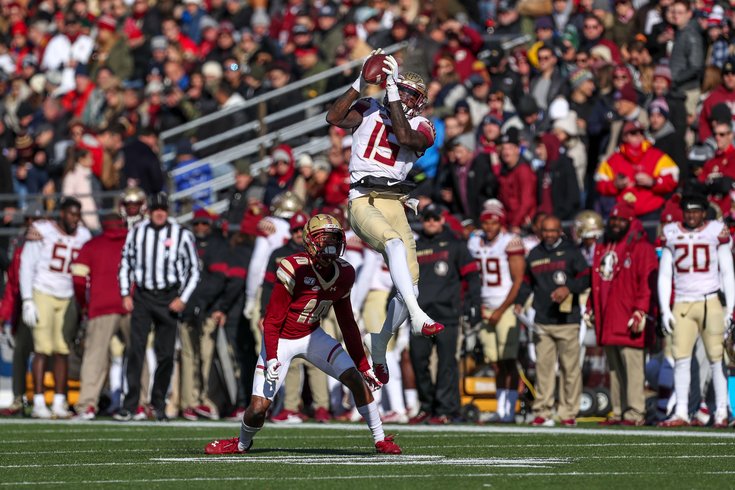 Jones leads the nation with seven sacks, with three sacks each in a pair of games against Boston College and Louisville. As such, people are going to take notice. In 2019, Jones had 8.5 sacks and four forced fumbles.

He has a good burst at the snap, a nice dip and rip move around the edge, and a few counters (speed to power, and a straight arm move) to complement to outside rush, and (Andy Reid alert) he's thought to have a good motor. A look:

While the Eagles have gotten good play from their defensive line this season, they would be smart to continue to add pieces to the edges, with Brandon Graham now 32 years old.

Nasirildeen plays something of a hybrid safety-linebacker role for the Seminoles. He put up good numbers in 2019, collecting 101 tackles, three forced fumbles, and two INTs before a torn ACL ended his season.

In the Eagles' scheme, Nasirildeen projects to linebacker, in my opinion, where he can use his impressive length and athleticism to lock down tight ends, while also being physical enough to handle run responsibilities.

It should be noted that Nasirildeen is still recovering from his ACL tear, but is expected to return at some point this season. He's a first round talent who would be nearly two years removed from his injury when the 2021 season begins, but who may fall in the draft because of that injury concern.

Terry has great combination of length and speed, with a good yards per catch average in his three years at Florida State:

He'll have the occasional drop, but there's a lot to like about his game, including his run after catch ability. A highlight reel:

As you can see, there are a lot of slants, posts, and go routes in the video above, which is fine in the NFL. DK Metcalf didn't run much more than that as a rookie with the Seahawks.

In the 2020 draft, the Eagles selected K'Von Wallace, who is suited to play something of a Malcolm Jenkins role in the Eagles' defense. LeCounte is a safety prospect who fits in more as the deep middle Rodney McLeod safety.

LeCounte has become a ballhawk, as he had four INTs, two FFs, and three FRs in 2019. He already has a pair of picks in two games in 2020.

LeCounte is smart, and well-liked by his teammates, coaches, and Georgia's media, and he has become a leader on the field, communicating calls and alignments to the rest of the secondary.

The concern is his tackling, as he had 15 missed tackles in 2018, according to this site, and some teams will be turned off by his lack of size. I think he'd be a nice value in the third round.

We previously profiled star Bama RB Najee Harris, but as always with the Crimson Tide, they have multiple draftable backs on their roster. Over his career at Alabama, Robinson has been behind guys like Najee Harris, Josh Jacobs, Damien Harris, and Bo Scarbrough, and as a result only has 207 career carries. One of the things that appealed to the Eagles about Miles Sanders was that he too had low mileage in college.

Robinson is a big back, as you can see, at 6'1, 228, and while he isn't often going to break off long runs, he is a hard runner who makes opposing defenders put him on the ground. He is also a competent pass catcher out of the backfield.

One of the things the Eagles have not capitalized on is the late-round running back market, which tends to have more late-round value than other positions. They have instead prioritized running back during the free agency phase of the draft. Robinson is a guy who could be available late in the draft who might have gone higher if he had more opportunities to show what he could do in college.