Week 6 NFL picks: Rounding up the experts' predictions for Eagles vs. Ravens 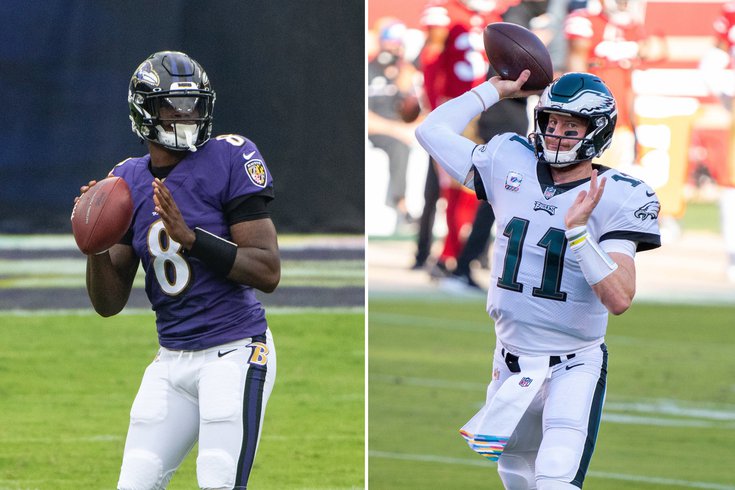 For the third week in a row, the Eagles will enter their Week 6 game against the Ravens as at least touchdown underdogs — they're currently 7.5 point consensus underdogs, according to TheLines.com. Of course, the Eagles are 1-1 in those games, and for the first time since their tie against the Bengals, the Birds will be playing at home in South Philly. Morever, for the first time all season, there will be fans in attendance after COVID-19 restrictions kept them out for their first two home games of the season.

Carson Wentz has looked better the last few weeks, the defensive front has been causing problems for opposing quarterbacks, and there's a chance the team could get DeSean Jackson back this week, giving them a nice No. 2 option to go alongside WR1 Travis Fulgham.

But will any of that make a difference against the Ravens? According to the predictions we found while scouring the web, no, it probably won't.

That because this Eagles team still has plenty of deficiencies — whether due to injuries, poor roster management or otherwise — and is going up against one of the best teams in the NFL, with the reigning MVP at quarterback. Lane Johnson looks like he could be out, leaving Jason Kelce as the lone projected starter in there protecting Wentz. Nate Gerry has been one of the worst three-down linebackers in football — and they haven't taken him out, which should tell you something about the guys behind him on the depth chart. And there are just a ton of question marks almost wherever you look on the team.

So, perhaps that's why 62 of the 68 predictions we've rounded up below are in favor of the Ravens, while just six people are picking the Eagles to win. Moreover, five of those six are local writers (four of them from the same site), meaning just one lone brave national writer is picking an upset in Philly. Yikes.

Let's dive in and see who is actually picking the Eagles, starting right away with one of our own writers going against the grain...

• PhillyVoice staff: Finally, our staff had its first winning week of the season last week, going 6-1 on the Eagles-Steelers game. This time around, it's another 6-1 split picking against the Birds. Here's what Kyle Neubeck, who is predicting a 30-20 win for the Ravens, had to say:

The Ravens season to date has been filled with comfortable wins, outside of their loss to the reigning Super Bowl champs in week three. The Eagles are getting fans back in the stands this weekend and Carson Wentz looks like he’s rounding into form, so there’s room for a bit of optimism.

Just not enough for me to think they have a chance in this one. Baltimore has crushed common opponents the Eagles tied or lost to. No reason to overthink this.

• Inquirer.com: Not only are all four of their Eagles writers picking against the Birds, not a single one thinks they'll cover the 7.5-point spread. Here's how Les Bowen sees the game playing out...

The Eagles' offense looked a lot better last week against a good Steelers defense despite all the injuries and key pieces missing. In a normal circumstance, that might lead one to think, “Hey, maybe they win this week.” But back during the summer, before the injuries, if you were asked to pick one home game on the schedule you thought would be a loss, this would have been almost everyone’s pick. The 4-1 Ravens sure look like the most complete team the Eagles have played. Their defense is giving up a league-low 15.2 points per game. They have the NFL’s best point differential, 14.6 points per game. They are scoring 29.8 points per game, which ranks only eighth in a year when offenses are going crazy (except the one we watch every week).

I guess there are ways the Eagles could win. Baltimore might take them lightly. Travis Fulgham could somehow break every franchise receiving record against a top-echelon secondary. Miles Sanders could take over the game. The Eagles’ defense could stop the run well enough to make Lamar Jackson throw a whole bunch, which he probably can do successfully but really hasn’t had to this season. He ranks 27th in pass attempts. But really, this is a mismatch, in terms of healthy talent.

• NJ.com staff: All six of their writers are picking the Ravens to beat the Eagles on Sunday, but their score range anywhere from a close three-point game to a three-score blowout. Here's what beat writer Mike Kaye, who is predicting a big loss (but not the biggest of his colleagues), has to say about this one...

The Eagles are going to walk into a perfect storm of terribleness at The Linc on Sunday. The limited fans in attendance will be in line for a bloodbath, as the Ravens are a terrible matchup for the home squad. Ravens quarterback Lamar Jackson will run all over Jim Schwartz’s unit and the hot seat will burn the defensive coordinator’s backside after this one. Greg Roman is going to create headaches for Eagles fans everywhere.

• Bleeding Green Nation staff: Another week, another relatively even split for the normally Eagles-heavy BGN staff. For the second time in three games, more of their writers (5-4) are picking against the Birds than are picking them to win, and that's a rarity.

• ESPN staff: For the third week in a row, not a single ESPN expert is picking the Eagles.

The following two points in each statement can be simultaneously true:

In short: The Ravens' B game is plenty.

• CBS Sports staff: Another clean sweep for Baltimore, with all eight of their experts are picking against the Eagles, including Pete Prisco, who sees a 29-20 win for the Ravens on Sunday.

The Ravens haven't quite played as well on offense this season as expected. But that will change against the Eagles. Look for Lamar Jackson to have a big day against the Eagles secondary. The Ravens defense will also get the best of the Philly offense. Ravens win it big.

The Ravens are running roughshod over every team not from Missouri.

Carson Wentz is looking better the last couple weeks than he did in his disastrous start, but the Ravens’ defense should dominate the Eagles up front and the Ravens’ running game will sit on the lead.

• USA TODAY Sports staff: All seven of their writers are picking the Ravens to beat the Eagles.

• SB Nation staff: Just three of their 10 experts think the Eagles will win on Sunday — but two of those three are BGN writers whose picks were already included above. So the real count here should be that seven of their eight experts are picking the Ravens.

When the Baltimore Ravens win, they really win.

Each of Baltimore's last seven victories, and 12 of its last 14, have come by at least 14 points. So while the Ravens are spotting the desperate Philadelphia Eagles slightly more than a touchdown Sunday, most of our writers aren't afraid to lay the points.

That said, this isn't a clean sweep, and the Ravens have been hit by the injury bug, too. Standout left tackle Ronnie Stanley (shoulder) and playmaking cornerback Marcus Peters (thigh) have both missed practice time this week, and we've seen what the veteran, well-coached Eagles are capable of with their backs against the wall.

• Sheil Kapadia, The Athletic: Each week, former Eagles beat writer Sheil Kapadia (now a national football writer for The Athletic) makes picks against the spread for every game. This week, he's picking the Ravens to not only beat the Eagles, but also cover the 7.5-point spread as well.

This is not the same Ravens offense we saw a year ago. Baltimore has dropped to 21st in TruMedia’s Expected Points Added (EPA) model. The Ravens’ defense, however, is first. Carson Wentz played his best game of the season in the Eagles’ Week 5 loss against the Steelers, but he’ll be tested by the Ravens’ blitz schemes. Baltimore blitzes at the second-highest rate of any team, and Wentz ranks 29th among 33 qualifying quarterbacks in success rate against the blitz. The Eagles probably need to steal a score on special teams or defense to produce enough points to pull off the upset. I don’t see it.

The Ravens' defense has found its footing since the loss to the Chiefs, and they have allowed just 10 points per game in victories against Washington and Cincinnati. The Eagles present a stiffer challenge, but Baltimore’s offense is just too efficient right now.

The Ravens aren't running as freely with Lamar Jackson and their committee of Mark Ingram, J.K. Dobbins and Gus Edwards as expected. They also haven't really expanded their passing game beyond Mark Andrews and Marquise Brown. This is a tough spot for a struggling Jackson, against a strong defensive front that excels at stopping the run and applying pressure. On the other side, Carson Wentz faces an active Baltimore front seven who can compress Philadelphia's offense, too. Jackson and Wentz play to a tough draw, with a big late kick by Justin Tucker making the difference.