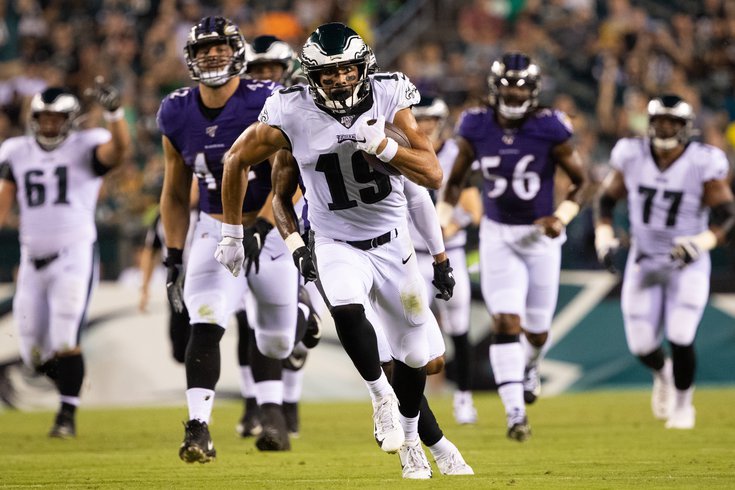 Remember when J.J. Arcega-Whiteside had that good preseason game against the Ravens?

For the gambling enthusiasts, here are my Week 6 NFL picks. To note, the team logos indicate who I think will win the game, not cover the spread. At the end of the picks, I'll note a few teams that I like based on the spread. All the below spreads are courtesy of the consensus Week 6 odds at TheLines.com.

Ravens (-7.5) at Eagles: Remember the good old days, when Eagles fans worried about "trap games" on the team's schedule? By "trap games," I mean seemingly easy opponents that they could maybe overlook because more important opponents loomed on the schedule ahead?

Those were the days, huh? Well, the Eagles are the trap game now. After this Sunday, the Ravens face the Steelers, Colts, Patri*ts, Titans and Steelers (again), so it would be easy for Baltimore to overlook this comparatively bad and unimportant Eagles team.

That's about all I got in terms of the Eagles' chances of winning this game, because the matchups overwhelmingly favor the Ravens, a team that puts a whole lot of pressure on opposing linebackers to stop their elite running offense, and ability to attack the middle of the field. Of course, as we've seen this season, the Eagles' linebackers have been woefully incompetent.

Carson Wentz does seem to be shaking his early-season struggles to some degree, and the belief here is that the Eagles will be able to put some points on the board, but Lamar Jackson and the Ravens' offense is just too dynamic for them to handle right now.

Football Team at Giants (-2.5): I wondered what this line would be, and I'm mildly surprised that the Giants are favored. The Football Team at least has that very deep and talented defensive line, while the Giants have... um... nothing? It's too bad this game isn't on Thursday night. It would have been fun to make fun of these two disastrous franchises.

Texans at Titans (-3.5): This line scares me a bit. The Titans had a signature blowout win over the previously undefeated Bills on a national stage Tuesday night, complete with what is going to be one of the highlights of the season.

Whenever that happens, that team tends to be overvalued the next week. On paper, this line looks like a no-brainer Titans play. I guess it's only 3.5 points because they're playing on a short week? I really want to take the Titans here to cover, but my gut is telling me no.

Falcons at Vikings (-4): The Vikings are 1-4, but have actually looked decent, while the 0-5 Falcons look like they're ready to just pack it in. I like the Vikings' chances of piling points on this horrid Falcons defense.

Bears at Panthers (-1.5): Ever since Christian McCaffrey got hurt, the Panthers have become kinda fun, as their offense now utilizes their legitimately good WR duo of Robby Anderson and D.J. Moore instead of just handing the ball or throwing the ball to McCaffrey on every play.

Browns at Steelers (-3): Are the Browns good? I think the Browns might be good. However, what they do best (run the football) lines up with what the Steelers arguably do best (stop the run).

Bengals at Colts (-8): With the exception of their 24-point loss last week to the Ravens, the Bengals have at least kept every game close, and it's not as if this Colts team is some sort of juggernaut. I'll take the 8.

Broncos at Patri*ts (-10): I picked the Broncos +8 in this matchup last week before it was postponed, but that was when I thought Cam Newton would still be out. Even with Newton back, 10 points remains a really tempting number. I mean, are we pretending that this Patri*ts team is still elite? I'll take the cheaters to win, but 10 points is too hard to pass up.

Jets at Dolphins (-9.5): The survivor pickings are slim this week, and I imagine the Dolphins will be a popular pick. This is the kind of week in which like half the participants get eliminated. Still, I'll take Miami, because the Jets are just so, so bad.

Packers (-1) at Buccaneers: The Packers had their hot start to the season interrupted by an untimely bye Week 5, but they'll get Davante Adams back, which feels like a big deal, since the Packers will be throwing a lot on this Bucs defense that is only allowing 2.7 yards per rush this season.

On a side note, I always love a good -1 spread.

Cardinals (-2) at Cowboys: The Andy Dalton era will be underway this Sunday in Dallas, and the feeling here is that while he is obviously a downgrade from Dak Prescott, he's one of the best backups in the NFL, and he'll be fine. The Cowboys will continue to score, because they're loaded with offensive weapons. Furthermore, the Cowboys' loss of both starting offensive tackles won't hurt them as badly against this Cardinals team, which lost star pass rusher Chandler Jones for the season.

The Cardinals are 3-2, but they have played five teams with a combined record of 7-17, losing to the garbage Lions along the way. They're on the upswing, but it's too soon -- and they remain too erratic -- to be two-point favorites on the road against the Cowboys.