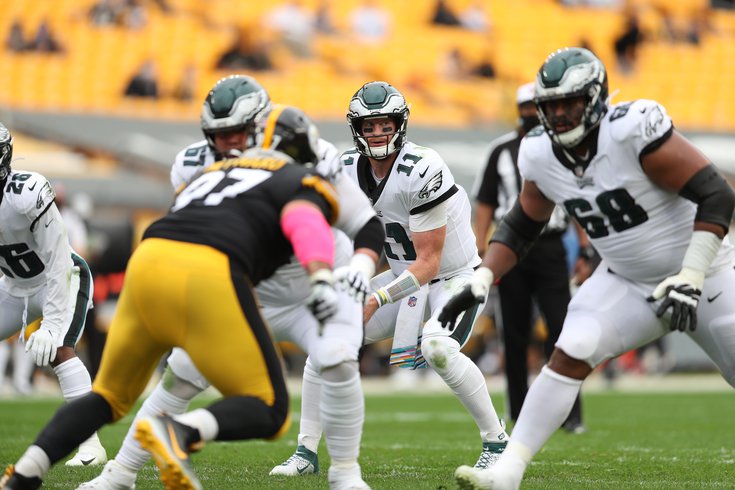 Here's where people around the country have the Eagles ranked after Week 5 of the regular season. Oh, and here's our version of these sellout rankings, too.

The Eagles have the smallest amount of cap dollars ($4.3 million) committed to linebacker in the NFL, and it shows. Opposing tight ends have racked up 32 catches for 323 yards and five touchdowns through five games. Much of that damage has come with linebackers in coverage. The position is ranked low (last?) on the team's priority list when it comes to roster construction. While there is some merit to that philosophy given how often defenses are in subpackages these days, the Eagles have taken it to an extreme -- and it's hurting them.

#JimmySays: I would say that the Eagles ranking linebacker last on the priority list is accurate. I would also agree they have gone too far in deprioritizing the position.

There were positives to take out of Sunday. ﻿﻿Miles Sanders﻿﻿ ripped off a 74-yard touchdown run in his return to his hometown of Pittsburgh. ﻿﻿Travis Fulgham﻿﻿ is officially a thing after a sterling 10/152/1 performance on 13 targets. But the Eagles' defense had no answers for ﻿﻿Ben Roethlisberger﻿﻿ or rookie Steelers wideout ﻿﻿Chase Claypool﻿﻿ (four TDs) in a 38-29 loss. Philadelphia showed heart in nearly rallying back from a 31-14 deficit in the second half, but there were too many mistakes, both by ﻿﻿Carson Wentz﻿﻿ (two more interceptions) and the defense, which had a number of ugly coverage breakdowns and a quiet day rushing the passer. Things don't get any easier this week against the 4-1 Ravens.

#JimmySays: Wentz's first INT was on a play in which his TE gave up on a route after he got checked past the five-yard contact area, and his second INT was a fourth down desperation heave late in regulation. I wouldn't put those in the "Carson Wentz is making too many mistakes" bucket, like some of his other games this season.

Whatever was wrong with Carson Wentz the first three games of the season, it’s not wrong anymore. He was fantastic in a losing effort in Pittsburgh—of his two interceptions one was a Hail Mary and the other was due to a blatant defensive penalty, he made a number of mind-blowing throws and worked magic to buy time late in the down, and he was within inches of completing two of the season’s best throws. And that was all with his only proven weapon, Zach Ertz, sleepwalking through the game (apparently Travis Fulgham will carry the receiving corps for a while). Jim Schwartz’s defense has a couple head-scratchers every week (especially that linebacking corps—yeesh), but it feels like it’s on the verge of clicking for the Eagles, and they’re only a half-game behind a Cowboys team that just lost its quarterback.

#JimmySays: 15th? On what planet is this a top half of the league team? Also, while I'll agree that Wentz was reasonably good in Pittsburgh, what are these "mind-blowing" throws that he made?

WR Travis Fulgham's breakout (10 catches, 152 yards, TD) was overshadowed by Chase Claypool's Sunday, but Philly might have something here.

The Philadelphia Eagles are a mess.

The good feelings about their first win of the season—which temporarily moved them into first place in the NFC Least—lasted until another sloppy, mistake-filled loss dropped them to 1-3-1 for the season.

There's no real light at the end of the tunnel for the Eagles, either. Playing in the woeful NFC East offers at least some reprieve, but over the next six games, Philly's out-of-division opponents have a combined record of 13-2.

It’s not a good sign that the NFC East is realistically a two-team race, one of the teams lost its quarterback and might have the worst defense in franchise history, and the Eagles still seem like the underdog to win the division.

#JimmySays: That is a depressingly true sentence.

Even at 1-3-1, they are far from out of the division race. They showed some fight in Pittsburgh.

#JimmySays: Meh. I'm not sure if that's good or bad. "They gave it their all" is fine, but they still lost by two scores.