Week 5 of the NFL regular season is in the books, and we have our first obituary of the season. That would be the Atlanta Falcons, who started 0-5, and have already fired their head coach and general manager.

Historic back-to-back choke jobs against the Cowboys and Bears Weeks 2 and 3 set the table for owner Arthur Blank to clean house, and a pair of non-competitive losses to the Packers and Panthers Weeks 4 and 5 sealed the fates of head coach Dan Quinn and GM Thomas Dmitroff.

The Falcons descent from near Super Bowl champions to mediocre team to "so bad that they fired everybody after 5 games" is sort of astounding.

• 2019: 1-7 start, but the head coach and GM get to keep their jobs yet again after a four-game winning streak to close the season provides more false hope. "Fool me once, strike one. Fool me twice, strike three." - Michael Scott's advice, unheeded by Blank.

Unfortunately for Falcons fans, they're not just bad. They're also the oldest team in the NFL, and years of awful drafting have put this team in a position in which they are not going to rebuild quickly. Atlanta is likely to be a doormat for years. 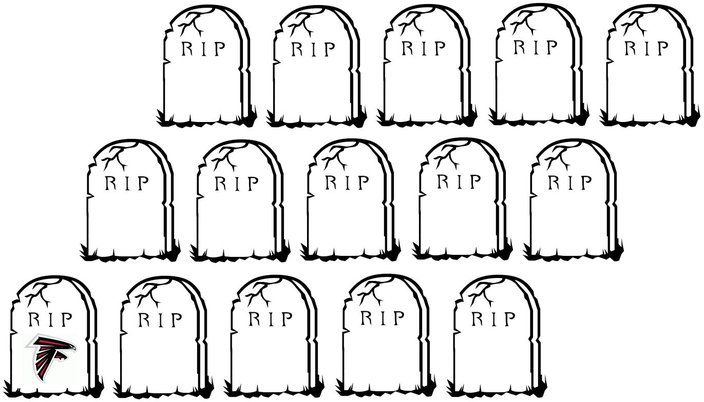 15) Giants (0-5): The Giants' record since the boat pic is now 12-42 (.222). They do have a chance to win a game soon though. They have the Kyle Allen-led Football Team this Sunday, and then the Eagles the following Thursday. 🤞

14) Football Team (1-4): How's the Dwayne Haskins benching working out? Well, the Football Team had 108 yards of total offense on Sunday, and they averaged 1.8 yards per pass, lol.

13) Lions (1-3): The Lions had a bye this week, so I'll exercise my right not to think of something to say about them.

12) Vikings (1-4):  Watching Sunday Night Football, I was shocked that Mike Zimmer went for it on 4 and 1 from the Seattle 6 yard line instead of kicking a short field goal to go up 8, even if I thought it was the right decision. Here's footage of Zimmer post-game, lamenting his decision to listen to analytics nerds.

10) Cowboys (2-3): Yes, Dak Prescott is done for the season, but can we talk some more about Dallas' trash defense?

The Giants haven't scored a TD since Week 1, and they put 34 points on the Cowboys, despite having two touchdowns nullified by penalties (one of which was a bad call). If not for those bailouts, they very likely would have lost, at home, to the worst team in the NFL.

9) 49ers (2-3): For the second straight week, the Niners benched their starting quarterback, in-game. In Week 4, as you saw against the Eagles, they pulled Nick Mullens in favor of C.J. Beathard. Week 5, Jimmy Garoppolo got the hook too against Miami, as they went back to Beathard.

Garoppolo had an NFL season low QBR of 1.4, throwing two ugly INTs along the way. The first one:

You could call fair catches on those.

8) Panthers (3-2): In our first edition of the hierarchy/obituary series this year, we had the Panthers in the 16 spot, assuming that they'd be really bad in a rebuilding year. Nope. They've been one of the biggest pleasant surprises of the 2020 season, with Teddy Bridgewater playing well, and Carolina rattling off three straight wins with Christian McCaffrey out.

7) Buccaneers (3-2): In the Bucs' loss to the Bears, Tom Brady didn't know it was fourth down, he threw an incomplete pass, and appeared confused as to why everyone on the field was heading toward the sidelines, holding up four fingers as if to say, "Hey wait guys, isn't it fourth down now?"

In the aftermath, Brady's social media team made light of the situation:

Congrats to my brother @KingJames on winning his 4th championship. Not bad for a washed up old guy! pic.twitter.com/mm0fylMbS7

Predictably, morons went, "Oh, that Tom Brady. He can laugh at himself. What a great guy."

No! Tom Brady is a sore loser. He proved as much when he didn't shake Nick Foles' hand after the Super Bowl, and then again when he ran off the field like a baby after Foles beat him again on Thursday night.

Looks like Foles was trying to find Brady for a handshake after the game pic.twitter.com/AZUp5Ksb3E

6) Cardinals (3-2): Just because it's fun, here are three wide receivers that were available to the Eagles that they passed on:

Hopkins, Metcalf, and Anderson are the three leading receivers in the NFL.

OK, so that's less about the Cardinals and more about the Eagles, but shut up.

5) Bears (4-1): Nick Foles is one of the most fascinating players in NFL history. In one moment, he can make a throw like this:

And then he'll lead a clutch drive for a win over Tom Brady, lol.

4) Saints (3-2): The Saints have had soul-crushing, gut punch playoff losses in each of the last three seasons. I look forward to them getting wrecked in the playoffs this year, because this just isn't the same dominant Saints offense.

2) Packers (4-0): Again, I'll exercise my right not to think of something to say about the Packers on their bye. No wait, I will say something here. Their bye comes at an absolutely awful time, seeing as (a) it's so early in the season, (b) they're healthy, and (c) they're rolling.

1) Seahawks (5-0): It feels like the Seahawks have more super close games than any team in the league. For example:

And they just find a way.