Week 6 NFL betting lines: Point spreads for every game, including Eagles vs. Ravens 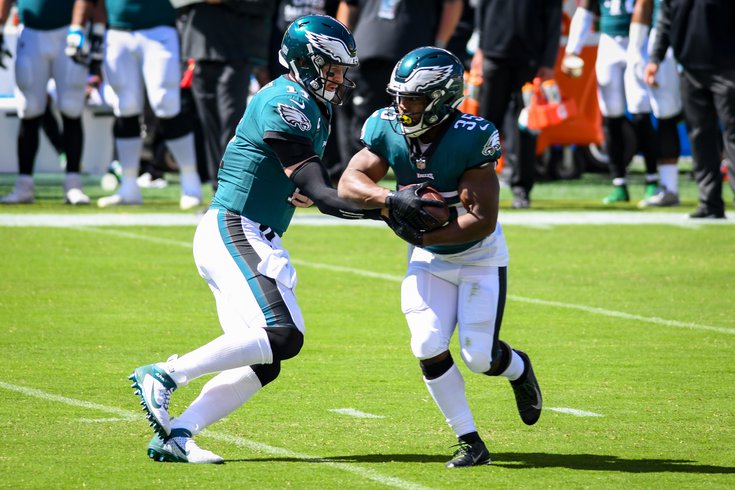 Carson Wentz (11) hands off the ball to Boston Scott (35) during the Philadelphia Eagles game against the Los Angeles Rams at Lincoln Financial Field.

As could have been expected (because the NFL did not seriously consider my solution to COVID scheduling), the NFL has some major issues as it tries to get every team a full 16-game season during a raging pandemic across the United States.

Lucky teams, like the Eagles who have not been effected, will have a regular week to prepare for their Week 6 opponent. Teams in the AFC who have either dealt with their own positive tests from players and coaches, like the Patriots and Titans — or their upcoming opponents — have seen a constant stream of re-scheduling and uncertainty.

The Titans are supposed to play the Bills on Tuesday. Which will, in turn, cause their scheduled Thursday night game to be moved to Sunday. This doesn't even account for the nearly dozen other games that have been moved due to COVID issues.

But, as we always do, we'll give you the odds for the games as if they're being played. All of the spreads you'll see below come from TheLines.com's consensus odds, and you can click over to see how they differ slightly at three different PA sports books — FanDuel, DraftKings and Bet Rivers — to decide where the best value is in Week 6.

There is no game currently scheduled. The Bills-Chiefs game was moved to next week on Monday night to give the Bills more time to prepare.

There is no line for this game, as the Titans have not played a game for quite some time. If they do play Tuesday as scheduled, this line should be determined then.

I guess oddsmakers were impressed with the Giants showing signs of life in their 3-point loss to the Cowboys Sunday. The Giants are 0-5, but are favored at home against the listless Washington Football Team, which could still start any of three quarterbacks in Week 6 (benched Dwayne Haskins, injured Kyle Allen, or backup Alex Smith).

Talk about signs of life. The Vikings were one bad decision (to go for it on fourth down in the red zone instead of kicking a field goal to go up 8) away from beating the Seahawks Sunday night. They will take on the lowly Falcons, who fired their head coach and GM and could be on the verge of a rebuild.

Well, isn't that interesting. The Bears, 4-1, are underdogs on the road in Carolina. Are the Panthers getting proper respect, as they have strung together three wins in a row? Was the sports betting world not impressed by Nick Foles once again besting Tom Brady on national television last week? This could work its way closer to a pick-em by Sunday.

In a battle between two one-win team, the Lions get the edge, despite both teams boasting decently productive offenses. Don't be surprised if there are a lot of points scored in this one.

The AFC North is clearly the best division in the AFC and has a solid argument as the best in all of football as three of four teams (including these two) are 4-1. Which team will emerge with the lead in the division after Week 6? The Steelers and Browns will each have their respective defenses tested against units on the other side that can potently move the ball and score.

The Eagles had a decent chance to win last week but a key missed (long) field goal and some shoddy defense down the stretch kept the Eagles with one win on the year. The Ravens have the best point differential in the league at +73 and are probably measurably better on both sides of the ball. An Eagles win would be a big upset.

The Packers will look to continue to make their case as the best team in football against Tom Brady and the underachieving Buccaneers in Week 6. Scoring more than 17 points against the Bucs in Week 6's only late afternoon game will give the Packers the most points scored in the NFL through five weeks.

This game looked better on paper at the beginning of the year, as the Niners have been decimated by injuries and are coming off back-to-back losses to the Eagles and Dolphins. The Rams appear to be the only realistic challengers to the Seahawks for the NFC West title.

This is the aforementioned Thursday night Week 6 game that was moved to give the Bills time to prepare. There is no line yet.

There is no line available yet for this regularly scheduled Monday Night Football game.