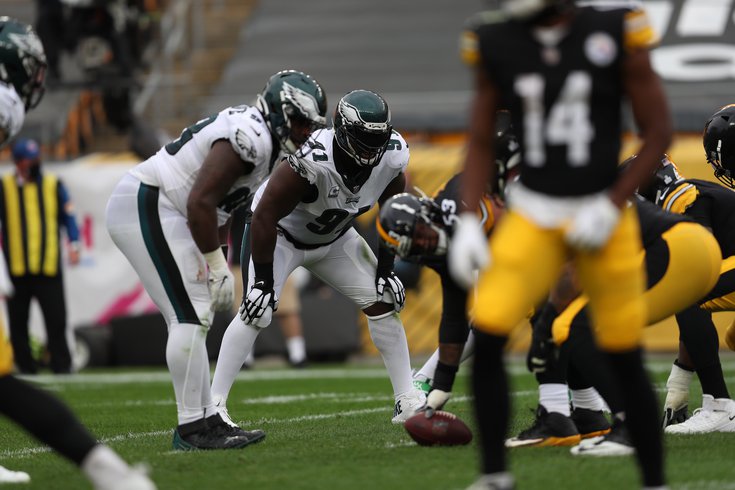 Eagles defense tackles Fletcher Cox and Hassan Ridgeway line up against the Steelers.

In the battle for Pennsylvania, the underdog Philadelphia Eagles fell short of a potential upset of the Steelers in Pittsburgh, 38-29, bringing their record to 1-3-1. As always, win or lose, we hand out 10 awards.

1) The 'Not Good Enough' Award: The Eagles' defense

Heading into this game, the clear mismatch that the Eagles were facing on paper was their offense against the Steelers' playmaking defense. As it turned out, the offense did its part, scoring four touchdowns, and instead the defense faltered.

Much like Week 2 against the Rams, the Eagles were out-schemed, outplayed, and they failed to make stops in crucial situations, as the Steelers converted 11 of 15 third down conversions (73 percent), and they held the ball for about nine and a half more minutes than the Eagles.

The Eagles' pass rush was quieted after a pair of dominant performances against the Bengals and 49ers, but the real issues are in the middle of the field and on the Eagles' back end.

2) The 'Not an NFL Linebacker' Nate Gerry

Facing a 3rd and 8 from the Eagles' 35 yard line, Gerry didn't even come close to covering the Steelers' Chase Claypool.

I feel like if you just took some random high school linebacker and put him on the field, that is what it would look like. Gerry has had a brutal season to date, and it only got worse in Pittsburgh.

3) The 'Uh, Why Was Gerry Even Put In That Situation In the First Place' Award: Jim Schwartz

On the day, Chase Claypool, the player roasting Gerry above, had 7 catches for 110 yards and 3 TDs (plus a fourth TD on the ground), and should have had more if not for an awful offensive pass interference call against him. It's dumbfounding that the Eagles could be in a defensive call there that required Gerry to cover that guy. How does that happen when any common fan can see Gerry getting torched like he's picking daisies every single week? 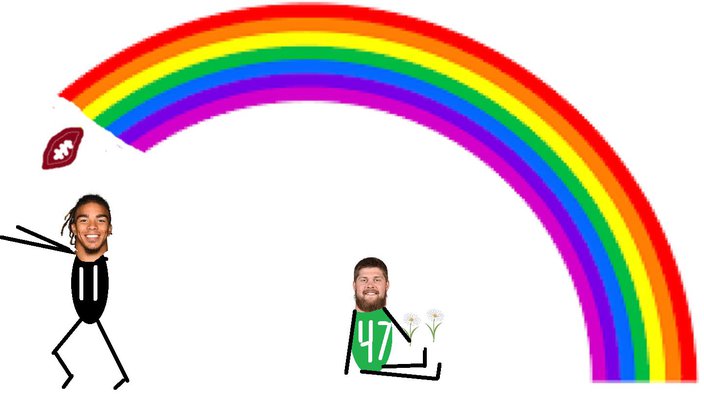 In addition to anything opposing offenses throw Gerry's way, the Eagles' defense has been unable to stop running plays to wide receivers and tight ends. In fact, heading into this matchup, the Eagles have allowed 93 yards and 2 TDs on running plays to either receivers or tight ends, and they gave up another big play on one today to Ray Ray McCloud as well as one to the aforementioned Claypool.

Ray Ray McCloud shows off his speed on the reverse for a 58 yard gain. #ClemsonNFL #HereWeGo

They've been killed by over-pursuit by their linebackers and backside defensive ends all season, and there doesn't seem to be any correction to it.

Despite the loss, there were positives in this game, and the most obvious cause for encouragement came in the form of Travis Fulgham, who had 10 catches for 152 yards and a TD, and looked like a legitimate NFL wide receiver. Fulgham had as many catches against the Steelers as J.J. Arcega-Whiteside has had all season, and Carson Wentz looked confident throwing the ball his way.

Of course, this performance comes a week after he made the biggest play of the game in the Eagles' win over the 49ers. They may have something there.

After Arcega-Whiteside made a 37-yard catch (and it was a nice catch!) on what turned out to be the final play of the first half, Arcega-Whiteside jumped for joy. YAY! Of course, the clock continued to tick down to all zeroes, ending the Eagles' chances for getting points on that drive.

To be clear, there was no way the Eagles were getting another play off anyway, but it's sort of indicative of the extremely minimal impact JJAW has had for this team, despite being a second-round pick, in that his lone positive receiving play on the season was actually worse than if he had just dropped it. And he celebrated it! Lol.

He did have a nice block on Miles Sanders' 74-yard TD run, though. So there's that.

Maybe Ertz's unhappiness with his contract is messing with his play on the field, or maybe he's just declining, but let's be honest -- whatever it is, he just doesn't look the same.

8) The 'Making Due' Award: Carson Wentz

Wentz has had a rough start to the season, to put it mildly, but his play wasn't bad in Pittsburgh, as he led four touchdown drives, despite his No. 1 receiver being Travis Fulgham, and his offensive line looking like so, after Lane Johnson was carted off:

A meaningless INT at the end of regulation didn't help Wentz's numbers, but he looked more like the guy who dragged a corpse of an offense to the playoffs last year than the mistake-prone, inaccurate guy we saw the first quarter of the season. And he was playing against arguably a top 5 defense. So that's encouraging, maybe?

9) The 'Speaking of Corpses' Award: The Eagles' injuries

Earlier in the week, the Eagles had 15(!!!) players either on IR or the PUP list, in addition to three more starters not on IR, but who were ruled out with injuries. And these aren't just insignificant scrubs. It's crazy that it wasn't mentioned until our eighth award that Lane Johnson, the second-most important player on the team, was carted off. By now, we're just so conditioned to expect it.

As of this writing, the Giants are leading the Cowboys 20-17. The Cowboys are still probably going to win that game, and if they do, that would mean that the Eagles would no longer hold sole possession of first place in the NFC East. But certainly, that Cowboys team isn't good.

The NFC East is currently 3-14-1. Barring a tie between the Giants and Cowboys, it'll be 4-15-1 when the day is over. Even after the Eagles (probably) lose to the Ravens next Sunday, they'll still be in it, perhaps to their own detriment. Here's a look at their current odds to win the division, via TheLines.com.