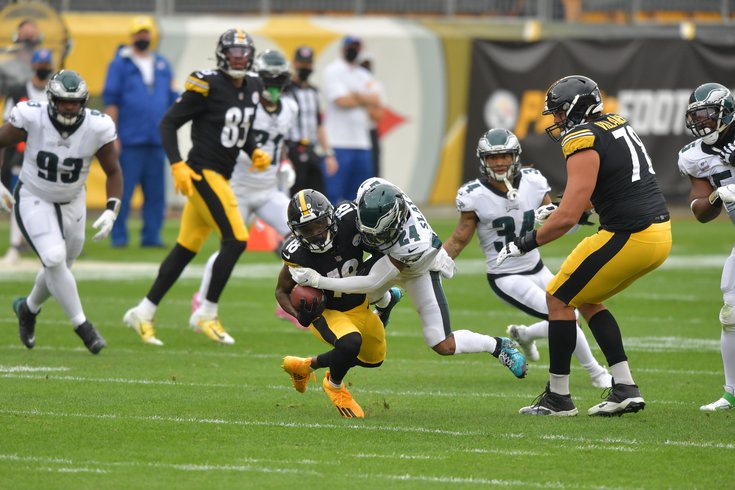 The Eagles defense let the team down in a few key spots in Week 5.

The Eagles hung around against the Steelers for most of Sunday afternoon, but a miserable defensive performance on third down ultimately spelled doom in a 38-29 loss to Pittsburgh.

• Travis Fulgham may be the only positive thing to come from the last few injury-riddled weeks of Eagles football. Thrust onto the gameday roster last week, he followed up his game-changing touchdown against the 49ers with a comprehensive performance against the Steelers, making plays in every area of the field, catching balls underneath, over the top, open down the sideline, and contested in traffic. I can't imagine he's going to sustain this long-term, but at the very least he deserves a shot to sick moving forward.

Fulgham has made an impact by simply doing the things NFL-caliber receivers are expected to do, an admittedly low bar Eagles wideouts have had trouble clearing for years now. So much of the conversation centers around Carson Wentz's misses every week, often rightfully so, when the truth is his guys are inept at creating separation or finding soft spots in the defense. Just having a guy who can get open and reliably catch the ball is a gamechanger.

Thankfully, Fulgham has done a heck of a lot more than that. He had 135 yards on eight catches in the first three quarters alone, absolutely killing Pittsburgh all day. He punctuated it with a huge touchdown early in the fourth quarter, sitting down in the middle of the field for his easiest catch of the day.

Someone else is going to be out of a job soon if the Eagles are basing the decision on merit alone. Fulgham has offered more in two weeks than JJ Arcega-Whiteside might produce in two more full seasons.

• The Eagles looked dead in the water after a Wentz's turnover early in the second half, down three scores and drowning against a very good Steelers team. Wentz deserves credit for both his overall performance and the job he did pulling the Eagles off of the canvas, not allowing the offense to fold in spite of some frustrating mistakes in big spots.

This is the Wentz a lot of people were hoping for coming into the season, finally fully healthy and with an improved mental approach to boot. Though there have still been a few bad sacks in recent weeks, Wentz is using his legs in expert fashion this year, picking up chunk yards and avoiding pressure without exposing himself to much extra damage from tacklers.

His accuracy has been the big issue, and Wentz looked a heck of a lot better against the Steelers on that front. If not for a couple flubs from his receivers, including a huge whiff from John Hightower on a potential touchdown in the first half, this could have been a monster Wentz game. As it stands, he still executed at a high level, using touch to find Greg Ward for his first touchdown of the day.

If they get more of this Wentz, they're not the hopeless case they looked to be two weeks ago. Maybe having one guy who can constantly get open on the outside is all he needed.

• Great challenge by Doug Pederson to wipe out what would have otherwise been a long completion down the sideline to Chase Claypool in the third quarter. Replay made it a pretty easy call, but that's a much tougher one to get right in real-time.

• Jalen Hurts threw a nice strike on his lone play/throw of the game, and the Eagles used him as an effective decoy on a huge third-down play late in the game, with Wentz punching it up the middle as Hurts drew attention with pre-snap motion. Not quite as satisfying as a second-round pick who plays most downs on either side of the ball, but they're starting to bring the kid along.

• The early-down defense for Philadelphia was mostly good, bordering on excellent in Sunday's game. Their third-down defense was an absolute abomination, and it was what ultimately led to the Eagles being in a dogfight for most of the game.

Pittsburgh tried valiantly to get things going on the ground through James Conner, but Philadelphia's front seven (and mostly the front four) did an excellent job of bottling Conner up and forcing the Steelers into third-and-long plays. Unfortunately, things absolutely fell apart from there. Missed tackles on third down, including a huge one from Cre'Von LeBlanc early in the second half, often led to big plays for Pittsburgh immediately after the conversion.

No third-down play loomed larger than the throw right down the middle to Claypool in the final minutes, with the rookie wideout waltzing into the endzone to kill off the game:

On that last one, it's just a matter of knowing your personnel. You have watched Claypool kill you all freaking day, and your solution on the biggest play of the game is to stick Nate Gerry on him? The same Nate Gerry who is consistently one of your worst players on either side of the ball week-to-week? Come on, dude. It's a textbook example of a plan that never had a chance to work in the first place, which makes it even more infuriating to watch the obvious outcome play out.

Discipline has been an issue throughout the season, with the Eagles getting tricked by obvious fakes and misdirection that you'd think they would prepare for on tape. This group has its strengths and good players, but it is not very good on the whole. And on top of all of that, they are being led by a guy who doesn't seem to understand how to make use of what he has. It's a mess.

• There are a ton of excuses for the Eagles on offense this season. The wide receivers are young and bad, the offensive line is banged up, and their dynamic running back doesn't get much of a chance to get going because of those problems.

No such excuse for the Wentz/Zach Ertz connection, which has been one of the few consistent positives for the Eagles in recent years. They can't seem to get on the same page, and rather than pointing the finger at one of them, I tend to think you have to put it on both of them. On a couple of key plays, including Wentz's big interception early in the second half, Ertz had his route altered by contact and basically gave up on the play:

They started this play wit.
Now they are witout.

That doesn't excuse Wentz throwing it right into the arms of a Steelers defender, or his cavalcade of misses on deep shots to Eagles receivers. But when you throw the ball to the place your guy is supposed to go and he completely gives up on the route, it makes the throw/decision look a lot worse than it actually is.

Sprinkle some more blame on the coaching staff while we're at it. It's one thing for an offense with lots of new pieces to struggle on the chemistry front. When you make a good connection worse? That means you've been tinkering where you shouldn't have, making change for the sake of it instead of on merit. Can't say whether it's Pederson or one of the 300 assistants they have trying to steer the offense at this point, but they tried to fix something that wasn't broken.

• Enough of Jalen Mills at cornerback. Perhaps it could get worse with some of the depth options having to fill those shoes, but stop serving us the same slop and pretending it's something different.

• Hard to pin the loss on a guy for barely missing a field goal from 57 yards out, even if that's what Jake Elliott is paid to do, so it was a bummer to see him miss late. If Pederson was content settling for a field goal attempt, that's defensible, but that means you should be setting it up with a run attempt on the prior down and trying to inch forward any way you can. If anything, third-down runs were the best time for Philly to put it on the ground all day, so it made it even worse that they didn't do so in the game's biggest moment.

Pederson just doesn't seem to be in sync with the game from moment-to-moment this season. The offense puts together decent enough stretches, but there doesn't appear to be a lot of underlying strategy to most of his big decisions, leading to a lot of second-guessing from the press box and your seats at home.

A small thing that doesn't really matter but is emblematic of the above claim — what the hell is Pederson doing calling play action on 4th and 20 with just over two minutes to play? What Steelers player is going to bite on that? How is that helping you try to put together a last-minute comeback? Again, like the Gerry-on-Claypool play, it's the sort of thing that seems dumb from the start and led to Wentz being pushed out of the pocket almost immediately, resulting in the interception that ultimately ended the game.

• The officiating in this game was pretty pitiful. Bad pass interference calls, missed holding calls, some weird delays between plays where they seemed to lose their sense of the clock. As bad as the Darius Slay call was in the first half, the offensive pass interference they called on Claypool was arguably as bad in the guts of the game, and the Eagles capitalized on that shortly afterward. And the worst call of the day might have been the initial ruling on the "interception" that was overturned in the final minutes.

Guess the refs needed the preseason more than the players did.

(I complained about it in the first half, so I want to reiterate this again — the absence of replays for several critical penalties throughout the game was mind-boggling on Fox's end. They didn't have the excuse of ad breaks to fall back on, either. Show replays instead of some worthless graphic no one cares about.)

I hope he tackles me like this when he gets home 😂😂😂😂 jk https://t.co/qF71hKWeBc

Nothing wrong with this, of course, but I'm throwing a flag on the play.

• Am I crazy or does Ertz's body language look absolutely terrible on 75 percent of the plays he's involved in?