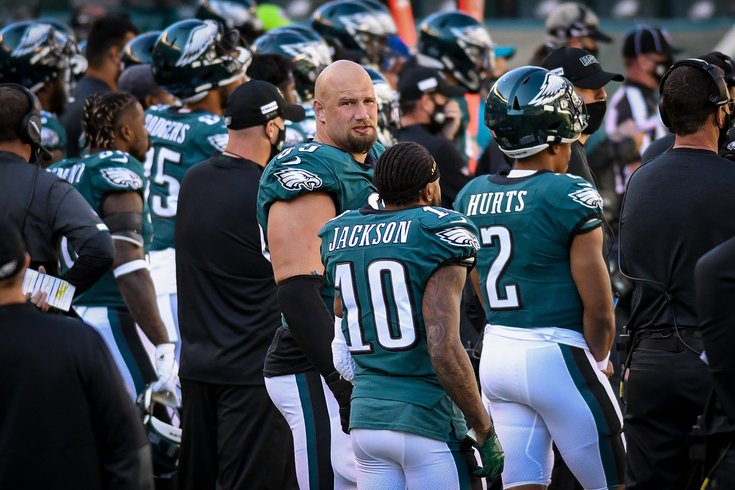 Lane Johnson will play Sunday against the Steelers. DeSean Jackson will not.

After four games in the 2020 NFL season, the Eagles have 15 13 players either on injured reserve or the PUP list. The Steelers? Two. They also only had two players on their final Friday injury report, and neither player was of any real consequence.

Here are the Eagles' and Steelers' inactives.

• WR DeSean Jackson: It took just two and a half games for Jackson to go down with an injury. He injured his hamstring during the second quarter of the Eagles' tie with the Bengals, and he did not return. The Eagles' decision not to address the wide receiver position in free agency, instead relying on Jackson to stay healthy, didn't make sense then, and it was easily predictable that Jackson is already missing time.

• WR Alshon Jeffery (illness): Doug Pederson said the team was hoping Alshon Jeffery could get practice reps this week, but a non-COVID illness prevented that, so he'll be out this Sunday.

To note, if the Eagles had kept Jeffery on the PUP list to start the regular season, he would have been out the first six weeks, at which point he could have been activated for Week 7. As is, he is occupying a roster spot without playing for a minimum of five weeks by not remaining on PUP.

• CB Avonte Maddox: Maddox was unable to return to the game after suffering an ankle injury against the Bengals. He'll likely be out for a while. He was replaced initially by Trevor Williams, who is now on IR, and more recently by corner-turned-safety-turned-corner Jalen Mills.

• DE Casey Toohill: With Genard Avery's semi-breakout performance on Sunday, Toohill will likely be inactive for a while.

• TE Hakeem Butler: Butler is still trying to convert from WR to TE. In the meantime, the Eagles activated Jason Croom from the practice squad.

• S Will Parks (short-term IR): Parks' injury has been a significant one. He is the Eagles' third safety, but he was poised to play a much bigger role than that in 2020. Throughout training camp, Parks was sharing time with Nickell Robey-Coleman in a nickel role. Robey-Coleman was the regular nickel, with Parks serving as the "big nickel." Robey-Coleman has not played well so far, and was benched Week 3 in favor of Cre'Von LeBlanc.

• DE Vinny Curry (short-term IR): In Week 1, Curry started, and had 3 tackles and a half sack on 22 snaps. He had to be helped to the locker room after injuring his hamstring. He should be out a while.

• CB Trevor Williams (short-term IR): Williams filled in at corner after James and Maddox went down. After Williams was lost for multiple weeks as well, the team moved Mills back to corner.

• S Rudy Ford: Special teamer only, but has been playing well this season in his role.

• RT Zach Banner: Banner beat out Chukwuma Okorafor for the Steelers' starting RT job in training camp, but then injured his knee Week 1, and is done for the season. We noted Okorafor vs. Brandon Graham and Genard Avery in our five matchups to watch.

• iOL Stefen Wisniewski: You guys remember Wis, right? He's a versatile backup now for the Steelers who started Week 1 in place of David DeCastro. Wis is out with a pectoral injury.