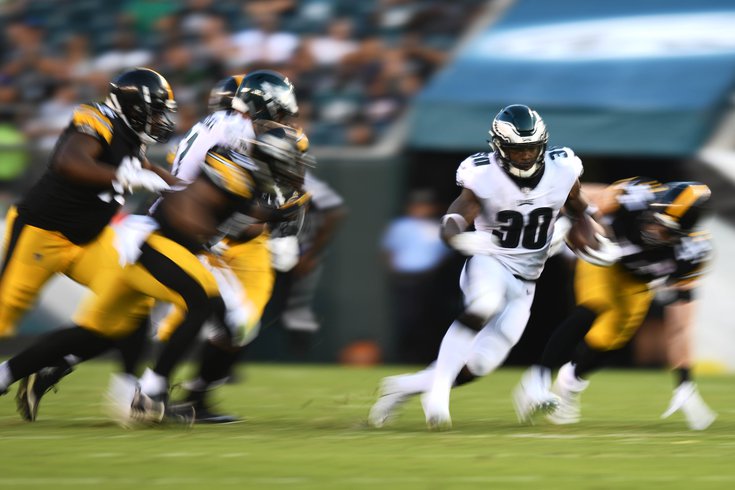 Philadelphia Eagles running back Corey Clement carries the ball against the Pittsburgh Steelers.

First, let's just say we really hope you're not using our staff predictions to make any bets this season, because we're basically the NFC East of prognosticators. In fact, we're actually worse.

So far, through four games, our seven writers have been correct a whopping two times this season. Two. The second loneliest number. We generously gave ourselves ties after the Bengals game (since no one predicts ties), but if we're being honest with ourselves, we all picked up losses that week. And if you count those as losses, we're — oh, god I shudder just writing this — 2-26 picking Eagles games this season.

And yes, that's straight up, not against the spread.

Last week was the second time all season that our writers were as unanimous in their picks as we were wrong about the outcome, with all seven of us picking an Eagles loss. The same thing happened in the opener, when we each wrongly predicted the Eagles would beat Washington. (And, of course, our picks weren't unanimous for the Bengals game, but we were all wrong nonetheless.)

This week, however, we're not unanimous in our predictions, meaning we'll have at least three combined wins no matter the outcome of the game. Hey, you've gotta start somewhere.

As we do every week, let's take a look our predictions for Sunday's cross-state battle between the Eagles and Steelers, as well as all the latest lines from local sports books, courtesy of TheLines.com, and how Philly fans can tune into the action.

The Eagles pulled off what was no doubt a very relieving win in Northern California last Sunday, but the reality is that a few bad turnovers by the Niners aside, they still clearly got outplayed.

Heading into Pittsburgh this Sunday, the Eagles will face a well-rested Steelers team that did not play Week 4, as their matchup with the Titans was postponed. This matchup reminds me a bit of the Week 1 Football Team matchup, in that the Steelers have a deep and talented stable of pass rushers, led by T.J. Watt, Bud Dupree, and Cameron Heyward.

Meanwhile, the Eagles are down starting LT Andre Dillard, LG Isaac Seumalo, RG Brandon Brooks, and replacement LT Jason Peters. Additionally, RT Lane Johnson is playing hurt. Yes, Jordan Mailata filled in and played well against the Niners on Sunday, but I'm not going to overthink this one. The Steelers' pass rush vs. the Eagles' injury-decimated offensive line is a huge mismatch.

You would think that having a job covering the Eagles would provide me with some kind of insight into what the team will look like each week. But alas, I have none. I am 0-4 (technically 0-3-1) picking this season, which is the same number of wins as Jimmy Kempski has NFL completions. Not impressive.

So, I find myself in a win-win position. I am picking the Eagles this week. They have momentum, they are a little healthier, more confident and they have a chance to keep first in the NFC East. Steelers quarterback Ben Roethlisberger complained that the team’s surprise COVID bye week last week really only gave players three days off and then they had to quickly swap to preparing for the Eagles. I am going to go out on a limb and say there are going to be lingering effects, rust and mistakes made by the Steelers.

If I get this right, I have my first correct pick of the year. If I am wrong, my almost as impressive 0-5 record will carry on to next week. Win-win.

I'm going to be honest here. I underwent surgery earlier this week — I'm totally fine, thanks for asking — so I haven't paid a lick of attention to the Eagles or the sports world in general the last few days, but I need to make a pick here and am definitely not preemptively making excuses. I mean, given my track record so far this season, you're probably anxious to see my pick before you throw down any money on this game. So here goes...

The Steelers had their schedule altered due to the Titans' COVID outbreak, sure, and Big Ben can complain about that messing with the team's rhythm all he wants, but it essentially gave the Steelers a bye week to prepare for an undermanned Eagles team that seems to find new injuries every day. The win over the 49ers brought a nice feeling that's been missing from the Delaware Valley this fall, but I don't expect it to keep up this weekend with the Birds traveling across the state to Pittsburgh to face a Steelers team that already presented a tough matchup before losing almost their entire offensive line to injury, as well as several other key players.

The Birds defense has actually been playing pretty well the last two weeks, but that was against a rookie and a backup QB, and Roethlisberger is certainly not that. Still, perhaps they can carry some momentum over from their three-turnover performance last week and continue to bring the pressure at the quarterback, something they've actually been quite good at this season. This Steelers offense is good, but isn't what it once was, and the Eagles should be able to keep this game within reach even if their offense struggles against a stout Pittsburgh defense. Unfortunately for Philly fans, it's not going to be enough.

Oh, and you're probably also wondering how the Eagles finish with 18 points. Simple: Doug goes for two early in the game like he did last week against the 49ers, but this time fails. And after two successful field goal attempts, the Eagles find themselves down 23-12 late in the game. They score a touchdown and again try for two, this time in an effort to make it a three-point game, but they (again) come up short. Why am I getting so specific? Well, look at my record. Maybe I get one of these smaller things right and then don't feel so bad about myself when the Eagles inevitably wind up winning this game.

That win last week was anything but convincing. The offense still sputtered for long stretches of the game, and things still got a little dicey in the end despite San Fran’s rash of injuries and horrible QB play. With Pittsburgh having extra time to rest and prepare, I’m not seeing a good case for the Eagles.

Reality returns. I realize Eagles' fans feel Travis Fulgham may be the next coming of Jerry Rice, and I know Fulgham can't be stopped, but I do think the Steelers can contain him. The Steelers are well rested and the Eagles may be feeling that they're better than they are after beating the limping 49ers and the woeful Nick Mullens.

Pittsburgh is not beat up. Carson Wentz has seemed to find a rhythm, but who will keep T.J. Watt, Devin Bush Jr. and Bud Dupree off of him? Just through three games, the Steelers have 15 sacks and four interceptions. Ben Roethlisberger still has a little something left. He doesn't make mistakes, and he's good at getting rid of the ball when he does sense trouble.

MORE: Eytan Shander: Are the Eagles bad, or just injured?

I do not believe the Eagles win this football game, but I’ve been wrong pretty much every week. The Eagles will cover this game, I do feel confident in that. The problem remains with Lane Johnson and the health of the offensive line. So many injuries… meanwhile the Steelers had SO much time off, Big “Neck” Ben is already complaining. His teammates may play really well just to shut him up.

Do you believe Carson Wentz turned some corner because he beat the Niners despite not throwing for 200 yards? If you do, bet the Eagles on the ML. I am taking the points.

At 3-0 and future Hall of Fame quarterback Ben Roethlisberger back after an essentially lost 2019 season, the Pittsburgh Steelers may seem like a daunting next hurdle for their Keystone State rivals, the Eagles.

The first layer of that 3-0 onion, however, reveals opponents with a combined 1-11 record in the New York Giants, Denver Broncos, and Houston Texans, who just fired head coach and general manager Bill O'Brien. The cliche is you can only play who is in front of you and Mike Tomlin's team deserves credit for taking care of business when it should but we would also probably have a better handle on the Steelers if a COVID-19 outbreak hadn't spread through the Tennessee organization forcing a postponement of the scheduled Week 4 game against the unbeaten Titans.

Instead, Pittsburgh effectively got an unscheduled bye week and extra time for its coaching staff to prepare for the Eagles' cross-state trip in front of about 5,500 fans, the first NFL game in Pennsylvania with fans allowed since Governor Tom Wolf eased COVID restrictions. That part of the equation is unlikely to impact anyone outside the television reporters searching for empty sound bytes, however.

Issue No. 1 for the Eagles will be blocking the Steelers' impressive front, which includes a top-tier interior player in Cameron Heyward as well as two impact edge rushers in T.J. Watt and Bud Dupree. It will be a much tougher test for Jordan Mailata, who held up well in his first NFL start against San Francisco last week.

Ultimately the Steelers probably aren't scaring Kansas City at the top of the AFC and are likely not as good as Baltimore in their own division. However, it's a good team, expecting another cocktail of Cre'Von LeBlanc, Travis Fulgham, and Alex Singleton to put you over the top isn't going to be a recipe for success.