John McMullen: Eagles finally have a true identity, and it's their defensive line 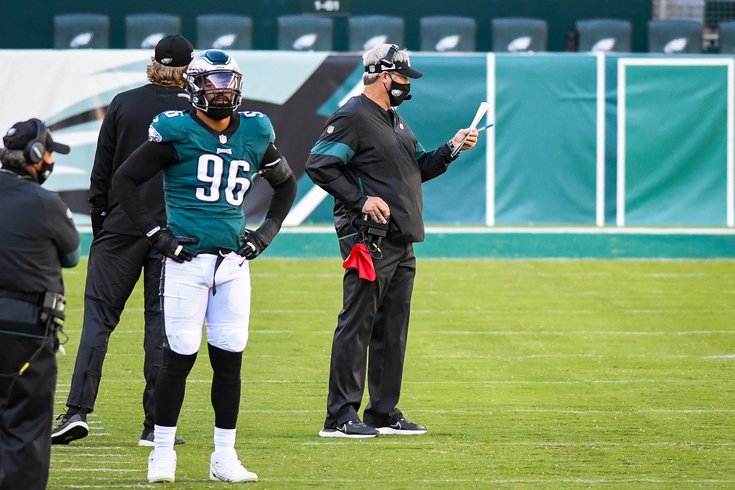 Derek Barnett and Doug Pederson on the field during the Philadelphia Eagles game against the L.A. Rams.

Most were hoping the Eagles' identity for 2020 would rest on the offensive side of the football for the obvious reasons: the offensive-minded head coach with a supposed-elite quarterback in Carson Wentz throwing to a re-made receiving corps that could field a respectable 4x100-meter relay team whenever the Tokyo Olympics is actually pulled off.

Instead, Wentz has suffered through a precarious regression through the first quarter of the season and that obsession with speed on the outside has been like most things in 2020 roadkill in the path of COVID-19, with the actual Olympian (Marquise Goodwin) opting out before things had even gotten started and DeSean Jackson, Jalen Reagor and Quez Watkins being hampered with injuries when the starting gun fired.

Philadelphia has finally developed an identity, however, with the defensive line taking center stage over the past two weeks.


Entering Pittsburgh on Sunday, Jim Schwartz's "engine" now leads the NFL in sacks with 17, 13 of which have been collected over the past two games when the losing stopped. Moreover, Philadelphia has hit Joe Burrow, Nick Mullens, and C.J. Beathard a combined 33 times over that span.

The final piece to a deep and talented puzzle was put into place with the health of Derek Barnett on the outside and Javon Hargrave on the interior.

"Once we got healthy on the D-Line and got Derek Barnett back and got Hargrave back, I think you really saw a big jump from those guys, just production-wise," Schwartz explained.

Add that to the development of some younger players on the edge in Josh Sweat and Genard Avery as well as inside with Hassan Ridgeway and Schwartz is comfortable going eight deep, enabling him to keep the foundational pieces like Fletcher Cox, Brandon Graham, and Malik Jackson fresh for high-leverage snaps late in games.

"I mean it’s just believing in each other and every guy taking the coaching," Cox said. "You’re seeing guys just showing up because in that room, everybody has their role. Everybody just takes their role and they just roll with it, whatever it is. I think that’s the biggest thing, everybody just taking advantage of every opportunity to get to go out on the field and play, and it’s showing on tape that guys go out there, they know they have a role and it’s an opportunity for them to get out and just showcase what they’ve been working on during the week.

"And guys like Genard and Josh and Hasaan, everybody’s just been showing up which is really great."

That sentiment will only be bolstered in the coming weeks with the most versatile reserve in Vinny Curry. The Eagles started the 21-day clock on Curry's return from a hamstring injury suffered in Week 1 on Wednesday before practice.

"Just in general, with that whole group we feel pretty strong about the mix of guys we have and, and part of our big-picture philosophy, even for the tackles, you know, is just keeping those guys fresh," defensive line coach Matt Burke said. "... we really try to roll groups, and the way that Jim wants us to play as a front requires us playing at a high level of energy and exertion. So, we really try to limit guys playing 80 snaps in a game because I don't think that they can play the way we asked him to play."

The snap counts against San Francisco were the first time the plan was able to be implemented the way the coaching staff wants. Inside Cox, who has been fighting through an oblique injury, played 50 of 73 defensive reps (68%) followed by Hargrave with 42, Jackson with 41 and Ridgeway notching 23. Outside Graham led the way with 56 (77%), and Barnett was next with a season-high 43 as he continues to get right from his hamstring issue plus Sweat with 27 and Avery with 16.

The undersized Avery generated an amazing five QB hits in his limited opportunities, an amazing pressure percentage of just under 33%.

"That was sort of the breakout game we've been waiting for from him," Schwartz said of Avery. "He's always been a skilled pass rusher. It's just fitting him in with all the other stuff. I think he's really done a good job of refining his technique and limiting his -- sticking with what works best for him.”

From there Schwartz again harped on the ability to keep the linemen fresh for late-game situations.

"[Avery] was fresh when he came off the bench, which is a big thing for our guys that are coming off the bench, and he gave us that changeup and made some big plays for us in the game," he said.

Jackson, meanwhile, has been excellent after missing all but one game last season with a Lisfranc injury.

"We missed [Jackson] last year, he only played one game for us, or three-quarters of one game,” said Schwartz. “Came back. He's not only played well on the field. He's been an outstanding leader for us. He's got a great tempo on game days. He's a really smart player. He's a veteran player and he's a hard matchup. He's a different kind of matchup for the guards.”

At 6-foot-5, Jackson is rangy, almost like a five-technique DE who creates fits for interior O-Linemen used to far different skill sets in pass protection.

“He's really good, and it's a tough matchup for some of those guards," Schwartz explained. "He's also played with just great tempo. You see him chasing plays down. I think we've seen that from all our D-Linemen, but Malik, Fletch, and Barnett really stand out that way, making tackles on run plays down the field. Barnett made a couple plays on passes down the field. That's the kind of effort we expect from our guys, too, and Malik has led the way that way.”

The engine is now humming along nicely with that added title of identity for an organization.

"The guys have been playing hard," Burke noted. "I think it's always our message to the guys about creating opportunities and whether it's stopping the run to get us in a position where the other team's passing or you’re always getting off the ball continuously."

By doing that the Philadelphia D-Line is also buying time in a moribund NFC East for Pederson, Wentz, and Co. to at least figure some things out.