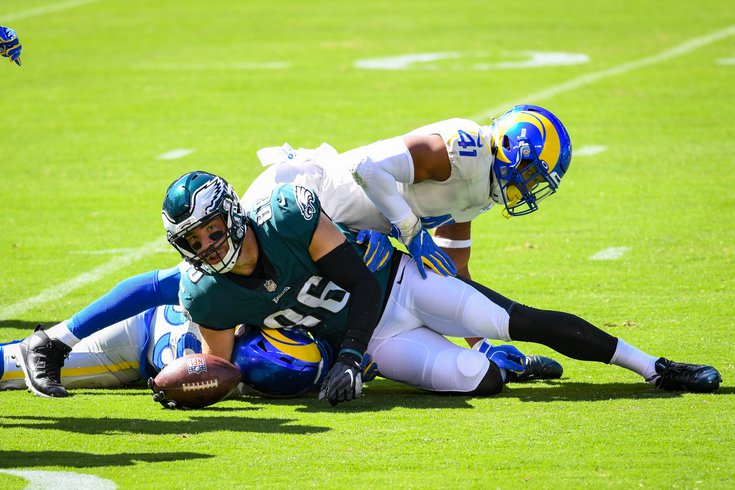 Zach Ertz gets tackled during the Philadelphia Eagles game against the LA Rams at Lincoln Financial Field in Philadelphia on September 20, 2020.

Out of context, the Eagles being 1-2-1 through four games would suggest that, you know, no one would be interested in betting on them to win, well, anything.

But within the context of the dumpster fire that is the NFC East, the Eagles are very much alive to make the playoffs, if they can seize the momentum from their unexpected Week 4 win in San Francisco. The Steelers are their next opponent and one that will be well-rested after an equally unexpected bye week, thanks to a slew of positive COVID-19 tests from their scheduled opponent the Titans.

The Eagles will be looking for their second win of the season in their first inter-conference game of the season.

They are still, somehow, very much alive in the division even it (as Matt Mullin eloquently put it last week) they "stink like a rotting corpse out on the field."

So, since it's too early to call it a wrap on the 2020 season, let's take a look at the latest future odds and player props from TheLines.com, from postseason chances to award winners and season stats as we turn the page to the Eagles' upcoming matchup with the Steelers, a game in which the Birds are currently seven-point underdogs.

Really all you need to know for this section is that the NFC East is a combined 3-12-1. That ridiculous tie Doug Pederson settled for two weeks ago, well, it actually might pay off.

After starting the week with +290 odds to win the division, the Cowboys lost in a shootout to the Browns and Washington fell at the hands of the Ravens (we won't waste your time on the winless Giants) making Philly the only division winners in Week 4. According to TheLines.com, FanDuel now has them at +140.

At the beginning of the year, we had Carson Wentz's MVP odds listed here and it was a reasonable expectation that he would at least stay in the race for a large part of the regular season. After three weeks, his chances of winning the award plummeted to +8000 according to FanDuel. Since then, after a much better performance in Week 4, he's moved up just a bit to +6000, still incredibly long odds that no one in their right mind would toss money on — especially as he's both struggled to protect the football and has almost no one to throw to.

[Note: For comparative purposes on the percentages, the Eagles are currently 25% of the way through their season, so if a player is above that, they're on pace to exceed their total.]

Sanders missed Week 1 with an injury and is close to getting on the exact right pace to reach our number. He had just 13 carries in last week's win. Hopefully — for his and the Eagles sake — he gets more touches against Pittsburgh.

All Wentz really had to do to decimate the over was stay healthy, and throw around two touchdowns per game. He is obviously not doing that, and has seven interceptions (his entire total in each of the last three seasons) on top of things. He could really use a strong, 2017-like performance next week. Throwing three would get him back on a reasonable pace.

Ertz still has just one touchdown on the season, which he caught in the opener against Washington. But with such a low projected total, catching one against the Steelers will have him suddenly looking good again.

According to TheLines.com, FanDuel has actually dropped the Eagles' projected win total to 6.5 after their 1-2-1 start. Yuck.