Carson Wentz's bad luck with receivers is kind of ridiculous 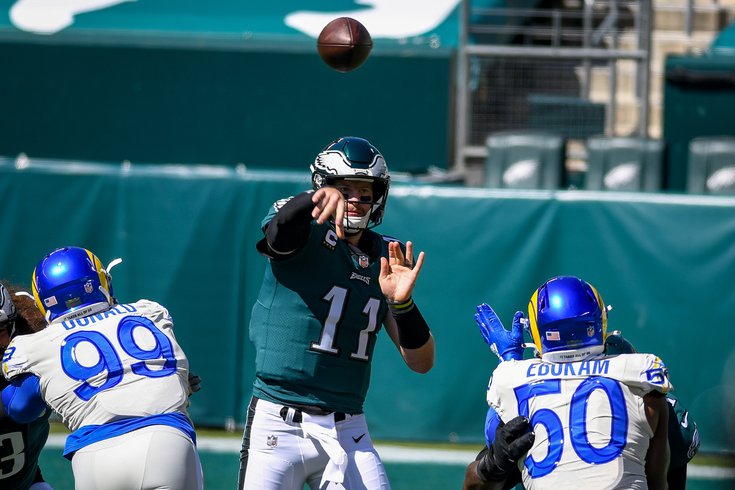 There is no excuse for Carson Wentz's sudden drop-off in play.

He's a highly-paid franchise quarterback with a reasonably good track record, who has had the same head coach and scheme his entire career and has an organization around him that wants to win.

But maybe that's not enough. Maybe circumstances beyond his control have been thwarting what could be a much better career for the North Dakota product.

Everyone knows that a true superstar, one like Tom Brady or Aaron Rodgers, has the ability to win with pretty much anyone on the field with him. Brady has done more with less than maybe any quarterback in NFL history, and Rodgers is making Allen Lazard and Marquez Valdes-Scantling into serviceable fantasy football players.

Wentz might not quite be that caliber of performer. And while we are by no means giving him a pass or making excuses for his poor play in the season's first three games, there is a pattern of awful receivers that is at least worth acknowledging at this stage of his career.

If DeSean Jackson (hamstring), Alshon Jeffery (still working back from foot surgery), Jalen Reagor (thumb injury) all miss Sunday's game against the 49ers as expected — not even mentioning the hole left in the absence of Dallas Goedert — Wentz will have, let's call it little by way of reliable receiving in Week 4.

Here's their projected top three for Sunday in San Francisco:

If it has a familiar feel, that's because Wentz has been here before.

We'll give the numbers on the table some context. Zach Ertz, by himself, caught 88 passes in 2019. Jackson, all by himself, has 608 career receptions. We are not equating experience as being the only measure of performance for wide receivers, but Wentz has somehow found himself throwing to players who have very little of it — and whose careers don't seem to pan out — on a regular basis.

Could this be that the worst trio he's ever thrown to? There actually is room for some debate on this, because over the course of his career he has had some truly dreadful injury luck with receivers.

That paired with some missteps from Howie Roseman with regard to drafting pass catchers, and Wentz has rarely had a ton of talent around him to throw too.

Let's start at the beginning, when Wentz was a rookie and throwing to Jordan Matthews and Nelson Agholor as his top two receivers. Both were OK, I guess, but I wouldn't expect either to get any kind of standing ovation upon a return to Philly after their playing days are done.

Back in 2016, Wentz's secondary receivers were Dorial Green-Beckham, Josh Huff and Bryce Treggs. And somehow, he put together a decent rookie campaign.

His best season — the Super Bowl-winning 2017 season — was probably the one where he had the most consistency with Alshon Jeffery and Torrey Smith leading the way. But things got ugly in the seasons after.

Back in 2018, Nick Foles went 1-1 at the helm — before the franchise quarterback took over in Week 3. He did not exactly take over a finely-oiled machine as far as the offense goes, as an injured Zack Ertz was replaced by Joshua Perkins at tight end, and the receiving corps was pretty lacking as the defense helped lift the Eagles over the Colts. Here were the top three wideouts (by snaps):

Aiken never played another NFL game after Week 5 of the 2018 season, Matthews bounced around for two more seasons but never made an impact, and Agholor, well, you know what happened to him.

We won't get into the ins and outs of roster construction each season, but there are two more instances we are interested in highlighting.

On September 15, 2019 the Birds played the Falcons (in Week 2). Wentz's top wideout targets were:

Agholor had a pretty good outing against Atlanta (he had 102 yards) before his brutal drop at the end of the game. The next week brought about the birth of the "Unlike Agholor" meme and 2019 was his last season in Philly, as he was let go this past offseason because, well, he wasn't playing like a first-round pick. Hollins and JJAW gave Wentz almost nothing to work with the the aforementioned game, combining for six catches for 54 yards on 12 targets (one of which was intercepted).

Starting two young and unproven players doesn't necessarily mean Wentz has no support. But these two proved they are not serviceable NFL starters. JJAW remains a problem for the Birds, while Hollins was released last season before signing with the Dolphins.

And then, of course, was Week 17 in 2019. Ertz was out, so Perkins was the No. 2 tight end. And the following were Wentz's top three receivers (in a game he won to give the Birds the NFC East title):

So what conclusions can we draw? Wentz is clearly no stranger to playing with wide receivers that wouldn't make most other NFL rosters. But he's had very mixed results. Sometimes he's able to lift the team on his shoulders and make the players around him better. Other times, he exacerbates their shortcomings by making bad decisions, holding the ball too long or forcing things after the drop epidemic that's plagued Philly in recent years.

One cannot help but wonder whether Wentz would be having a better career if he was surrounded by better talent, by either Roseman and the front office or by the football gods who have punished the Birds with so many injuries.

We'll never know for sure, but we do know it really doesn't matter this Sunday. Wentz needs to play well, or else he may not only lose another game for the lowly Eagles, he could lose his starting job.