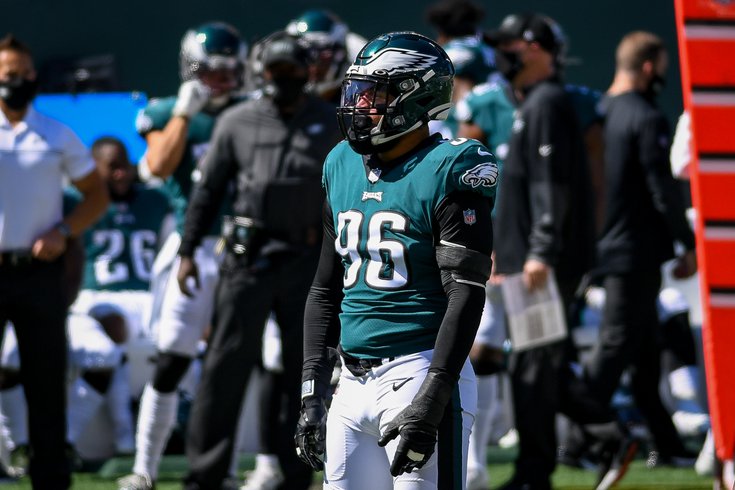 The Eagles need Derek Barnett and the Eagles' defensive line to build on a good performance last Sunday.

Ugh. With the Philadelphia Eagles sitting at 0-2-1 and playing like one of the worst teams in the NFL, it is going to be difficult to look forward to upcoming games, from a matchup perspective. For some, winning games might not even be a good thing, long-term.

Still, pathetic as this fact may be, the Eagles are only a half-game out of first place in the craptastic NFC East, so we'll forge ahead with our five matchups to watch against the San Francisco 49ers. Philadelphia is a full touchdown underdog (+7) according to consensus lines at TheLines.com.

The Eagles' best chance of winning this game is if they can get consistent pressure on the quarterback, whether that be Jimmy Garoppolo, or Nick Mullens (likely Mullens). Last Sunday against the Bengals, the Eagles' defensive line was dominant, as the defense sacked Joe Burrow eight times, and hit him 18(!) times.

On average, Mullens has gotten the ball out, from snap to throw, at 2.68 seconds, per the NFL's NextGen stats. Garoppolo has gotten it out at 2.75 seconds, on average. Those are both middle-of-the-pack averages, though the Niners' offense is built on the run game and a quick passing attack.

The Niners have a pair of very good offensive tackles in LT Trent Williams and RT Mike McGlinchey. They are more susceptible, however, to pressure on the interior. Usual starting center Weston Richburg is on the PUP list, and Ben Garland has filled in. The guards, LG Laken Tomlinson and RG Daniel Brunskill, have made the interior of the Jets' and Giants' lines look good the last two weeks, despite what the scoreboard might say.

Brunskill is particularly vulnerable. He was a former tight end who weighed in at 273 pounds at the 2017 NFL Combine.

The Niners currently list him at 300 pounds, perhaps generously, but he is still the type of undersized interior offensive lineman that Fletcher Cox has been able to dominate in the past. Here he is getting his quarterback killed against the Jets.

We often point out interior OL matchups the Eagles should win, but don't always win. They kinda have to win this one on Sunday.

2) The Eagles' run defense vs. the 49ers' rushing attack

Not to be all 1970's football guy here, but like the Rams game two Sundays ago, this matchup defensively for the Eagles must start with stopping the run. The Niners were the second-most run-heavy team in the NFL last year, in terms of run:pass ratio. That is their identity, and it sets up everything else that they do offensively. They have a creative run scheme, and when it's working, they are able to take the pressure off of their average quarterbacks.

They'll head into their Week 4 matchup against the Eagles undermanned at running back.

"We really don't concern ourselves too much with their injuries," Jim Schwartz said on Tuesday. "Everybody's dealing with that in the NFL. I think the biggest thing there is their scheme has a long track record. We played that scheme with the same head coach, same offensive play caller in 2017, going back to Atlanta in 2016. In my career going back, before that I was in Buffalo and Kyle [Shanahan] was in Cleveland and he was in Washington when I was in Detroit. So I think there's so much of that, it's really just a matter of different players at those different positions.

"There's been some changes since 2017, obviously when they have different guys in there, but whether they have a running back that's started the season or a guy that's coming off the practice squad, it really doesn't change what they're trying to accomplish in the game."

In Week 2 against the Rams, the Eagles allowed 191 rushing yards to the Rams. Anything remotely close to that is not going to be acceptable this Sunday, no matter who is running with the football.

3) The Eagles' linebackers vs. the Niners' short-to-intermediate passing attack

Last Sunday, Mullens picked apart the Giants' defense all day in the short-to-intermediate parts of the field.

Obviously, the best player on the offense is George Kittle, who is banged-up and might not play. Whether he's a go or not, the Niners want to live in that area of the field, which puts a lot a lot of pressure on the opposing defense's linebackers.

Nate Gerry has been brutally bad in coverage the last two weeks, and could will be vulnerable against this scheme.

UPDATE: Kittle is expected to play, so, yeah.

As you know, the Eagles are without three offensive line starters, in LT Andre Dillard, LG Isaac Seumalo, and RG Brandon Brooks. Filling in for them are the ghost of Jason Peters, Nate Herbig, and Matt Pryor, respectively.

Peters might be cooked, and he could struggle all year no matter who he faces, but at least that won't be Bosa this Sunday. We'll have to wait until next Sunday for a really bad mismatch between Peters and the Steelers' Bud Dupree. Still, I'll take the Niners' D-line depth over the Eagles replacement O-line.

OK, so that's not really a matchup, per se, but the Eagles are committing penalties, they're missing easy throws, they're having blown assignments defensively, special teams mistakes, etc etc. In my opinion, the Eagles should stop being dumb. #Analysis. Doug Pederson agrees.

"Right now we're not a very good football team, as I said after the game, we're not very smart," Pederson said on Monday. "We're shooting ourselves in the foot. We're leaving touchdowns on the field offensively, and we're just not executing. And those are things that we're going to really look hard at this week, and if we have to simplify, we'll simplify. If we have to go up tempo, we'll go up tempo, things that have been successful in the past."

During Schwartz's presser on Tuesday, he mentioned thinking of the opponent as being "faceless." I'm pulling an excerpt from a much longer quote here, but Schwartz said, "Coach Pederson says all the time, tells us, 'Hey, it's a faceless opponent, it's a faceless opponent.' Your challenge in a lot of ways is operating efficiently and doing what you do."

When you're 0-2-1 and nothing is going right, it's perhaps wise indeed to focus on some of the simpler things you have done well, put them in the game plan, and execute those simple things, if for no other reason than to set a foundation you can build upon.