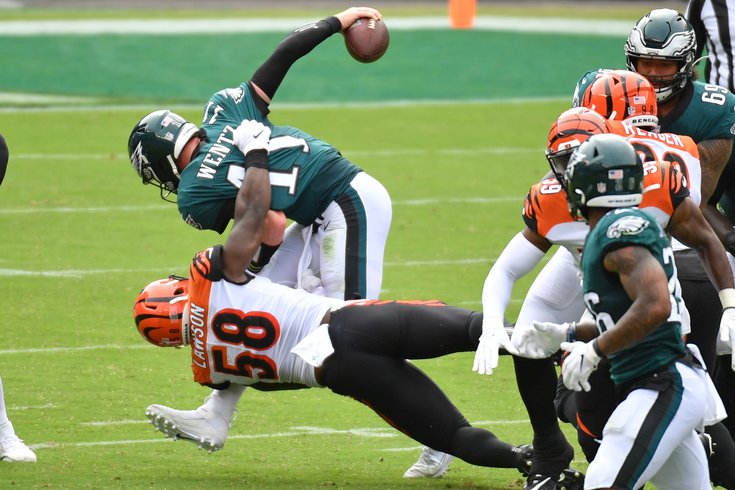 In any other sport, three bad games in a row would be a blip. An aberration. Nothing to be worried about.

But in the NFL, three games makes up nearly 20 percent of an entire season. And seeing as though only six NFL teams have ever made the playoffs after an 0-3 start, the Eagles and their fans are rightfully hanging on every single throw, sack and incompletion thrown by the face of their franchise Carson Wentz.

The Eagles, of course, avoided the 0-3 blemish, but being 0-2-1 is pretty close to being just as bad.

"I don't think I've ever been a part of a tie," Wentz said postgame. "It's kind of an awkward way to end the game."

From a viable MVP candidate (he started the season with the sixth best chance to win NFL MVP, according to TheLines.com's consensus odds — which have obviously plummeted since) and borderline first-tier quarterback over his first four seasons, Wentz has transformed into just a run-of-the-mill, turnover-prone signal caller who sometimes makes a flashy play.

We've seen a bevy of "game manager" quarterbacks succeed in the NFL, but that's not what the Eagles signed up for, or what they want to pay $128 million. And one might argue, that's no longer good enough to win Super Bowls in a league that boasts Patrick Mahomes, Lamar Jackson and other stars leading contending clubs.

Wentz, in Year 5, probably is who he is. A quarterback with a lot of skill and talent, but who is simply unable to reach his full potential for whatever reason — be it injury-related, mental or physical.

It's hard to deny the troubling trend above. How many similar games will it take before he runs out of slack, with Jalen Hurts (and, if things are bad enough, perhaps the Trevor Lawrence sweepstakes) threatening to take his job?

(It's worth mentioning that while Wentz and Co. were unable to manufacture any points and forced to settle for a mundane tie, Nick Foles took over in Chicago and led the Bears to an epic comeback victory).

In Sunday's tie against the Bengals, Wentz gave a few reasons for optimism, but almost all of them were neutralized by some kind of setback.

Wentz was most notably impressive on the ground, where he ran for his most yards in a game since his 2017 injury (65). His most beneficial decision of the game was to keep it himself, late in the fourth quarter needing a touchdown to tie. With under 30 seconds to play, Wentz called his own number after seeing no receivers open from the 7-yard line. He dove into the end zone to force overtime.

"He battled, he was tough," head coach Doug Pederson said. "He had some tough runs. He had the scramble for the touchdown and played physical, and that was one of the things we took away from that."

Wentz escapes the pressure and picks up the first down! #FlyEaglesFly

Wentz has held on to the ball way too long in many key spots so far this young season, most notably in the season opener where he was drilled for a career-high eight sacks. The mindset of being able to evade every single would-be tackler is one that can be detrimental. Wentz did throw it away a few times when he was under pressure in Week 3, but the killer instinct to be aggressive has been one of the biggest recognizable reasons for his struggles as more often than not this season he's been unable to escape.

And then come the turnovers.

His two interceptions were inexcusable against Cincinnati. In his first, he really had no chance of completing the pass. It was a bad throw and perhaps a bad play call with the run game working and a third down and short to go.

"The first one I felt good about," the quarterback said, albeit before getting to sit down and really study the film. "The ball gets tipped at the line, it's a bad feeling seeing the ball fatter throughout the air. The guy made a good play."

However, after seeing the replay, it appears that pass might have been intercepted even if it wasn't deflected.

Wentz can turn it over in more ways than one. A fumble (the 51st of his career), that was thankfully recovered by Jason Kelce very late in the first half, could have been worse than it was.

With the Eagles driving for some late points and grooving in the two-minute drill, the Carl Lawson strip sack definitely threatened what could have been a lead-taking drive. They did ultimately take the lead, as a blown coverage left Greg Ward so open Jimmy Kempski could have hit him for a TD with a layup throw from the press box.

There are also a noticeable number of missed easy throws, and overthrows down field — including a few key misses, like one that would have been a touchdown if it was a little more catchable for Miles Sanders late. Or DeSean Jackson early.

"Some of them are communication [errors], some of them are guys making good plays," Wentz said, "I have to be better and I know that and I will be. I'll learn from that, that's all I can say."

With the Eagles driving, looking to overcome a relented touchdown that put them behind 17-16, Wentz made another horrible mistake, throwing it to the other team for a second time and eventually leading to three more points for the Bengals (thanks to a red zone stand from Philly's defense).

If Wentz was getting unlucky, or was trying to thread the ball into small windows and being aggressive that would be one thing. But the throws Wentz is making right now harken back to ones he made as a rookie — and that's enough to have the Eagles looking like a bottom feeder in the NFC, rather than a contender for a relatively mundane NFC East.

The 27-year-old looked no better in the Eagles' first drive in overtime, nearly throwing a third interception against his own end zone before whiffing on a screen pass to Miles Sanders. The defense got the ball back for Wentz a second time, where the good version of Wentz connected with Zach Ertz for a bomb before a slew of penalties forced yet another punt — which was irradiated by a great defensive stand to get the ball back for Wentz one last time. In his final drive with the ball, Wentz was able to get the Eagles into range for a potential game-winning field goal from Jake Elliott, but a false start penalty on Matt Pryor pushed it from a 59-yard attempt to a 64-yarder. Pederson then curiously (cowardly?) opted to punt with 19 seconds left in overtime, all but guaranteeing a tie.

Wentz' supporters — and there is nothing wrong with being a fan of a quarterback who has shown so much promise and dynamic play-making ability — will cite the fact that he's been continually forced to play with depleted receiving corps and offensive lines.

With three-fifths of their projected starting O-line currently out, and with Jalen Reagor out after getting thumb surgery (and DeSean Jackson more or less injured every week), as well as a recent Dallas Goedert injury, Wentz has not had the support he was counting on personnel-wise.

"Losing a guy like Dallas, who plays a huge role in protections, the run game, he's a playmaker with the ball in his hands and down the field. Losing him, we had to make some adjustments on the fly," Wentz said. "And losing DeSean [Jackson] at halftime was tough as well. It's definitely challenging in the middle of the game."

But in nearly the same injury-plagued climate, Wentz was able to lift a rag-tag practice-squad group of skill players to an NFC East title last season. Injuries or not, Wentz should be able to lead this group of players to wins over lowly Washington and Cincinnati.

A tie is technically better than a loss. Maybe they'll build off it and Wentz will return to his former star-worthy form. Time is running out if he doesn't.