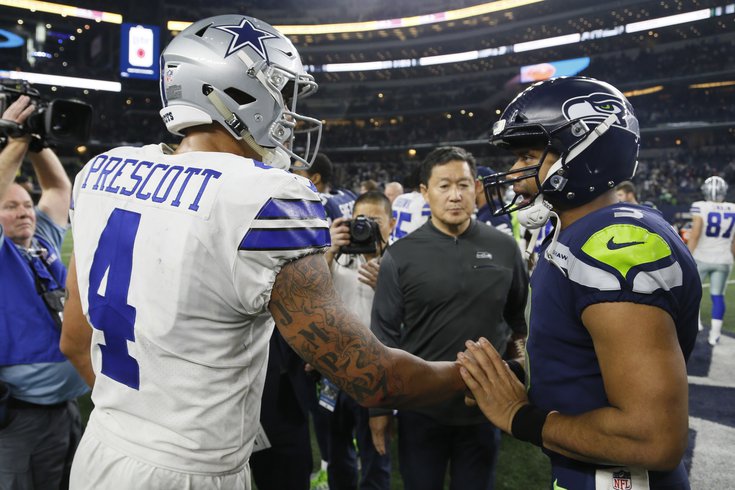 Russell Wilson reminds Dak Prescott that shaking hands was a silly social norm before COVID, and an outright dumb one in the middle of a pandemic.

In case you're new this year, each week we take a look at all the other games going on around the league, and point out the outcomes that will favor the Philadelphia Eagles. Usually, we do so based on a projection that they are playoff – or even Super Bowl – contenders.

For one more week we'll pretend that this team is a playoff contender. If they lose to the freaking Bengals, it might be time to start rooting for them to be bad enough to (a) be sellers at the trade deadline, and (b) land as high of a pick as possible in the 2021 NFL Draft. But let's wait until that actually happens. Ideal winners bolded.

• 49ers at Giants: You would normally pick against the divisional rival here, but the Giants aren't going to win more than 5 games, so don't worry about them. The 49ers, meanwhile, could have a hard time getting back to the playoffs with their absurd accumulation of injuries, so maybe it's just better if their season starts to go sideways, thus opening up more opportunities for a wildcard? It's also worth noting that the Eagles play the Niners next week, and with Jimmy Garoppolo out there's a decent chance they'll face backup QB Nick Mullens, so it maybe wouldn't be the worst thing if Mullens heads back west lacking confidence after a loss in NJ?

• Football Team at Browns: Take the AFC team over the divisional rival, obviously.

• Titans at Vikings: Ditto. The Vikings are in the same boat as the Eagles, by the way, in that they are 0-2, and potentially looking at a really ugly season.

• Texans at Steelers: I'm not so sure it matters who wins this game, but it's just worth keeping an eye on, since the Eagles play the Steelers Week 5.

• Panthers at Chargers: Like the Giants above, the Panthers are unlikely to win more than five games this year, so just in case the Eagles' season continues to go horribly wrong, it's not the worst thing for the Panthers to pick up a win here and there, for the purpose of draft positioning.

• Lions at Cardinals: The Cardinals becoming a juggernaut in the NFC would not be an ideal development for anyone in the conference, really. They have a quarterback on his rookie deal, and they're scheduled to have a healthy amount of money under the cap in 2021.

• Cowboys at Seahawks: I believe that there's some merit in the belief that the Cowboys just running away with the division is the best thing that can happen for the Eagles this year, in that if the Eagles get far enough behind early in the season, they won't waste resources at the trade deadline thinking that they should be buyers. Hell, maybe they even do the right thing by trading players like Zach Ertz, Fletcher Cox, and DeSean Jackson for draft picks. But again, we're not quite there yet.

• Packers at Saints: Are the Saints also cooked? That would be at least some consolation for Eagles fans who would enjoy some company for their misery.