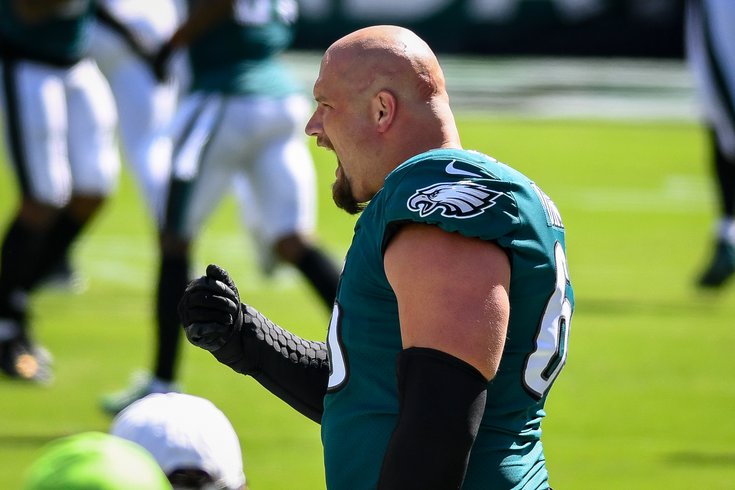 Lane Johnson is excited for another Eagles chat with Jimmy Kempski

After all, falling to 0-3 with losses to Washington and Cincinnati — and with upcoming games against San Francisco, Baltimore and Pittsburgh — will put the Eagles in a hole that might be impossible to climb out of.

The good news for Philly fans is that this is a game their team is expected to win. They're playing at home. They're favorites (five points, according to TheLines.com's consensus odds). And their backs are against the wall. They've typically done pretty well in such situations in the past.

With kickoff quickly approaching, let's take a look at what the so-called experts have to say about the Eagles' chances on Sunday. It's time for our weekly prediction roundup...

• PhillyVoice staff: Six of our seven writers are picking the Eagles, with yours truly being the lone exception. Here's a snippet of what Jimmy Kempski, who picked the Eagles (probably against his better judgement) had to say...

Continuing to pick the Eagles reminds me of the episode in Arrested Development in which we see a young Michael Bluth continuously being let down by his father, who had promised to take him fishing.

• Inquirer.com: All four of their writers are picking the Eagles, including Paul Domowitch, who sees a comfortable 38-17 win for the Birds.

There is no shortage of reasons to believe the Eagles will lose to the Bengals and slip to 0-3.

And yet, I don’t think that will happen. Not only do I not think it will happen, but I also think the Eagles are going to win this game handily. And believe it or not, I had this as a loss in my preseason predictions.

The Bengals defense isn’t very good, particularly against the run. The Browns rushed for 215 yards against them last week. The Eagles should be able to do the same with Miles Sanders and Boston Scott. ...

• NJ.com staff: Six of their seven writers are picking the Birds, including beat writer Mike Kaye. Here's what he had to say:

The Eagles need to do everything and anything they can to avoid an 0-3 start. With Carson Wentz struggling and the defense looking pretty pathetic, the Eagles will need to rely on a keep-away ball strategy with the running game.

This matchup has Miles Sanders written all over it. After a strong performance in Week 2, look for Sanders to own the field in Philly on Sunday, as the Eagles finally land their first win of the season.

• Bleeding Green Nation staff: There's usually a lot of Eagles love over at BGN — and there still is — but after two straight weeks of all Philly picks, two of their writers are picking a Bengals upset in Week 3

• ESPN staff: As of this writing, just eight of their 10 experts have made picks, but seven of those eight are picking the Eagles.

Carson Wentz is missing layups; Joe Burrow doesn't have any. The Eagles' defensive reinforcements should be rounding into form; the Bengals' Geno Atkins remains nowhere to be seen. It's hard to overstate how bad the Eagles' offense has been through two weeks -- the unit currently ranks dead last in efficiency -- but Miles Sanders should run wild in a matchup designed to soothe the Philly faithful. Even better: 1-2 might be good for first place in the NFC East by the end of the weekend.

• CBS Sports staff: All eight of their experts are picking the Eagles to pull it out over the Bengals, including Pete Prisco, who sees a 31-23 win for Philly.

Both teams are 0-2, but it wasn't expected for the Eagles. They have been awful in two games. Joe Burrow has done some good things early, and the Eagles have struggled in a big way on defense. The Bengals have defensive issues as well. Look for a high-scoring game with the Eagles getting back on track.

I’m buying Joe Burrow, and I’m selling the Eagles. Until they lose enough games to finally wake up.

Carson Wentz has looked like a mess so far this season. I’m not expecting him to look great, but he should be better against a suspect Bengals Defense.

• SB Nation staff: It's it a bit more even over at SB Nation, where just six of their 10 prognosticators are picking Philly.

... Wentz is talented enough to suddenly break out and save his team's season against a defense that surrendered 35 points to the Cleveland Browns in Week 2, but Cincy's pass D has actually performed well thanks to strong early-season showings from defensive backs William Jackson III, Mackensie Alexander and Jessie Bates III.

Philly could instead control the game on the ground, but that makes a blowout less likely. On the other side of the ball, a weak linebacking corps could have trouble with Joe Mixon and Joe Burrow on the ground.

With home-field advantage unlikely to be a significant factor in front of no fans, this does have the look of a close game.

The Eagles have been outscored by 28 points through two games — the worst differential for any NFC team. Carson Wentz’s accuracy has been erratic, and the offense has no identity. According to EPA, the Eagles’ defensive performance last week was the worst of any team through two weeks. The Bengals, meanwhile, need better play from their offensive line and more explosive plays. One bright spot last week for the Eagles was their run blocking. This feels like a game where they try to calm things down and lean on a heavy dose of Miles Sanders.

Barring a tie, one of these teams is going to leave Lincoln Financial Field on Sunday in an 0-3 hole and with the inevitable feeling that its hopes for the season are dashed. The spread suggests the home team should be an easy pick, but the Eagles' brutal performances in their two losses suggest otherwise. The trends for these teams are moving in a way that's good for Cincinnati and bad for Philly.

The Bengals and Eagles each are having major offensive line issues for different respective reasons, lacking talent and lacking health. They have two gamers at quarterback in Joe Burrow and Carson Wentz. Both teams are trying to help their QBs with the running game and a lot of throws to the middle of the field. Both teams' linebackers and safeties are vulnerable. The Bengals will have trouble with the two-tight end sets and Miles Sanders' versatile skill set. The Eagles will have trouble inside and Joe Mixon's all-purpose game. The Eagles are the better overall team and will be have desperation at home to survive, but it won't be pretty or comfortable.