The Philadelphia Eagles' loss to the lowly Washington Football Team on Sunday was a bad one. #Analysis. But where does it rank among the worst losses of the Doug Pederson era? Just for fun, or maybe not so fun for many of you, I went back and compiled what I think are the 10 worst losses of the last half decade.

I should note that this should not be mistaken for some kind of commentary that Pederson is a bad coach. We're just using his tenure as something of a time frame for this exercise. Certainly, over the last five years, the Eagles handed out more awful losses to other teams than they have taken themselves.

The Eagles came into this game as 9-point underdogs, and yet, it started out with such promise. Cre'Von LeBlanc picked off Drew Brees on the Saints' first offensive play of the game, which was followed by a 7-play, 76-yard Eagles drive for a TD. The Saints quickly then went three-and-out, and the Eagles piled on 7 more points after 10-play, 75-yard TD drive. The Eagles had 14 points, and the Saints had only run 4 plays.

And then the Eagles' offense died. They only had 99 yards the rest of the day, as the Saints slowly but surely clawed their way back over the next three quarter, taking a 20-14 lead.

On the Eagles' final drive, they found some life, driving into Saints territory, before this happened:

That prompted some to proclaim that the Eagles would have won the Super Bowl, if not for that drop, in the same silly way some Philly fans are certain the Sixers would have won the NBA Championship if Kawhi Leonard's quadruple bouncer hadn't dropped through the net.

Over the last quarter of the season, Carson Wentz dragged a group of practice squad players to the playoffs, only to be knocked out of the game on the team's second offensive drive by a Jadeveon Clowney cheap shot.

The Eagles could get nothing generated offensively thereafter all day behind Josh McCown, and the Eagles' season was over.

The 32-14 score doesn't even capture how badly this game went for the Eagles, who were down 29-0 at one point late in the third quarter. But worse than the score was the effort (or lack thereof) on several occasions throughout the game, most notably by Zach Ertz, who jumped out of the way of linebacker Vontaze Burfict, who was trying to track down Wentz.

That was an inconsequential play during that game, but people noticed it, and Pederson was peppered by questions about the team's effort the following day in his press conference. Pederson would admit that "not everybody" played hard.

If the Eagles hadn't closed that season with a pair of wins, Pederson might have been one-and-done with the team, and the Eagles may not have ever won a Super Bowl.

This was a roller coaster of a game that the Eagles led 17-3 in the third quarter. The Titans, however, took the lead late in the fourth quarter, and a Jake Elliott field goal sent the game to overtime. On the opening drive in OT, the Eagles kicked a field goal, and then the defensive collapse was underway.

On the Titans' final drive, they converted three fourth downs, including a 4th and 15 on a coverage breakdown by Corey Graham. Many would have this game higher on the list of worst losses. I get that. But at least this was a decent Titans team, and the Eagles didn't play particularly poorly throughout the game. More than anything, it was really just one gut punch overtime drive that left the lasting memory.

This game was all about drops. Dallas Goedert dropped a sure TD. Nelson Agholor dropped a third down throw in Lions territory that led to a punt instead of likely points. Agholor also dropped a ball that he had already caught (nobody had touched him to force the fumble) that led to points for the Lions. Mack Hollins had a bad drop late in the game that would have probably put the Eagles into position to get points.

But even after a day in which the Eagles deserved to lose, they had a golden opportunity to steal a win, but...

This very bad Lions team would finish the season 3-12-1.

Much like they did Week 1 against the Football Team, the Eagles held a 17-0 lead, and eventually lost. In this game, however, all 21 of the Panthers' points came in the fourth quarter. A look at the win probability percentages as the game progressed, via ESPN: 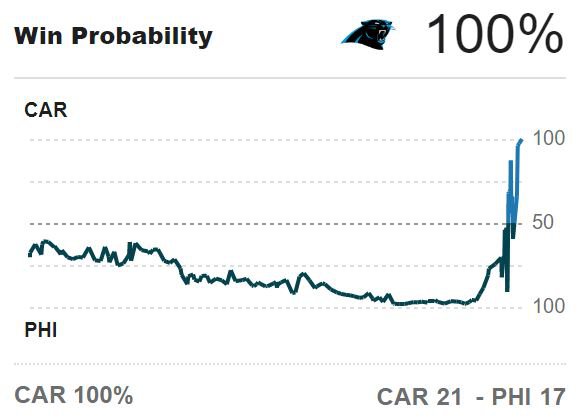 The previous week, the Eagles got smoked by the Vikings (we'll give that game an honorable mention) so badly that FOX cut away to another more competitive game. During the week of preparation for this game after that debacle, Pederson confidently proclaimed that the Eagles were going to go into Dallas and beat the Cowboys. Nope.

This became something of a signature game for the Eagles' receiver woes. In total, the Birds' receivers had 4 catches for 62 yards. Alshon Jeffery had 2 for 38, while Nelson Agholor had 2 for 24. That's it. Of course, Agholor also had this play that many thought he "alligator armed."

Personally, I just thought he was really bad at tracking the football.

Nothing much to say here. The Eagles just got their asses handed to them for four quarters. Some of you might have this game lower, because at least you knew it was over by halftime, and could make better use of your Sunday. Again, I get that.

In 2019, while they managed to win 5 games, the Dolphins were the worst ranked team in the NFL in DVOA, and by a considerable margin. By the time they had played the Eagles, they were not only bad, but they also had a boatload of injuries.

The Dolphins' plan of attack was to basically just chuck it high to WR DeVante Parker and TE Mike Gesicki, and let them go up and Moss the Eagles' secondary.

And the Eagles couldn't stop it.

Yep, the belief here is that the Eagles' Week 1 loss to the Football Team, arguably the worst franchise in the NFL, was the worst of the Pederson era. When you consider that fans were desperate for a distraction from the pandemic and/or the embarrassment that America has become, followed by a lot of "will they, won't they" play, the Eagles finally took the field, got out to a 17-0 lead, and then... fart noise.

MORE: McMullen: Eagles continue to walk fine line with Wentz | A look at the Eagles' eight sacks allowed, with gifs and stuff