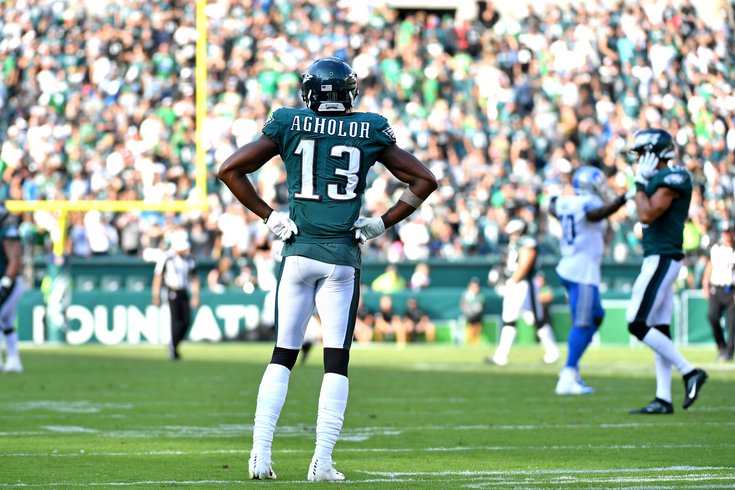 The Philadelphia Eagles are now off to a 1-2 start, after they dropped an ugly 27-24 game to the Detroit Lions, who did everything in their power to try to allow the Eagles to win.

By my count, the Eagles had at least five drops, and maybe six or seven depending on how you look at it.

• Nelson Agholor dropped a 3rd down pass that would have been a first down on the Lions' side of the field. In that spot, there's a better chance than not that the Eagles would have gotten points. Instead, they punted on 4th and 6 from their own 43. He also had a drop/fumble/whatever that was recovered by the Lions, who scored on the ensuing possession.

Yes, I realize he has the wrong number there. I made that three years ago.

• Jordan Howard had a drop over the middle on a play in which he'd normally be on the sidelines, but was in because Miles Sanders couldn't be trusted not to fumble.

• Dallas Goedert had a horrendous drop on what should have been a touchdown. The Eagles scored on that drive anyway, but it ate up extra time on the clock to do so. Somehow, this guy's video of his TV is the only replay I could find of Goedert's drop on Twitter, but the drop well so bad that it deserves to be shown, even without better video:

First time throwing to Dallas Goedert today and he drops it. Six right in the hands. #FlyEaglesFly pic.twitter.com/mFvYjJaNV2

• Zach Ertz had a drop over the middle.

• Mack Hollins had a ball that hit him in the hands late in the game. It was contested, but you'd like to see him make a play. I don't know if I'd consider that a drop, but he didn't help his quarterback.

• J.J. Arcega-Whiteside dropped what could have been a game winner. The defensive back didn't get a hand on it. He just dropped it.

JJ Arcega-Whiteside drops what would have likely been the game-winning TD pic.twitter.com/OYNv2AZh9B

MORE:  Eagles not making excuses for mistake-riddled loss to Lions

2) The 'I Hate the Football and Don't Want To Possess It Anymore' Award: Miles Sanders

At Penn State, Sanders averaged one fumble every 30.8 touches, which is obviously terrible, and was a considerable concern area heading into the pros. Sanders survived the first two games without putting the ball on the ground (though there were a couple shaky handoff exchanges).

Against the Lions, he fumbled twice. On the first fumble, Sanders got bailed out when Isaac Seumalo was able to jump on the ball amid a sea of Lions. When Doug Pederson stuck by his rookie and gave him another shot, he put the ball on the ground again, on the same possession, and wasn't as lucky. The Lions recovered, and kicked a field goal on the ensuing drive.

In the Eagles' Week 2 loss in Atlanta, Agholor had 8 catches for 107 yards and a TD. Except, you know, we all saw his awful drop on a play that should have won the game.

In Week 3, Agholor had 8 catches for 50 yards and 2 TDs, but he had a costly drop (as noted above) on 3rd down that killed a drive, and he fumbled after (maybe) making a catch in the second quarter, which led to a Lions TD.

The bad plays are far outweighing the good ones.

Wentz didn't make mistakes, and he put his teammates in plenty of positions to make plays, but when your receivers are dropping everything, you're down to your third LT at various points of the game, your special teams units give up a kick return TD, and your guys lose two fumbles, what can you do?

5) The Award for Excellence in Keeping the Opposing Quarterback's Jersey Clean: The Eagles' pass rush

The Eagles have two sacks so far this season, and none from their defensive ends. Yeah, maybe Michael Bennett wasn't the easiest guy to get along with, buuuuuut he was kinda good at football, and the Eagles could use him right now.

Hell, the Lions' pass rush had a two-play stretch today in which they had two sacks.

6) The 'Not So Special' Award: The Eagles' special teams

The Eagles scored on their opening possession, a nice 69-yard drive that ultimately ended with an unsatisfying field goal. On the ensuing kickoff, this happened:

On the return, L.J. Fort, a player who is only on the team for his special teams prowess (and who is costing the Eagles a fourth-round compensatory pick to stay on the roster) was on the ground as Jamal Agnew ran by.

With a whole slew of fans having already left the stadium, Jenkins gave the Eagles hope, with a blocked field goal. Jenkins is such a great player, and at times underappreciated, maybe even by the organization.

8) The 'Get Your Ish Together' Award: The officials

The officials are pretty far down the list of things to be mad about in this game, but there were a few screw jobs in there along the way.

• On the block in the back call on Jenkins on the FG return, the defender is hitting the brakes to come back to tackle Rasul Douglas, then turns his back to Jenkins when he sees him coming, at which point Jenkins tries to pull up and not block him in the back. It's a bang-bang play for sure, but this is ticky-tack as hell.

• And then somehow this near-decapitation did not draw a flag:

They scored 10 points in the first quarter. So there's that!

10) The 'Sideways' Award: The Eagles season

That's the direction it's going, after a slew of injuries, a very, very bad loss at home to a below-average team, and a road game in Green Bay on a short week. The Eagles are staring a 1-3 record in the face.

MORE: The good, bad and ugly from the first half of Eagles-Lions