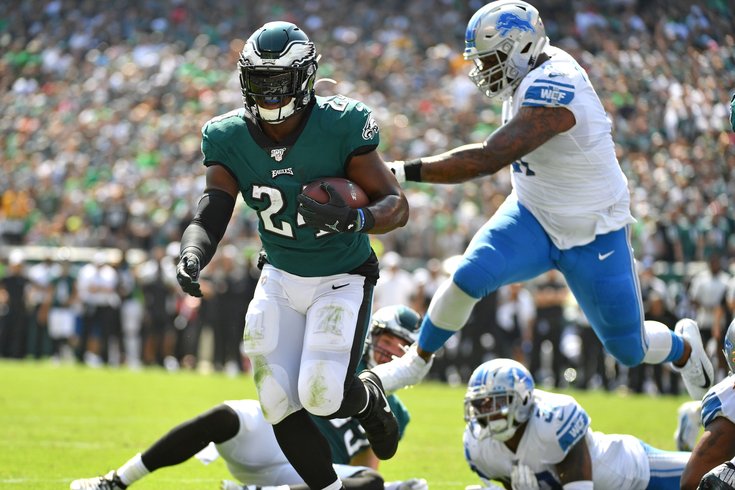 Philadelphia Eagles running back Jordan Howard (24) scores a touchdown during the first quarter against the Detroit Lions at Lincoln Financial Field.

The Eagles finally banished their first-quarter demons on offense, but turnovers from their skill position players ultimately have them trailing the Detroit Lions 20-10 at halftime.

Here's what I saw in the first half, which featured good play from Carson Wentz with few positives elsewhere.

• The Eagles have not been able to get the run game going much this season, and play design seems like it has been a huge factor. A lot of the team's designed runs have been sideways, slow-developing plays that necessitate perfect execution to open up a hole for the runner. Miles Sanders and Darren Sproles are both shifty, but they're having to dig out of holes on almost every handoff.

But the Eagles finally did what a lot of fans have been asking for all season — they gave Jordan Howard the ball and let him go to work.  Relegated to bench duty for much of the first three games, Howard made an immediate impact as soon as he got a shot against Detroit, and he even gave a lift to the crowd by absolutely truck sticking a Lions defender on his first carry.

And instead of getting cute around the goal line later on the same drive, Pederson put the ball back in Howard's hands so that he could waltz in for a one-yard touchdown. When Howard has gotten touches, good things have generally happened for the Eagles. Sometimes it's that simple.

• The use of tempo early in the game was a welcome sight after watching the Eagles sleepwalk through the opening minutes of their games against Washington and Atlanta. It also came attached to a more aggressive offensive philosophy, with Carson Wentz taking more shots down the field instead of trying to dink and dunk the Eagles to the endzone. More of that, please.

• Carson Wentz's first-half performance was an encouraging sight after two weeks of brutal openings for the offense. The full package was on display, with Wentz hitting players for quick hits over the middle, longer shots over the top, and extending plays with his legs when protection broke down around him.

This is the Wentz everyone expected to see when he was being talked about as a potential MVP candidate this season. He looked completely in control of the game, which unfortunately didn't end up mattering much with all the mistakes being made elsewhere.

It's probably not a coincidence that his assertiveness was connected to the best Zach Ertz half of the season. Wentz's preferred target was creating acres of separation from Lions defenders, and whenever Wentz needed somebody to get open on a critical third down, it always seemed like Ertz got the job done.

• I'm not sure what the cost is going to end up being to obtain Jalen Ramsey, but I have a feeling if Eagles fans have to watch another week of Ronald Darby, they are going to be willing to throw in the Liberty Bell if it gets the deal done.

A week after getting picked on for almost 60 straight minutes by the Atlanta Falcons, Darby was targeted early and often on Sunday, and it helped the Lions move the ball down the field with very little resistance. It doesn't seem to matter which of the young corners they line up on the other side of Darby, teams seem to be actively hunting him and striking gold when they do.

Perhaps someone should alert Jim Schwartz to this development.

• Philadelphia's injuries on the defensive interior really showed up during the first half on Sunday. This is a Detroit team the Eagles should be able to bully up front and turn into a one-dimensional unit, but they were unable to create much leverage at the point of attack, and it allowed the Lions to get some momentum going on the ground.

This is going to be a trend to monitor long term because Malik Jackson is out for the season and Tim Jernigan is expected to miss around a month or more with a broken foot. Odds are they're not going to get impact replacements in the meantime, so someone is going to have to step up and make up the difference.

• It's bad enough that the Eagles are without their top two receiving threats, they do not need Nelson Agholor to revert to the form from his rookie year when you expected him to drop every ball thrown his way. A week after putting the potential game-winning touchdown on the turf, Agholor had a bad drop on what should have been an easy first down for the Eagles in the first half.

Agholor made matters even worse when he killed another drive at the end of the first half with a fumble, turning what looked to be a scoring drive for Philadelphia into another opportunity for Detroit to put points on the board before halftime. They don't exactly have a lot of options to turn to outside of Agholor, so they need him to get his act together ASAP. I wouldn't hold my breath.

• Consider the musings about Howard at the top of this article a setup for this question — what in the hell was Pederson thinking force-feeding the ball to Miles Sanders? I understand he has promise and he's a young player they want to develop, but Howard had it going early against Detroit, and Sanders had already put the ball on the turf once when he coughed the rock up a second time, leading to a costly turnover for Philadelphia.

Howard may not be much of a threat as a receiver, but if Sanders isn't going to protect the football, it is an absolute no-brainer to play the veteran over him. Ball security is as important as any job a running back has.

• The NFL has done everything they possibly can to minimize the importance of kickoff returns, mostly because of player safety concerns. So giving up a kickoff return touchdown moments after scoring your first first-quarter points of the season is a real punch to the gut.

• If you had Derek Barnett in your "Which Eagle will be the first to hit the medical tent?" pool, congratulations on your winning ticket. Hopefully, it's not a serious issue.

• The Lions picked up a critical first down on their first scoring drive of the game on one of the most absurd spots I can remember seeing. I am generally against challenging spots because the success rate on overturns is extremely low, and it may have been a first down in any case, but that was an absolute joke of a spot in any event.

• Jason Peters retreating to the sideline is never what you want to see, but the Eagles are actually reasonably prepared for the situation this year thanks to their selection of Andre Dillard. At least they were, up until the moment Dillard went down with his own issue midway through the second quarter, limping off to the medical tent.

One of you reading this story might have to suit up by the end of the season, so make sure you're eating your Wheaties and hitting the weight room.

• Missed calls happen in NFL games, but the missed facemask on Sanders' kickoff return late in the first half is one of the most ridiculous and dangerous missed calls I have ever seen in a football game. Sanders was fortunate not to suffer a serious head or neck injury as a result of that play, where his helmet was grabbed, twisted around 180 degrees, and then taken off of his head.

#Eagles’ Miles Sanders is ok after this. Thank goodness for neck day in the weight room. pic.twitter.com/N9CFaR4dkl

That should be a disqualifying missed call for the crew. Just absolutely unacceptable.