Eagles not making excuses for mistake-riddled loss to Lions 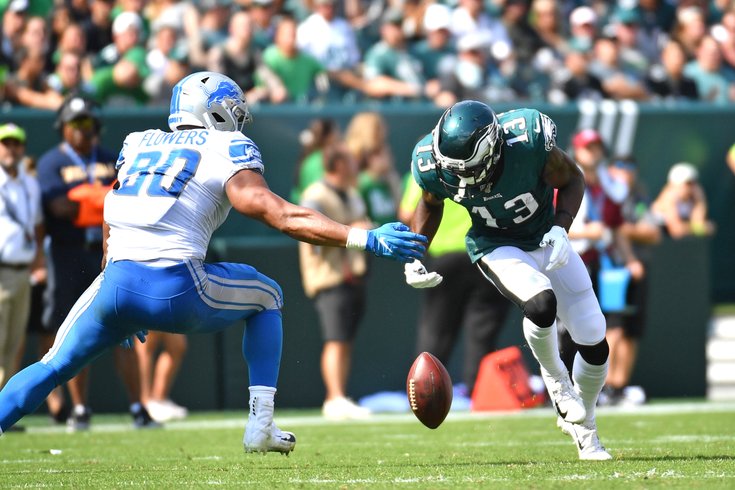 Eagles WR Nelson Agholor fumbles the ball in the first half against the Lions.

Never has it been more true: the Eagles beat themselves on Sunday.

Sure, the Lions get a 'W' for their effort, but the injury-weakened Eagles were the better team in Week 3's 27-24 loss, and squandered opportunity after opportunity to eek out a victory.

"There were a lot of self-inflicted wounds today," Brandon Graham said after the loss. "We were playing from behind again."

And while playing from behind, the Eagles dropped seven catchable passes, fumbled three times and committed costly penalties in key situations. They also allowed a 100-yard kickoff return touchdown that halted momentum from a productive, scoring opening drive. It didn't matter who was on the other sideline — the Eagles know they can't win that way.

"We're going to continue to keep going," Miles Sanders, the culprit not once, but twice fumbling the ball Sunday, said. "I am not perfect. I try to be perfect, but I can't let this affect me."

Sanders did indeed make two gigantic mistakes, but he came back to catch a 33-yard pass in the second half while leading the Eagles with 73 receiving yards.

That he was catching deep passes to begin with brings up another reason Sunday's loss was so disappointing: they nearly overcame an offense that lacked the team's top two receivers in Alshon Jeffery and DeSean Jackson.

JJ Arcegia-Whiteside had victory (or at least a tie pending a game-tying field goal) in his grasp on the Eagles' last drive of the game, with a perfectly thrown ball from Carson Wentz slipping through his outstretched hands near the end zone.

And even from the rookie wideout, there are no excuses made.

"I have to go get it," he said. "It was tight coverage, I wanted to elevate, I was expecting contact. It ended up right there. I have to make the play."

"You can't make excuses," said Nelson Agholor, who fumbled once himself and dropped a key third down pass. "We had opportunities on balls we were supposed to make plays — that s**t hurts. We love this game, we practice hard, we have to make plays.

"The only one I can control is mine. I wish I didn't add to those mistakes because you can't turn over the football."

Philly is minus-2 in turnover ratio right now, with five giveaways and three takeaways. Perhaps they can help put a dent in those numbers Thursday night, when the Eagles head to Green Bay on just three days rest for their Week 4 game. But Green Bay has an NFL best plus-6 turnover differential — so good luck with that.

"The short turnaround, we are just forgetting these last two games," Dallas Goedert, who dropped a pass in the end zone, said. "We have to finish what we have to finish and we are looking forward to going out and dominating out there."

Overcoming adversity is nothing new for the 2017 Super Bowl champs, who had a Pro Bowl caliber injury list by January. They have the same right now, and Graham and company are ready for the challenge.

"We just have to go into their place and win on the road," he said. "Standing tall through it all, we are going to believe through the end. So much happens during a season… I am not worried about nothing we've only lost two games."